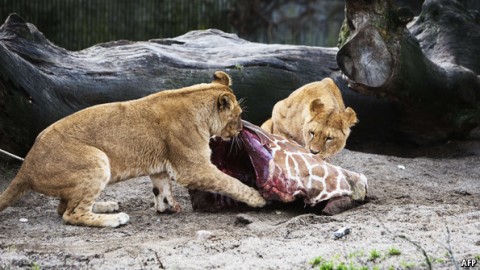 What happened to Marius the giraffe (via The Economist)

What the fuck does Denmark have against baby giraffes named Marius? You may remember the widely publicized slaughter and butchering of baby Marius, a giraffe from the Copenhagen Zoo in Denmark. Right in front of kids, the giraffe was murdered with a bolt-action rifle and then dismembered and fed to lions. Why? Well, according to his keepers, his genes weren’t up to par or something. Now there is speculation a slightly older giraffe, also named Marius and also residing in Denmark, will share a similar fate at the hands of the Jyllands Park Zoo.

While not actually endangered, some could easily find issue with them slaughtering a baby from a species whose members only reach around 5000 (see Reticulated Giraffe numbers), but Denmark zoos obviously have a different view on the matter. Endangered or not, little Marius was one of many descendants of the more successful and genetically well-represented giraffes and it would simply not be fair to let his genes continue to pollute the species. The only thing worse than eugenics is natural selection, after all.

Marius I most certainly was not tortured or directly abused prior to his death and Marius II, should it come to it, will likely share a similarly painless death. Nonetheless, Denmark’s view on animal welfare has always been a bit off track with others. In the U.S., the closest thing the we have for animal protection rights at the federal level is from the 1966 Animal Welfare Act, which really only deals with larger mammals used in research labs (birds, reptiles, insects and smaller mammals such as rodents are all exempt from this act) and does not even touch on issues of animal torture in slaughterhouses, animal fighting as sport, puppy mills or anything else of that sort. Granted, the U.S. is one of the few places someone can be sued for animal abuse if the owner of the animal in question wants to press charges for property damage.

Still, even this act is hardly protecting animals from suffering at the legalistic hands of humans.

Denmark, on the other hand, seems to view animal welfare quite differently. Most recently, Denmark made headlines by banning of ritualistic animal slaughter, which pissed off the Jews and smacked of anti-Semitism, but it’s good news if you’re cattle. While bestiality has been allowed since 1933 (no need for the animal to give consent as long as its owner is okay with it) and there are numerous animal brothels to be found, Denmark still outshines the US in terms of legal animal welfare. Most notable are laws regulating the treatment of animals in the fur and meat industries, as well as all manner of forced fighting, zoosadism and blood sport.

Denmark still comes across as a great place to make a living if you’re of the non-human sorts. While across the globe, all animals are considered either property or strays, allowing people to fuck other animals (granted that the animal doesn’t “suffer”) is a clear advantage. Apparently it’s even a thing with the Danes to utilize the Internet for animal-whoring, with private pimps offering up their pets for around $85 to $170 a pop.

For the late Marius, it’s interesting the public outrage that emerged amongst the excuses the zookeepers came up for utilizing his body for a gore show aimed at children. When questioned, the higher ups generally explained that the Copenhagen Zoo is tied with the now infamous European Association of Zoos and Aquaria (EAZA) and with it came regulations that entail them not allowing Marius to breed. And by Danish custom, not getting laid equates to a miserable life that one is surely better off not living. Marius II, currently living in the Jyllands Park Zoo, however, is not under the international regulation of the EAZA and so perhaps he will lead a horrid virgin life or have a nightmarish future of castration. It’s all up in the air for now.

On the bright side, it’s not like either of them were ever used like Stalin’s suicide bomber dogs, or Spain’s ceremonial toro embolado burning of live bulls or even America’s pre-nuke tests on animals during WWII. But given Denmark’s laws, they could have done much better than turn Marius I into lion steak. While Marius I was never given the opportunity to be a prostitute, the victim of military exploitation, or even an element of cultural torture/entertainment, perhaps there is luck yet for enlisting Marius II for one of many adventures humanity has to offer the rest of the animal kingdom. In the meantime, it’s probably a good idea to name your giraffes something else.