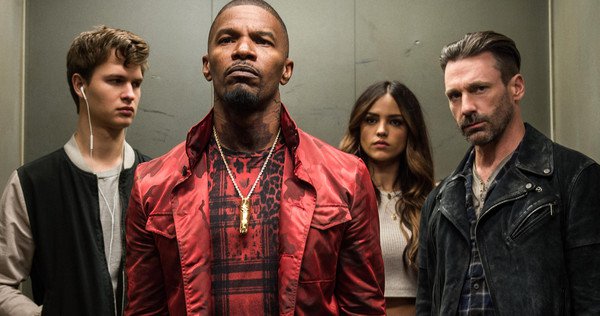 The best action movies are musicals. Musicals that swap out chorus line kicks and torch songs for karate chops and pipe bombs, but musicals nevertheless. Both genres, at their best, are about ruthless precision and bodies in motion.

By that reckoning, Edgar Wright’s Baby Driver is the year’s best musical. It’s also the year’s front runner for best action film, car film, and heist flick. And while it isn’t a comedy, it packs more laughs in less than two hours than most honest-to-God comedy films.

The story is classic heist movie boilerplate. There’s an ace professional who wants out of the game, but is stuck doing One Last Job. There’s a cold calculating mastermind named Doc (they’re always named Doc in these movies, going all the way back to Huston’s Asphalt Jungle). There’s a good girl inspiring him to go straight. And there’s a psychopathic, trigger-happy loose cannon who’s probably going to fuck up the whole operation.

On the surface, the basic plot is all too familiar. Even the character gimmick that Baby has (he constantly listens to music to drown out his tinnitus) calls back to a long tradition of Cool Criminals With Weird Habits. But that’s the beauty of the movie – you think you’ve driven down this road before, but it quickly swerves off track.

Wright makes magic out of genre conventions. Almost all of his previous films have taken tired and worn out genres like buddy cops (Hot Fuzz) and zombies (Shaun Of The Dead) and turned their leaden tropes into comic gold. Like a great jazz player, he doesn’t throw out the original song – he plays with the arrangement, adding in new beats and twists to the melody to mess with your expectations.

Like his other films, Baby Driver is a tightly constructed piece of work. Every car chase and action scene is choreographed with such precision that you don’t miss a thing – you get the Rube Goldberg-ian pleasure of watching each element of chaos roll into place (and promptly get smashed into pieces). It helps make Baby Driver stand out from other action/heist flicks that rely on shaky cams and whiplash editing to power through their set-pieces. It’s as much anti-Michael Bay in its approach to adrenalized thrills as his past comedies were a much-needed corrective to the Judd Apatow School of Let’s Improv For Two Months And Make This Damn Thing In The Editing Bay.

One of the most important aspects of the film is the way it uses music. The film is jammed with music — it often feels like a mixtape on wheels. But the way that the driving scenes are timed almost perfectly to the music, and how Wright uses the music as a way to establish relationships with the characters (the way Baby and Deborah bond over Beck & T-Rex, or the brief connection that forms between Buddy and Baby as they listen to Queen) gives the film the feeling of a musical. Nobody sings, but like all musicals the songs are used in moments where characters are feeling emotions too strong to express in mere words. And who needs Fred and Ginger spinning around on a dance floor when you got four wheel ballet?

Deep character work has never been a huge hallmark of heist flicks – most characters get backstories you can sketch out on a cocktail napkin. Baby Driver is no different; aside from Baby’s childhood, none of the other characters are given too much heavy lifting to do. They don’t need to – the cast does a great job giving their characters personalities. Even when they’re playing stock types, they feel fresh and distinctive: Jamie Foxx puts in his best work in years as Bats, aka The Loose Cannon; Jon Hamm finally gets a role that makes us forget about Don Draper; and Ansel Elgort & Lily James are perfectly cast as two crazy kids in love. Even Kevin Spacey, doing his usual cold motherfucker schtick, finds new layers in his fixer role with the way he alternates between paternal affection and violent insinuations.

Baby Driver is that rarest of mainstream movie beasts: a film where I can’t find a glaring flaw in it. It’s extremely entertaining, it doesn’t insult the viewer’s intelligence, it thrills us with something new and gives us enough genre comfort food to soothe us, and it doesn’t overstay its welcome (the film comes in just under two hours). If more films were like it, I’d be going to the movies every week.

Ashley Naftule is a writer, performer, and lifelong resident of Phoenix, AZ. He’s been published in Phoenix New Times, PHX SUX, The Hard Times, Runt Of The Web, Rinky Dink Press, Four Chambers Press, and blogs regularly for FilmBar. A Space 55 theatre ensemble member, he also does chalk art, collages, and massacres Billy Idol songs at karaoke. He won 3rd place at FilmBar’s Air Sex Championship in 2013. You can see more of his work at ashleynaftule.com