Taking A Long Walk Down Standish Lawder’s “The Corridor” 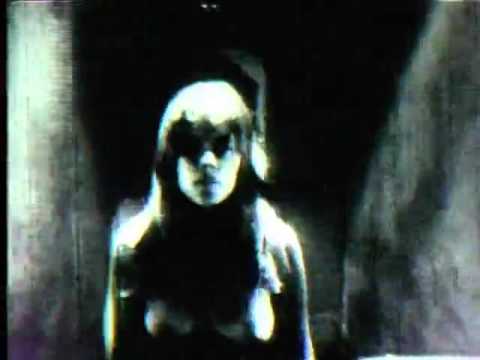 It starts on an ominous note. You, the viewer, are gliding slowly down a hallway. Far off in the distance is a small set of stairs leading to an open doorway – a perfect square of darkness on the horizon. Light suffuses the hallway, casting shadowy impressions on the walls that make them look thin and strained and permeable. Like membranes.

Music plays as you glide implacably forward, as though the darkness was pulling you into it. You can’t move, even if you wanted to – your perspective is fixed. Music surrounds you; it sounds like hearts beating. The lights on the wall seem to flicker in time with the beats. The shadows on the wall start to look like giant hearts pumping against paper-thin skin.

The music is electronic and bubbling, like those synth parts to all those Who songs you liked before they became CSI intros and now you fucking loathe them. It builds in intensity, sounding the way a plane sounds as it careens forward on the runaway. That sound a plane makes as it hurtles forward, seconds away from slipping the bonds of the earth. That sound that makes you feel like your stomach is flipping beneath your seat belt, wondering if the plane is going to dip down and grind into the tarmac or burst into flames before it ever breaks the clouds.

You float over the steps and pass through the black… and then you’re back. Back in the infinite corridor. But now there’s a woman walking towards you, naked and flickering in and out of reality. Her torso, head, limbs – her everything phases in and out. Here and not here – Schrodinger’s Nude Model, a Quantum Hippie Fox. She walks THROUGH you without a word. And then you’re back in the corridor again. And again. And again. For over 20 minutes.

That’s how Standish Lawder’s The Corridor begins. Released in 1970, the film is a masterpiece of Structuralist cinema. It embodies the traits that connect the works of fellow Structuralists like Tony Conrad, Hollis Frampton, Stan Brakhage, and Michael Snow: a preoccupation with light, flickering effects, a complete disregard for character and narrative, an obsession with unusual shot lengths and editing films in a rhythmic & hypnotic fashion, and treating the film itself as a kind of sculpture (which filmmakers like Brakhage took to the next level by painting onto film frames, carving images into film emulsion, and gluing detritus like insect wings onto the celluloid).

And like many Structuralist films, The Corridor is also trippy as fuck. Over the course of the film’s twenty minutes, Lawder keeps changing up the journey through the hall. He layers in ghostly and fractured superimpositions, creates weird exposures that makes the naked woman and hallway seem to explode with light, and varies the speeds in his tracking and zoom shots to make watching his film in one sitting a very disorienting experience. 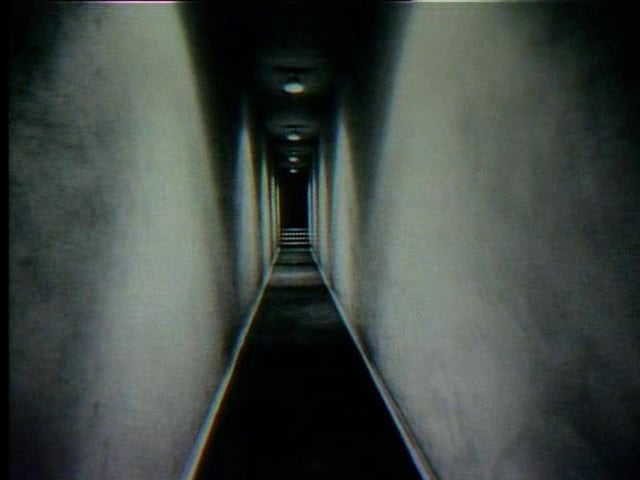 The psychedelic qualities of Lawder’s film aren’t accidental. While attending the University of Munich, Lawder became a test subject: the future filmmaker was injected with psilocybin, mescaline, and LSD in clinical trials. The drugs seemed to pour gasoline on a torch he was carrying for weird art and culture; Lawder went on to write an influential study on avant-garde cinema called The Cubist Cinema and married the daughter of Dadaist pioneer Hans Richter (who was also a filmmaker).

It’s not hard to see the influence of Cubism and the strange Dadaist films of Richter in Lawder’s The Corridor, which dilates and contracts like a kaleidoscopic pupil. Lawder achieved his dazzling and ectoplasmic light effects by building his own special contact printer. Placing an incandescent light bulb inside a coffee can, Lawder used a flashlight tube to shine light from the manipulated brightness of the bulb into the film gate of his camera.

Lawder’s light manipulations aren’t the only reason why The Corridor is such a hallucinatory experience. He collaborated with composer Terry Riley, who improvised a soundtrack for the short film. Riley’s score starts out eerie and haunting – it wouldn’t be hard to imagine a twenty minute version of The Corridor that’s just a nightmare crawl through a hallway without end. Like agent Dale Cooper running in circles around the same set of curtains in The Black Lodge.

The score quickly picks up in speed and feeling, turning into a bubbling and blissful bed of acid electronics. Strange sounds pop in and out of the mix at random, like a fluttering noise on the ten minute mark that could be film rolling in a projector or wings beating in the air. The music is the aural equivalent of a liquid light projection show – it’s slippery and translucent and constantly splitting open into new sections.

While viewing it projected on film is ideal (like so many Structuralist films, it’s designed to take advantage of the constantly shifting effects light can have on projected film), most of us don’t have the luxury of living near Anthology Archives or a film school with a respectable avant-garde archive. Luckily there are digital copies of The Corridor all across the web. It’s not the ideal way to watch it, but it’s better than nothing at all…

I can sing its praises all day long, but don’t take my word for it: experience the trippy qualities of The Corridor for yourself.

Ashley Naftule is a writer, performer, and lifelong resident of Phoenix, AZ. He’s been published in Phoenix New Times, PHX SUX, The Hard Times, Runt Of The Web, Rinky Dink Press, Four Chambers Press, and blogs regularly for FilmBar. A Space 55 theatre ensemble member, he also does chalk art, collages, and massacres Billy Idol songs at karaoke. He won 3rd place at FilmBar’s Air Sex Championship in 2013. You can see more of his work at ashleynaftule.com