Sir Charles Barkley Is The Tom Clancy of Basketball 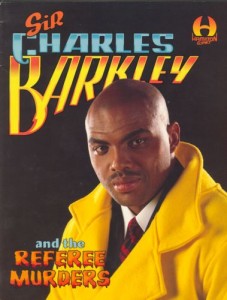 One of the greatest pieces of fiction in my library and one of the finest pieces of b-ball detective fiction ever written by man is undoubtedly Sir Charles Barkley and the Referee Murders. Before I begin describing it, let me just say that I highly encourage you to read it. I don’t remember where I got this from, but I think it was a garage sale. Charles Barkley in a Dick-Tracy-yellow trench coat immediately caught my eye.

For starters, it is a graphic novel. It is not very long, but it makes up for that with truly brilliant writing. As you may gather from the title, Barkley is tasked with finding a serial killer who only targets referees. He gets this mission from Michael Jordan, Chief of the National B-Ball Bureau of Detectivery (NBBBD), based out of Washington. Jordan and his right hand man Scottie Pippin have their hands full tracking a radical anti-b-ball terrorist group running loose on the east coast, so he assigns the grisly referee case to his most promising junior detective, Barkley. He tells him to be careful, because “even though you’re a damn fine cop, Chuck, you’re a loose cannon” (no joke).
So Barkley sets out and has a good detective adventure with writing almost worthy of Sir Arthur Conan Doyle, collecting clues throughout several major cities. One of the best parts in this trek is when Chuck confronts a local gang, looking for clues. They get to trash talking and one of the hoodlums pulls a knife out, but before he or his friends can do anything, Barkley leaps in the air to do a double reverse flash kick and yells “SHUT UP AND JAM.” 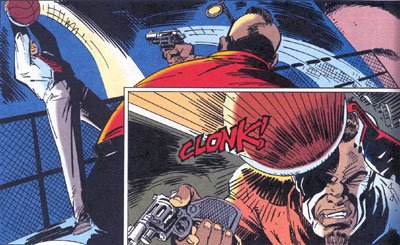 I’m going to go ahead and spoil it: Chuck finds out the anti-b-ball terrorists being hunted by Jordan and Pippin are behind the killings. Barkley seems out matched until the other two b-ballers show up, and they team up to take down the head honcho, who is none other than Dennis Rodman.

Just kidding, that would be too predictable. The head honcho is Larry Bird, who is upset with the NBA for denying him some honors or something. I think this is the only flaw in the novel, slight though it is, because Larry Bird is a b-ball loving fiend, and would no doubt be recruited by the NBBBD to fight b-ball related crimes.
Regardless of how you feel about Chuck and Larry Bird, you should read this book. It is your duty as a b-ball loving American citizen (or b-ball loving  citizen of any country, for that matter). Plus, you’ll get hipster cred.

More ‘deep’ thoughts from De’Lunula:
Eulogy For Your Internet Fame
LinkedIn is as Jealous and Insecure as my Ex-Girlfriend.
Complicated Books Summarized in Haiku Form