Trent Reznor vs. Nick Cave — What Makes Brooding So Appealing? 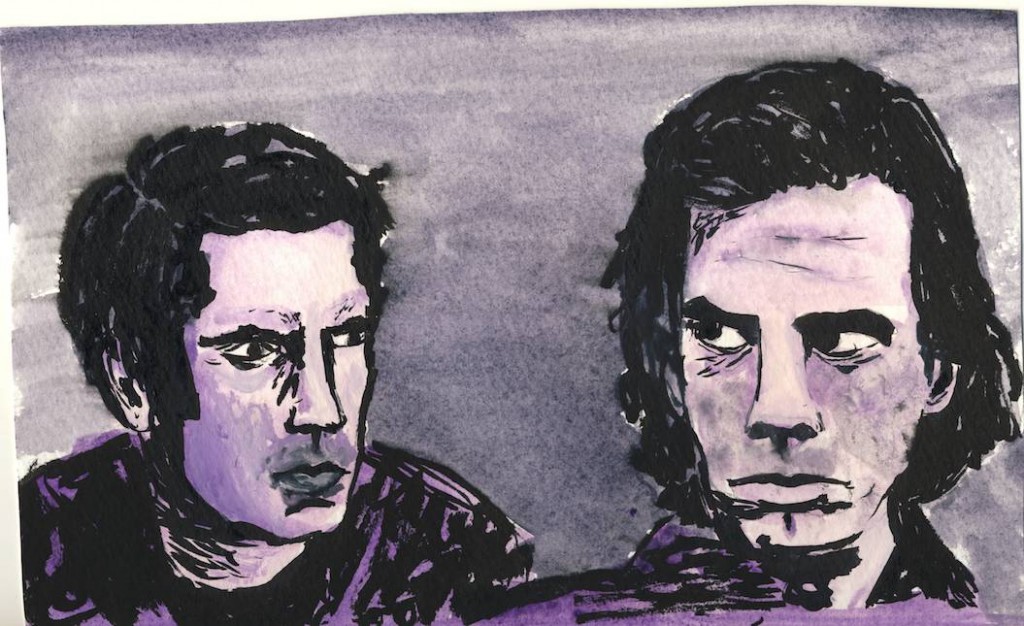 Trent Reznor and Nick Cave brood it out. Painting by Riayn Grey.

As I become more and more acquainted with the discography of the punk-opera god Nick Cave, I couldn’t help an internal dispute forming between him and my reigning rock idol, frontman of Nine Inch Nails, Trent Reznor.

While dwelling has made the comparison seem absurd, they do occupy the same or adjacent space in my mind, so contrasting them is inevitable.
In so doing, I have fleshed out for myself what it is that I love about each of them individually.

They are both pioneering forces in their respective genres, their focus both revolves around their angsty perversion of love and faith, but this is where their angles diverge.

Simply put, I experience Cave while feeling Reznor. I don’t believe a word Cave says while relishing in his lyricism nonetheless; it’s apparent he loves hearing his own voice as much as we do. His perspective on sex and gods is a romantic one, lacking resonance, but gaining beauty.

NIN on the other hand evokes primal emotion that we can relate to. While both artists commit their voice wholeheartedly, Cave allows absurdity in while Reznor maintains a hopeless longing most of us grew out of soon after high school.

The amusing inversion comes with what surrounds the lyrics and vocals. With Reznor it is the emotion that is raw, but a soundscape that is meticulous. In my musical coming of age it is through NIN that I learned how to hear music, not as a collaboration of varied and typical instruments, but solely as sound and layers, every sustained note being deliberate and placed rather than just a continuation of a riff or beat. Every sound is painstakingly arranged to contribute to the whole, down to the simplest bleep, blip or occasional can of broken glass being shaken.

With Cave, order, or even structured chaos, is abandoned for something utterly raw, as if you’re hearing the song emerging as consequence of his ponderous growl. Experiencing his sonic progression over the decades is joyful, as the pup on From Her to Eternity grows into the aged beast on Dig Lazarus Dig, it is unmistakably the same animal, merely grown and allowed more lavishness.

Now here is what made this article worth writing: a quandary. I thought in depth about how cathartic NIN has been throughout all my darker periods, and so I began to wonder…

Do I take solace in the shared feelings expressed in songs like ‘Something I Can Never Have’ and ‘Somewhat Damaged,’ or did hearing them impress upon and then validate my perception of my own feelings regarding love or society or religion?

As Disney films raised us with false conceptions of romance and gender roles, did goth and emo music distort the reality of those that related to it? Part of the answer obviously lies in the question, the music wouldn’t have resonated if not for something intrinsic in me that had me seek it out. However, if these notions of wistful longing and brooding masochism hadn’t been given credence from this peculiar external influence, would they be so prevalent in me, in us, today?

In the comments below I would like to invite you, dear reader, to talk about the artists that might have gotten you through high school, what albums/songs/lyrics in particular resonated with you and how if at all they might feasibly affect how you perceive such subjects now, as an adult.

I could always ramble on more but I’d like to engage more hands on with all of you.

Luke Miller is a writer, geologist, neuroscientist, humanist, stoic and audiophile who just wants to make the world less tolerant. He’s terribly biased but holds himself to journalistic standards of honesty and it certainly helps that he’s always right.@kryslam

More ‘deep’ thoughts from De’Lunula:
Bubbles.
Do Banks Steal from You?
Eulogy For Your Internet Fame
LinkedIn is as Jealous and Insecure as my Ex-Girlfriend.
Complicated Books Summarized in Haiku Form