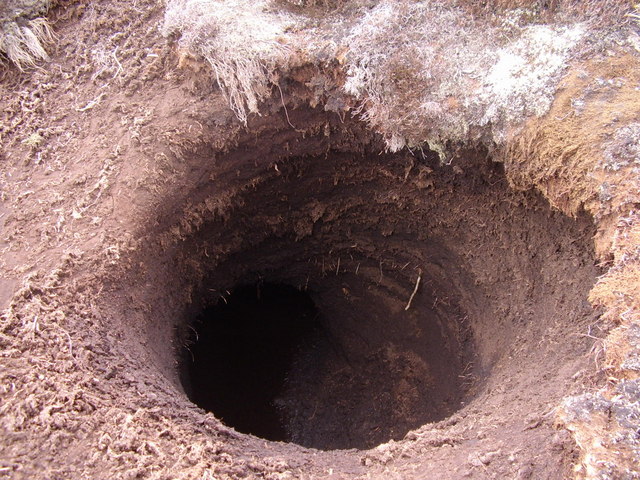 For this episode of the WikiHole, we decided to do hole. It kind of blew our minds and we were unable to crawl back from the hole for literally hours. Meals were skipped, and our unshaven faces scared children when we emerged. Let’s go down the hole together.

First of all, Wikipedia defines a hole as an opening. OK, so far, so good. It differs from a gap, a void or an orifice, but they’re all the same thing, pretty much. There are also many kinds of holes that I did not know about. I learned what a ‘murder hole‘ is and how it is different from a ‘murder-hole‘ or drowning-pit.) One was for pouring quick lime on people’s heads, the other was used specifically for executing females under Scottish feudal laws. Now you know!

Of course, I’d heard of black holes, buttholes, whiteholes, wormholes and portholes, but never heard of Høle, Norway (which was separated from Strand as Høgsfjord formannskapsdistrikt in 1842 … good to know); Hole in the Day, a a chief of the Chippewa people (no mention of how he got that awesome name), and Hole theory, or the Dirac sea, a theoretical model of the vacuum as an infinite sea of particles with negative energy.

Wait, what the fuck is negative energy?

I still don’t know. I read the Wiki page over and over, but it still didn’t make any more sense. But it did lead me to Hawking radiation, which led me to Black-body radiation which led me to black body which led me to Vantablack, the blackest substance known, absorbing ‘a maximum of 99.965% of radiation in the visible spectrum. It is composed of a forest of vertical tubes which are “grown”. When light strikes vantablack, instead of bouncing off, it becomes trapped and is continually deflected between the tubes before eventually becoming heat.’

The idea that something could be so black kind of made my brain hurt. And I stared into that hole, for a long, long time. And perhaps it stared back at me. I’m not exactly sure. I am having trouble seeing now. I think I need to stay away from the Wikihole for a while…

Troy Farah is an avid wikipedia fan from Phoenix. His journalism stuff has appeared in VICE, LA Weekly and others. His website is troyfarah.com and please don’t stalk him on twitter right here he really hates that.

Read more tomes from the WikiHole:
WTF Is A Hell Pig?
Time to Pound Pavement, Friends
Don’t Let The Penis-Faced Saiga Antelope Die From The Sniffles
Get Traumatized Learning About Traumatic Insemination!