Why Is Kiev A Nightmare Right Now?

After months, “good hearted” protesting in Kiev have finally broken down as more fire and death cause the nation’s capitol to resemble an armed revolutionary power struggle. Following several raids across the country, opposition forces have managed to steal over 1,500 guns and plenty of ammunition and explosives as well. But how did it get to the point where we have priests attempting to keep the peace between security forces and protesters as they exchange rocks and Molotov cocktails?

There’s a lot going on amid this, as just yesterday, President Viktor F. Yanukovich announced (via his website) that his administration had reached an agreement with members from various groups of protesters. This is after Kiev has been wrecked by two straight nights of brutal conflict between groups occupying the city square, a scrimmage that left over 25 dead and hundreds injured on both sides. Monday night, police forces moved to evict thousands from Kiev’s Independence Square were met with fierce opposition as fires broke out through the camp, destroying the park and encampments.

For months, demonstrators have been rallying against their governments’ refusal to hear grievances over the delinquent state of the nation’s economy, unaddressed education and social support issues. Now the city has been turned upside down after weeks of riots have slowly been escalating into a war for the streets. To really understand what’s going on, we must break through various outlets of disinformation and look to history’s example.

Kiev, the capital of Ukraine, borders Russia, Poland and Slovakia, among others. Ukraine has long been suffering from economic hardships, political corruption and social malcontent, so while Eastern Europe hasn’t always been the most chill geopolitical region, what’s been going on recently has all the remnants of an old Cold War bullshit power struggle. 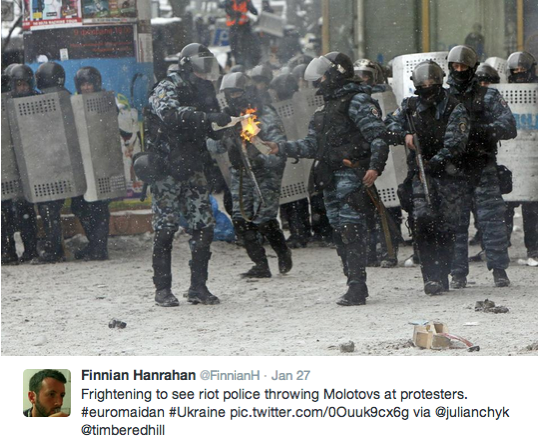 So when everyone’s favorite corrupt HGH junkie, Russian president Vladimir Putin, offered his neighbor support through gas discounts and an economic stimulus package, it might have seemed like a blessing. Ukraine, once one of Moscow’s closest allies, provided Mother Russia with vital resources and military support as well as a pretty large buffer from more West-aligned states.

Putin’s offer would be good and neighborly, but large sections of the Ukraine population have taken issue with reliance on a nation that many would prefer to distance themselves from. People from labor unions and student rights groups are especially upset with Ukrainian President Viktor Yanukovych’s decision to not pursue a deal for closer integration with the European Union.

The deal would have worked to fast track Ukraine’s entrance into the EU while providing much needed assistance and opportunity for Ukrainians. Working closer with the EU has been strongly supported by youth, unions and others that are hoping for a brighter economic future if they move further away from Russia.

What really seems to be pissing people off is President Viktor and his buddy-buddy attitude towards old, oppressive Soviet tactics. Despite months of endless protesting, nothing has really changed. To many, the situation has only gotten worse. The underlying issues over the economy and corruption are still there, and now, with Yanukovych imposing strict bans on basic freedoms, all Hell has broken loose.

To make this even more ominous, on January 21st thousands in Kiev’s center received a very Orwellian text message: ”Dear subscriber, you are registered as a participant in a mass disturbance.” 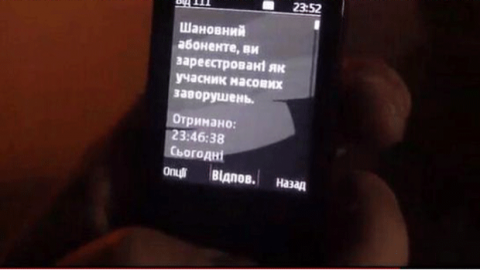 Whatever the aim of the text, it didn’t do much but fan the flames of protest. The following night, tens of thousands took to the street, turning the city into a fiery war zone. Those who weren’t confronting police on the streets stormed nearby government buildings, taking control, organizing groups and disturbances from inside warm Soviet-era buildings.

The text message was one thing, but earlier on January 16th Ukraine’s parliament rushed through a set of anti-protesting measures that worked to block freedom of speech and assembly. These restrictions that have to come to be known as the “dictator laws” were met by an international outcry from the UN, US and human rights groups around the world. It was clear that Yanukovich’s administration was looking to clamp down on dissonance before it continued to expand before the city’s capitol.

Since the crackdowns began, Kiev has continued its slide into it’s own version of an eerie, snow-covered warzone. For weeks, peaceful protesters and cleanup crews have take to the streets at first light. Unions and political groups have been marching, holding banners and signs, airing their grievances and demanding fair representation. 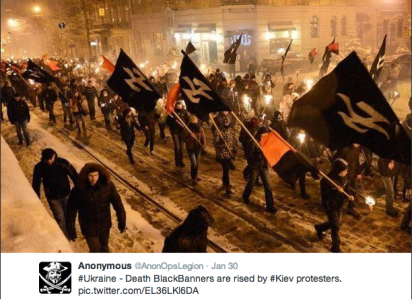 While marches during the daytime are “relatively” uneventful, as the sun sets, masked demonstrators make their way through the city streets with one thing on their mind: bringing Kiev to its knees.

Protesters work in roughly organized teams, trucking in old tires, loading glass bottles with gasoline for Molotov cocktails and setting up barricades. Just as special operation police move into formation about the square, protesters set fire to makeshift roadblocks of tires while releasing storms of Molotov cocktails, glass and debris.

After two months of public demonstrations, the increasing violence between police coupled with the instability in the capitol has many around the nation are looking for an end to the violence. Up until the President’s announcement today, very little actual progress has been made while the social, economic and political issues have all been brought to the forefront of revolution. Ukraine finds itself internally divided on so many issues while being caught between its old alliances, internal corruption, outside influence and hope for a better, progressive future.

Stay tuned in 2014, because this situation shows little sign of changing. Hopefully, as spring thaws through the snow, protesting for progress will become more bearable.

Tags: delunula, kiev, ukraine revolution
Previous postThere's No Such Thing As Priceless Artifacts, or, Why Lazlo Toth Might Not Be The Anti-Christ Next postWe Have Aerial Footage Of The Phoenix Welding Explosion Aftermath