Absurd Gore, Unflattering Nudity, and Lots of Grease in ‘The Greasy Strangler’ 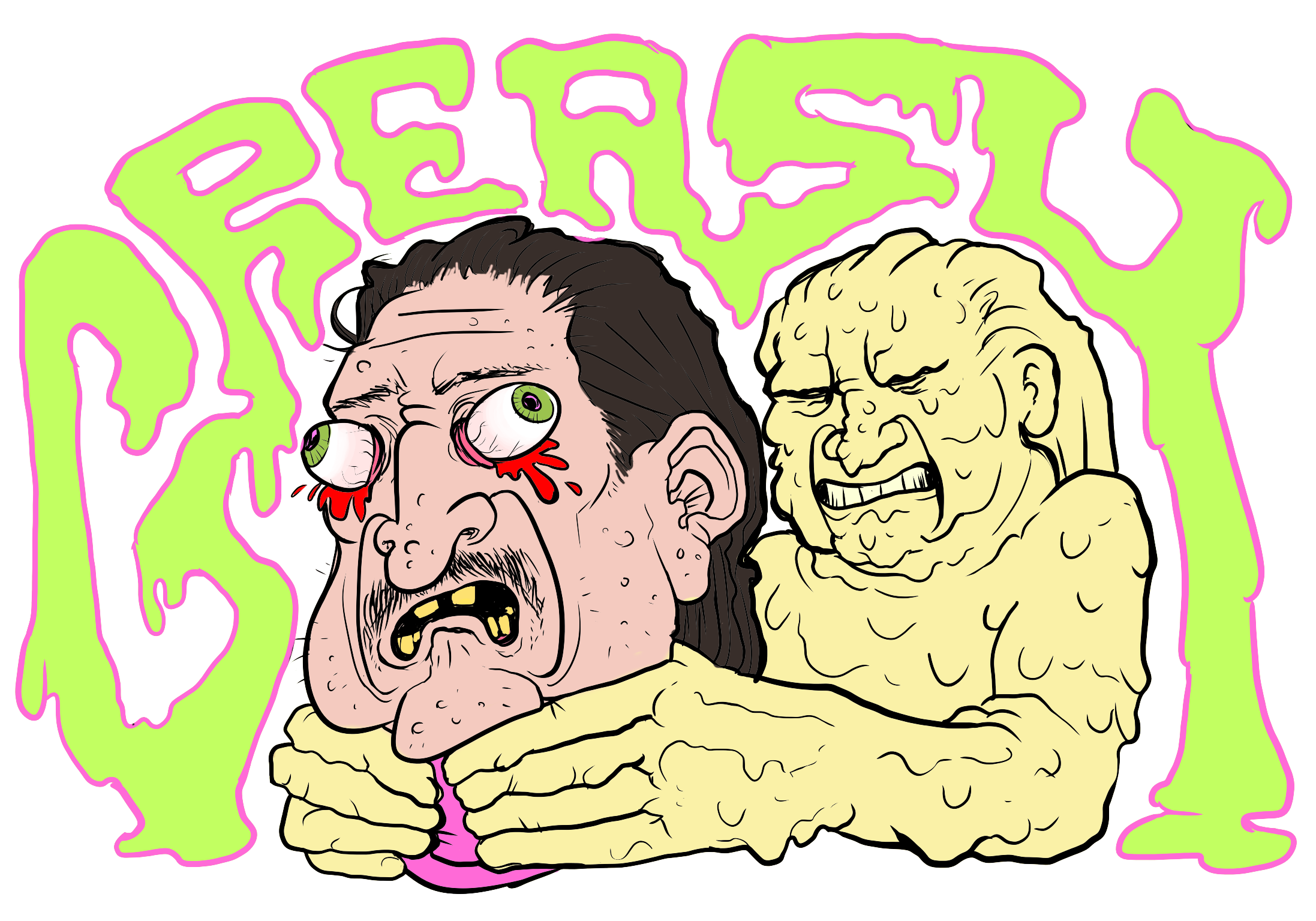 I don’t think any words could describe The Greasy Strangler’s target audience other than “niche.” This little known film is directed by Jim Hosking whose IMDb page is either intended to be depressingly beautiful or sadly defeating. He doesn’t even have his birthdate listed and his bio consists of the lonely words “Contribute to IMDb. Add a bio, trivia, and more.” With a little blue text underneath begging someone– anyone!– to tell us just who the hell this guy is.

This theme is echoed on the pages for his cast members. Although, looking at his resume, Hosking has nothing that any standard person would recognize, with only a few shorts, some of them fairly well received, and some cult films like Renegades. Of his three feature length films, only one of them has a score higher than a five (sadly, it’s not The Greasy Strangler). The wonderful thing about being an unknown indie director in the movie industry though, is that, with the right financial backing, you have limitless potential to achieve the true creative vision of your film; to reach for the wonderful nucleus of the auteur; to satisfy your bulbous, sticky drive to create something unique and beautiful and to leave your mark on history. Turns out, Hosking’s visions are fucking disgusting.

From the word go, you will know exactly what you’re in for during the hour and thirty-minute run time: absurd gore, unflattering nudity, and lots and lots of grease. All you need to know is that there is a serial killer on the loose who bathes himself in grease and strangles people (shocker, right?). This is a film that knows exactly what it wants to be: ridiculous. It succeeds on every level.

The story is centered around Big Ronnie, played by Michael St. Michaels, and Brayden, who I swore was Eric Wareheim but is actually played by Sky Elobar. Together they run a father and son disco tour where Big Ronnie spouts blatant lies about important disco “landmarks” to a group of about five people. The opening shot is of them both in their underwear shamelessly flaunting their magnificent bulges. It’s quickly established that not just Big Ronnie, but the entire town we are cemented in has a eerie obsession with disco music. If you hadn’t guessed, the theme of this film is grease. So naturally, there are lots of close up shots of foods being slathered in jars of pig lard, dunked in bacon grease, and slowly eaten as even more grease squirts in all directions. I honestly think that the majority of the budget went into viscous substances.

Reading back the last few paragraphs, I feel like my tone has been a bit too derogatory and angry so let me be frank: I adore this movie. Every bit of it. The cheesy acting, the awful gore reminiscent of the head inflation scene from the original Total Recall, the soundtrack, the set design, all of it. The Greasy Strangler is an absolute uproar. This was another movie I experienced at the Phoenix Film Festival and was coincidentally also the only one I gleaned any sense of entertainment from. Unfortunately, this is where the niche parallel from earlier comes into play. This is most certainly not a film for everyone. The best kind of audience is one that’s incredibly drunk, incredibly high, or incredibly crossfaded; one that’s immature and ready to laugh at ridiculous prosthetic cocks. If you’re the kind of person that can’t laugh at Birdemic, this isn’t the film for you. It’s a gross out film; not to be watched with parents.

So why would I say that the Greasy Strangler gets a recommendation but something like Coming Through The Rye does not? Both are cringey, both have terrible writing, both make little sense in the logic department. The answer is intention. The Greasy Strangler was written with being awkward and weird in mind. It never wants to take itself seriously. When you design a movie from the ground up to be awkward, it shows how skilled the creators are. Everything was done intentionally to tie into each other and draw a laugh. The characters are illogical, but I’m not sure what you wanted from a seventy-year-old and his son who dress like pole dancers. The actors lines were delivered intentionally poorly to highlight how big of dorks they are. Coming Through The Rye, however, does want to be taken seriously. So when a line grates against the ears, it is apparent that it was a product of a director who doesn’t know what the fuck he’s doing. The Greasy Strangler almost plays like a satire of other, more shitty horror films so it is no surprise that some people don’t get the joke. Afterall, there were plenty of people who thought that Jonathan Swift actually wanted people to eat their babies.

One of the major criticisms I’ve come across for The Greasy Strangler is that “it was simply too much,” made by folks who snottily sneer at anything that isn’t a pretentious avant garde college film. The problem with this criticism is that it’s a bit like frowning on Reddit because you clicked a link titled “Fat Hairy Dude Chews His Own Dick Off.” I’m not sure what these people were expecting from a movie called The Greasy Strangler.

The IMDb description for the movie reads “Ronnie runs a Disco walking tour with his son, Brayden. When a sexy woman takes the tour, it begins a competition between father and son for her love. It also signals the arrival of an oily strangler who stalks the streets at night.” Scrolling through the cast, the only female is Elizabeth De Razzo who looks like the girl from Precious got ahold of a make-up kit (no offense to her, she was wonderful). There is no way they couldn’t have known that there’d be a fat naked black chick in the film. What I’m saying is, these people who think the movie is “too much,” didn’t fully comprehend what kind of film they were getting themselves into. This wasn’t intended to be a masterpiece (though I’m a bit inclined to call it one) but I can understand that the humor presented isn’t everyone’s can of tuna.

If there was one major criticism that I feel would be very well justified, I’d say that it relies too much on shock humor. Which is also why I don’t want to go in depth with the plot so to not ruin it for any future patrons. It intends to either make you laugh, or vomit (both?) and, like South Park, I can’t help but feel like the humor will be somewhat lost upon multiple viewings. Becoming desensitized is the bane of this kind of humor. Still, it’s potent and powerful while it lasts. God knows I still want to wear a bright pink turtle-neck sweater (and can someone please get me one of those pink beanies that say “Greasy” on them?) and I can’t get that stupid soundtrack out of my head.

The Greasy Strangler is getting a full release on October 7th and I urge anyone who thinks this movie sounds funny, please go see it. This is a film that deserves your money. I really want to see pairs of people calling each other Bullshit Artists and wearing pink turtlenecks as they walk down the street. This has the potential to have an amazing cult following and I really don’t want people to miss out. The crowd I was in at PFF was small but everyone in it had a good time. I remember one guy actually fell out of his chair during one of the sex scenes because he was laughing so hard. There were about thirty people there to share this experience with, and I want more. I want there to be late night showings like Rocky Horror. I want there to be a “Greasy” tag on Tinder to let others know that you’re one of the initiated. Jim Hosking deserves your attention on this piece, let’s not disappoint him.