“Chaos 17” Had Method To Its Madness

I hear a couple behind me yelp, then break out into a laugh. They’re looking up at the ceiling in Legend City Studios, grinning sheepishly. I tilt my head up to see what they’re looking at and see huge luminous projections of black & white spiders crawling overhead. They look like the ghosts of the tarantula from “Persona” slowly skittering over our heads. I’ve never been afraid of spiders, but after looking at Lauren Strohacker & Kendra Sollers’ “Animal Land” projection for a minute or two I decided to go look at something else, anything else, that didn’t make me feel like a fat fly sitting on a silk strand. 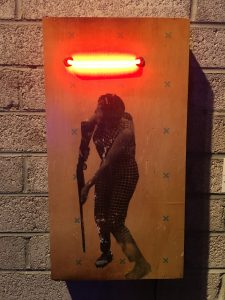 It’s a few minutes after 6 on the opening night of “Chaos Theory 17” and there is already a decent amount of people circulating through the building. Soft inoffensive indie music wafts through the room, the kind of music that belongs on a playlist called “My Morning Bon Misty Fox”. There must be at least half a dozen photographers with REAL cameras (not phones!) documenting the event. I wonder what you call a group of photographers: A shutter of photographers? A click? A flash? A development? I went to the opening alone, so I have a lot of time to ponder these dumb tangents without any conversation to save me from them. Sometimes it can be hard escaping the gravitational pull of one’s own navel. 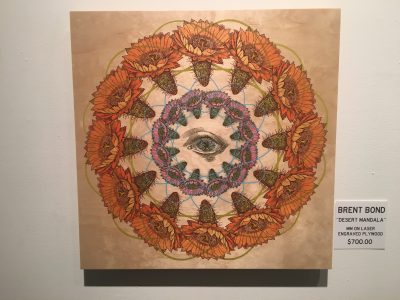 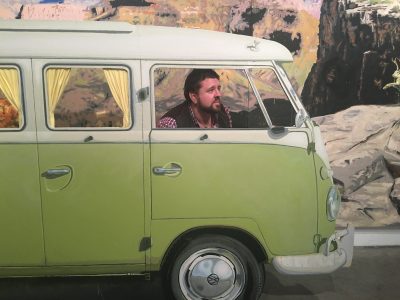 Randy Slack “Myrtle” (with the author in the driver’s seat)

In a nearby room there’s a trio of neon pieces by Daniel Funkhouser, Casebeer, and Lisa Von Hoffner. They end up being three of the funnest pieces at the show; Funkhouser’s piece being a particular standout, as it kept on cycling through different colors and lighting up different arrangements of stars. 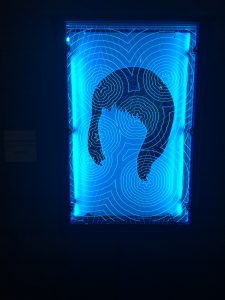 Most of the artworks on display are paintings, but there are a few sculptures scattered across the room. To be honest: Sculpture doesn’t really do anything for me. While I can admire the labor and skill required to pull them off, I’ve only seen a few sculpture pieces that have actually moved me. Most of the sculpted works on view didn’t make much of an impression, with the exception of Tara Logsdon/Die Bearmy’s towering “bearrier”, which presented a wall of street signs touting spiritual messages and bear shapes. 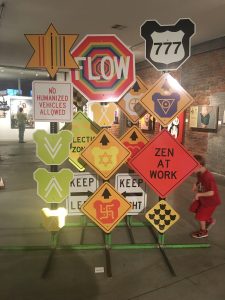 A little boy kept running back and forth through the thicket of signage, and it was nice to see that there was no one trying to shoo or dissuade him from monkeying around with the art. After all, if art doesn’t inspire you to play with it on some level, either physically or mentally, then what’s the fucking point? 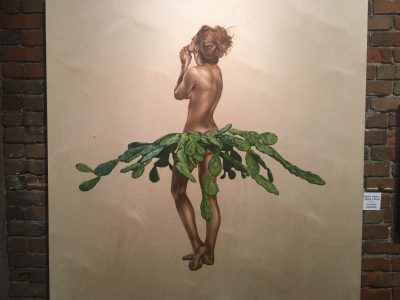 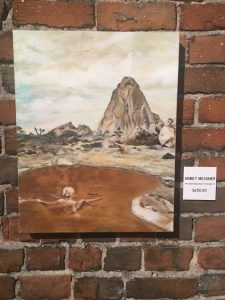 Quite a few of the pictures on display at “Chaos Theory 17” play with Southwestern iconography. And while normally paintings of cacti and desert ‘scapes leave me feeling cold, I warmed up to the desert art on the walls. Pieces like Brent Bond’s “Desert Mandala”, Shauna Thibault’s “Prickly Pear” (whose cactus skirt image became one of my favorite pieces at the show) and Abbey Messmer’s “The Inevitable Waits Patiently” caught my eye. Messmer’s piece had an eerie power: Was the women in the painting submerged in muddy water, or trapped in quicksand? It made me wonder if the “inevitable” in the title was a foreboding of our own inevitable dry futures, when our city will be crippled by mega-droughts and leave us wishing we were lucky enough to have a brown pond in the desert to soak our dry bones in. Across the room James Angel’s “Windows 95” hung, looking like a white window offering a view into a vaporwave living room. Mykil Zep’s “Black Acid” hovered nearby, waiting for a stoner metal band to adopt it as the cover art for their next album. Yuko Yabuki’s “Evolution & Revolution” featured a regal cat that looked like it could be one of the 72 demons of the Goetia (and featured a price tag that Aleister Crowley would love: $777, the second time that occult number appeared in the show). And Luster Kaboom’s untitled pen drawing of a cartoony cityscape blew my mind with its mind-boggling level of detail. 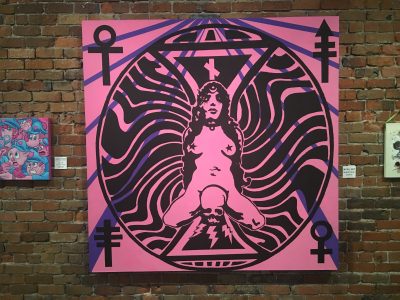 What struck me most about the show as I circled around and around the room was the sheer variety on display in terms of mediums and imagery. From a wall covered in small marble skulls to a globe made out of map puzzle pieces, there were all sorts of delightful and unexpected images on hand. And what was really impressive is that it all seemed to cohere. There wasn’t a single piece that stood out as being wildly inappropriate or stuck out like the proverbial sore thumb. For a show with chaos in its name, it seemed anything but. 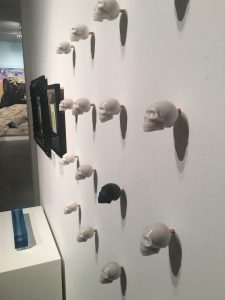 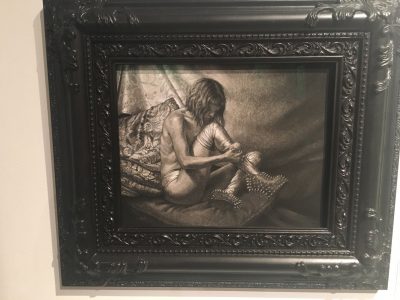 On the way out I took another look at a piece near the entrance that really got to me: Richard Kimbrough’s “She Flew Away With My Heart”. It was a painting of a wailing man with a glass sculpture of a butterfly bursting out of his chest. It was a little cheesy, yet heartfelt. I have no doubt that it’ll be a piece that will linger in my memory for a long time. Having spent most of the last year trying to get over a broken heart, I know that feeling of something beautiful flying out of your body all too well. Richard Kimbrough “She Flew Away With My Heart”