Is Majoring In Journalism A Waste Of Time? 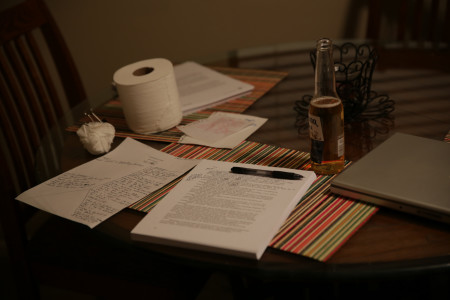 Once, I wrote this piece for LitReactor on how learning and practicing journalism can improve your fiction. Phil S. asked me to clarify a few things. I decided to answer his question and share it with you if you’re considering majoring in journalism for any reason.

I don’t know what to declare for my major. I want to be a novelist when I grow up (and by that I mean when I’m 40 or so, probably later), and I’m not sure whether or not journalism is my best route. I want something that’s going to force me to hone my skills, but I also want time to work on fiction, because I’m not 100% sure that those skills transfer over to fiction.

And I know this might seem like a stupid question because you said, “if I could go back I’d probably learn something more financially stable,” but have you considered that your degree in journalism forced you to improve your writing skills? And do you think those skills have improved your fiction?

Thanks for reaching out. Keep in mind that I’m just one person, so my experience might be a bit limited. My journalism degree was the best thing that ever happened to my writing career. Without it, I wouldn’t be half the writer I am today. I learned so much about structure, story, etc, etc.

However, if I were to go back, I would not major in journalism, but would take a few core journalism classes. My major would be something else. See, one of the things I learned about university is it’s a complete waste of time, but it’s a fun, worthwhile waste all the same. You don’t graduate and suddenly know very much about the real world (bills, jobs, etc… or at least I didn’t). Instead, I was left with 30,000 in debt and had to figure the rest out on my own.

So I wish I had taken as much time as possible to get through school. I figured the most ‘adult’ thing to do would be finish in four years, like you’re supposed to do, but really, the average student graduates in five years and if it had taken me 10 years, I would be much happier.

The best part about this strategy is you can take whatever classes you want, really. Per semester: take one or two journalism classes (these will teach you how to write, like you want), then figure out how to freelance. Once you can freelance, you can build a portfolio (far more important than a degree) and start a journalism career on your own.

Whatever other classes you take, especially whatever is related to your major, is up to you. I say choose something that makes money (in my view, sciences are best — I would major in chemistry, geology, or something, but again, do whatever interests you.) The reason I say to choose something that makes money is because freelancing will make you jack shit at first. You will be poor and stressed and overworked if you go for journalism alone and those qualities will make it very hard to concentrate on writing.

Here’s how it worked for me: While taking journalism classes, I started at the school paper. I soon realized this would not be enough of a resume boost to get me any job in journalism (I was absolutely correct — most places only hire editors full-time. Writers are a dime a dozen and either get freelance gigs or part time work. It’s very rare to get a full-time gig as a writer without a portfolio). So I began at a weekly paper in my college town, on top of school, a part time job, and the school paper. The weekly paper, while nice, paid me very little. All weeklies pay very little. Enough for beer or weed, but definitely not enough for rent.

So for the next two years after I graduated, I was working shitty, stupid jobs totally unrelated to journalism or anything else I wanted to be doing while I built a portfolio, which meant I was pretty much always working. But soon enough (years, really), my clippings were strong enough to get me a job at a better weekly, and then a major online magazine from there. Right now, I make enough (barely) to live as a freelancer.

What could have happened instead was I worked at a nice sciencey job, freelanced on the side as a hobby and then built that portfolio much easier. I would have gotten to where I am today, perhaps further, four years after graduation, without nearly as much stress.

Again, that might not work for everyone interested in journalism. This is just my experience. The most important piece of advice I would give to you is to learn as much as you can, and try to learn things that you can apply in ways so that you work for yourself. I hope that answers your question — sorry for the novel, I’m a bit drunk. Good luck with everything.

Tags: delunula, journalism degree, what should i major in, why so sad
Previous postDARE Programs Across The Country Are Losing School Funding Next postWTF Is A 'Hell Pig?' --- WikiHole