DARE Programs Across The Country Are Losing School Funding 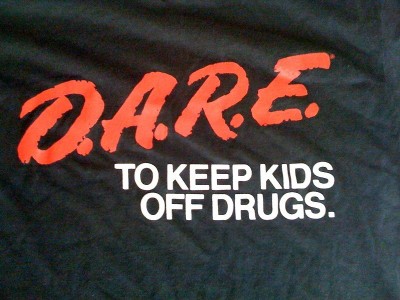 If you attended high school within the last 31 years, you might have been enrolled in the Drug Abuse Resistance Education program, better known as DARE. It’s where a police officer comes to your school and instills fear into your naïve, junior high school heart, about every possible danger about drugs. It’s where you’ll hear things such as ‘pot kills brain cells’ and ‘only losers do drugs’ and ‘this your brain on drugs.’

Thankfully, these programs are slowly becoming passé as more and more schools across the nation find that there isn’t room in their budget (after everything from music to art to computer science are being defunded as well) for DARE. Ohio is down from 600 DARE officers to just 220 and that number continues to drop, while a 2012 study pulled data from 32 states across the country, and found that 60% of school districts had eliminated the DARE program in a trend that has grown since the mid-2000s, according to Toke of the Town.

Sure, drugs can be dangerous. Even deadly. But when you consider that programs like DARE have little to no impact – and may in fact increase drug abuse, not prevent it – you have to wonder what value DARE holds.

After researching a generation’s worth of data on the program, Ohio State University professor Rick Petosa concluded, “If you look at it strictly from its impact on drug use, it has little to no drug impact.”

Why don’t these programs work? And aren’t they necessary to ensure that children don’t grow up to be junkies? Well, first of all, they don’t work because they rely on fear over facts. Fact number one is that kids are gonna try marijuana, whether its legal or not, whether they’re told the truth or not. And the truth is marijuana is pretty much harmless compared to most other drugs, especially legal drugs like cigarettes and alcohol.

Nearly 40 percent of all high school seniors admit to having smoked marijuana in the past year, according to the recent 2011 Monitoring the Future Survey. That percentage that has held relatively stable since the study’s inception over 35 years ago.

It seems it’s far better to be honest and upfront about drugs, rather than treating it like a forbidden fruit or a bogey man that will turn your brain to mush. As Kristen Gwynne, writing for AlterNet says, “Give young people accurate information, and they will use it to make better decisions that result in less harm to themselves, because teens, like everybody else, do not actually want to get hurt or become addicts.”

Plus, it’s not like schools are cutting drug education entirely. They’re still teaching kids what drugs are and what they do to you, but Ohio and Connecticut are preferring to pass on this knowledge during health class, no police officer needed. Probably more importantly, kids are using the extra time to learn stuff like math, science, literature and history – you know, stuff that they can use to get a job in the future. One could even argue that learning more about how to live in fear than science would turn teens brains to mush much more than drugs.