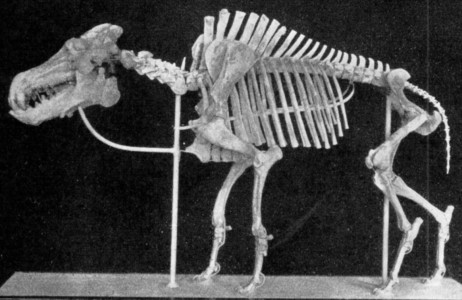 While doing some research on genetic engineering, I stumbled upon a page labeled Hell Pigs. That name just grabs you, so naturally, I started reading about the Entelodonts, or terminator pigs, a family of extinct mammals. I thought the name was a joke. It isn’t.

These giant assholes not only look terrifying, they were mean motherfuckers. But they’re actually more closely related (according to the theory of evolution) to whales and hippos than to pigs. But more importantly, these orange-sized monsters were bulky, 2.1 m (6.9 ft) tall at the shoulder, and had huge jaws. 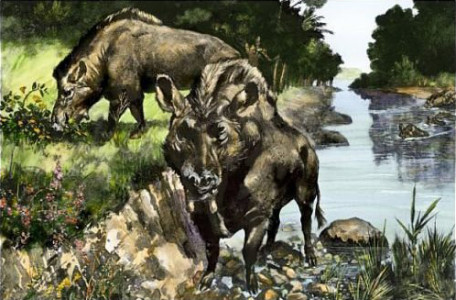 Hell pigs were found in the forests and plains of North America, Europe, and Asia from the late Eocene to early Miocene epochs (37.2—16.3 million years ago), so they’re fucking long dead (phew). What I found most interesting is probably their diet.

The first is Eporeodon a cow-sized ‘oreodont.’ I thought oreodonts were those candy corn-flavored Oreos, but they’re actually gigantic “ruminating hogs.” The other common snack for Hell Pigs were the sheep-sized cameloid Poebrotherium wilsoni. I’d never heard of a cameloid before (not a new brand of cigarettes, it turns out) but they are weird looking freaks. 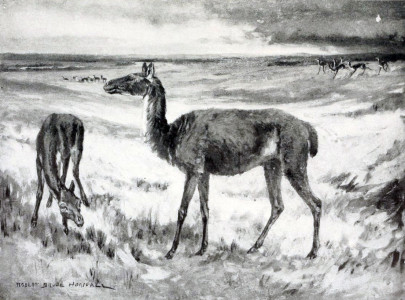 And that’s what Hell Pigs liked to murder and eat. Boy, am I glad for things like extinction.

Anyway, I thought that was super interesting, so I thought I’d share.

Read more tomes from the WikiHole:
How to prevent misunderstanding while communicating when stressed[edit]
Don’t Let The Penis-Faced Saiga Antelope Die From The Sniffles
Get Traumatized Learning About Traumatic Insemination!

Tags: delunula, hell pigs, swine from hades, wikihole, wikipedia
Previous postIs Majoring In Journalism A Waste Of Time? Next postGo To This. Cream Yourself. Tell No One, Ever.