Memes Are Stupid — Do Banks Steal From You? 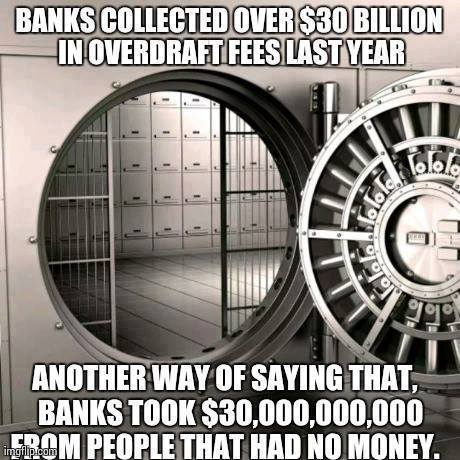 Memes are idiotic in general, but the worst memes are vaguely political or scientific in some manner. Because these memes reduce a complex topic into a pithy, two-sentence agenda and also rarely provide sources for the claims being made, they spread disinformation and propaganda, despite being slightly accurate or good-intentioned.

Above is a pretty good example. This meme suggests that fining someone for trying to make a transaction with insufficient funds (i.e. using money you don’t have) is theft by the banks. It’s kind of a weird idea — if banks didn’t have overdraft fees, wouldn’t people just be able to charge as much as they wanted with no consequence? Where is the logic in that? See how you can’t summarize such a complex argument so neatly?

The meme also makes an outrageous claim — $30 billion dollars is a lot of money. Yet, there is no source for this claim. It’s best to always be suspicious of large, seemingly random figures. And let’s be honest, the majority of us in our busy, media-filled lives are not going to look that figure up. Instead, we’ll instantly choose to agree or disagree with it before moving on, a mental phenomenon called ‘confirmation bias.’

But it turns out the meme is actually right.

According to Forbes, in 2013, the amount incurred by banks is $31.9 billion dollars, actually a bit more than $30 billion. The article goes even further, giving hard evidence for ways the banks have gone out of their way to screw over their customers. I quote:

Yeah, fuck banks. But a meme turns a serious discussion into something so derivative, it actually makes a terrible form of argument. You can’t tweet something and hope to be taken seriously, even when you’re right. Instead, memes foster confirmation bias and help us to see a less broad view of the world.

More deep thoughts from De’Lunula:
Eulogy For Your Internet Fame
LinkedIn is as Jealous and Insecure as my Ex-Girlfriend.
Complicated Books Summarized in Haiku Form