On Blast: Maestro Ilaiyaraaja and the Electronic Pop Sound of Kollywood 1977-1983 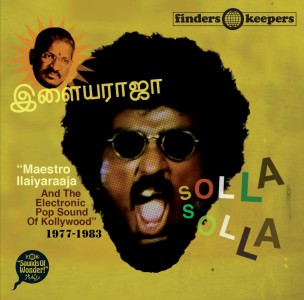 As this is my first column, I figured it’d be a good idea to write a short introduction about who I am, what I like, and what this is. The only problem is that I often have no idea how much context to give when it comes to introductions. I either feel like a short chump or a dreaded oversharer. So.

As far as interests go, mine revolve primarily around music and geography. I like the relationship between the two, and I love tracing back musical lineages to find where all the good stuff began. I have a knack for finding weird foreign stuff, particularly compilation albums, and I have a passion for sharing it. That’s what I’ll be doing here. My area of “expertise” falls somewhere along the rock ‘n roll – surf – garage – blues spectrum, but that doesn’t mean I can’t guarantee that I won’t throw in some Tuvan throat singing or folk recordings from Malawi.

If I had discovered Bollywood at a younger age, I feel as if my life would’ve gone down a completely different path. Sure, yeah, I’m cool now, but imagine how much cooler I would be if the first album I bought with my own money was something by Ilaiyaraaja, instead of The Bridge by Ace of Base.

The band portrayed in that scene, Ted Lyons & His Cubs, can also be seen in “Janwar,” a film released the same year as “Gumnaam” that’s a bit more jolly, considering it doesn’t focus on the, y’know, murder and attempted rape of its main characters. But “Janwar” does have something incredibly special — another Mohammed Rafi song that is some Uncanny Valley version of The Beatles’ “I Wanna Hold Your Hand.” The lyrics don’t quite translate the same, but “Look, no one knows yet / My heart loves you” over and over is almost as endearing as the original.

Anyway, on one of my searches for some rad Bollywood that wasn’t disco re-hash or the typical “girl lead supported by girl group sings sassy pop to boy lead supported by boy group,” I became so exasperated that I just Googled, “Bollywood rock ‘n roll,” because that’s exactly what I wanted. And man, did Google deliver. I mean, it literally gave me a video titled, “Bollywood rock ‘n roll.”

The friendly people in the YouTube comments led me to the knowledge that this song, “Solla Solla,” was composed by the great Maestro Ilaiyaraaja — a name I recognized as the first Indian person to compose a full symphony (that was later performed by the Royal Philharmonic Orchestra in London, no less). Using this newfound information, I uncovered Solla Solla: Maestro Ilaiyaraaja and the Electronic Pop Sound of Kollywood 1977-1983, which very well may be the best album Finders Keepers has ever released.

This was the first album to convince me that not all Bollywood (in this case, Kollywood — essentially the same cinematic and musical styles as Bollywood, but from the Indian state of Tamil Nadu, just north of Sri Lanka) is about campy novelty or blatant pop-music ripoffs. I haven’t listened to this album >20 times because I find it amusing or weird. I’ve listened to it so many times because it’s really fucking good; it’s creative and fun and captivating and, in terms of lifting your spirits, this album has done more for me when it comes to pulling me out of the dregs of daily monotony than almost any other. It’s been over a year, and I have yet to tire of it.

Listen to these bad boys and tell me you don’t feel the same:

You can pick up this beauty of a comp from Finders Keepers, one of the finest archival labels active today. And come back soon, because the next album on my list focuses on 1960s-1980s pop music from Thailand that will make you swoon.