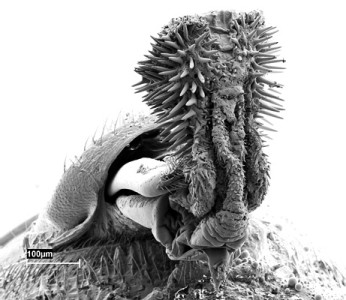 The microscopic penis of a tiny demon.

Hey readers, remember how there was a year or two back there when bedbugs sprang up again and became a serious threat to humanity? Yeah, and everyone flipped their lids and began freaking, because, you know, we were being invaded by grody little parasitic fiends. So the main reasons for hating them were the disgusting ones, right? Like the fact that they drink your blood, and fuck up mattresses and the like, leaving crumply little piles of shed exoskeletons and shit. Man, I’m getting queasy just thinking about it.

Well how about another reason to hate the freaks? Ever heard of traumatic insemination? No? Well buckle up then, friend.

Traumatic insemination is just what it sounds like, pal. Apparently a lot of fucking buggy sociopaths do this, including (but not limited too): nematodes (no wonder Doug hated the fuckers), sea slugs, thorny headed worms (coincidence?), and some spiders. 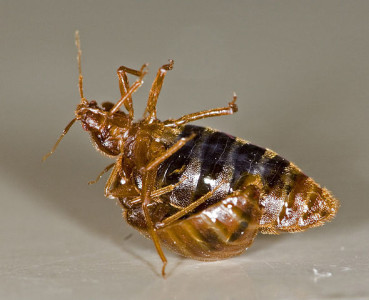 So I guess bedbugs are best known for it or some shit, but DAMN. So, the male bedbug has a penis like a hypodermic needle and he just fucking sticks it wherever, man, shit is maximum-level-fucked-up. This wouldn’t seem like it would, um, work, but as Wikipedia says, bugs have open circulatory systems (we have closed ones) where all the fluids and organs and that gross trash just kind of float around inside a chitinous prison. So, I guess if you shoot semen through a needle into a bug, it will float around and eventually reach the reproductive zone and get the unfortunate little freak pregnant. Please don’t conduct any experiments, you (potentially) sick fuck.

but goddamn aren’t bugs fucked up tho

Read more tomes from the WikiHole:

WTF Is A Hell Pig?

How to prevent misunderstanding while communicating when stressed[edit]