If you’re interested in having a bitchin’ record collection, get to know Sublime Frequencies. (They’re the guys who released Omar Souleyman’s first record back in 2006, when he was still a wedding singer in Al-Hasakah, Syria). This Seattle-based label is doing what I believe to be the most important work in music — giving exposure to obscure international musicians, and giving us a peek into the musical histories of a bunch of countries most Americans forgot even existed. The label’s co-founders, Alan Bishop and Hisham Mayet, travel all over the world, bringing with them audio recording equipment and a keen ear for the unheard. It’s pretty incredible that that’s their job.

The content of their collections vary from radio collages of every genre to field recordings, but they’re all pretty geographic locale-specific and seem to primarily highlight Southeast Asia, North Africa, and the Middle East. I’ll definitely be getting into more of Sublime Frequencies’ catalog later down the line, but right now I want to focus on one of their albums that’s been on heavy rotation these past few months: Thai Pop Spectacular. 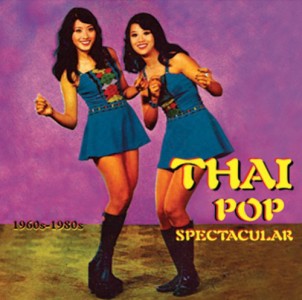 When I was looking up more about some of the artists and tracks featured on Thai Pop Spectacular, I came across this one-star album review written by The Dumbest Cunt in the World™:

“When I put this on the stereo my wife crunched up her nose and said “Why did you buy THAT?” I showed her the cover art, and she said, ‘Oh cute girls.’

That’s not the whole story. I was hoping a 20 year retrospective of Thai music would have some unusual sounds and maybe pathos. Unfortunately, this music did not speak to me at all. I could not find a way into the harmonies and keys used by the musicians – it just sounded out of key to me. And I can often do this with non-Western music, so I was a little surprised by my failure. The audio quality is also pathetic, some of the worst recorded music I have heard. Finally, a really strange sense of humor seems to propell [sic] some of these songs – personally I just found it annoying.

I am writing as a Westerner who has fairly broad taste in world music – for example, I love Bollywood, and kind of like the old Cambodian stuff. If you are unfamiliar with this music, you may want to download a track or two and listen to it before you buy the whole CD, cause frankly, the picture of the girls is pretty small and won’t compensate you for buying the whole CD if you never listen to it.”

This is the musical equivalent of, “I’m not racist, I have a black friend!”

His review lumps “uh… South Asia?” into one musical and cultural category and uses inane comparisons off which he bases his justification of not liking this album. Comparing Bollywood to Thai pop music is straight bonkers; that’s like saying, “Man, I loved the Les Miserables soundtrack so much! But this Pete Seeger album doesn’t sound anything like it, so I hate it. And I like other musicals too, so I was a little surprised.”

Also, “Thai people seem to like to have fun, and it’s so annoying to me.” Also, also, “Ugh, god, my ears. This isn’t FLAC! What the fuck, 1960s Thailand?” Also, also, also, “I love pretty Asian women, but their image can only go so far from insulating me from the shit music of their weird country.”

I went on that rant to ensure that I hammered into you that this album is indeed full of “some unusual sounds and maybe pathos.” I mean, just listen to, “Mae Kha Som Tum” by Onuma Singsiri:

“Mae Kha Som Tum” translates to “Papaya Salad Merchant,” but this music makes it pretty clear that there’s much more to the song than a papaya stand. Is this song not totally haunting? I can hear the heartbreak, the longing. It’s chock full of pathos, dude.

And if you can’t get down to, “Lung Dee Kee Mao,” then… I dunno. Maybe you shouldn’t have bought this album just because it had cute girls on the cover.

There are songs from classic Thai films, the “Shadow Music” sound of Thai guitar popularized in the 1960s thanks to the influence of Western rock ‘n roll, and a bunch of songs that take turns riding the waves of surf, funk, disco, comedy, and traditional Thai folk songs. There’s a ton of horn, weird timing and odd production, and some really impressive intrumentation — and sure, maybe some of the tunes don’t sound “right” to American ears. But that’s our problem, and it’s a problem that can be solved by learning and appreciating foreign stylings that aren’t just [American song with a sueng and khim thrown in the mix].

If you don’t dig this, that’s fine. But don’t blame it on Sublime Frequencies, who went through some intense research and collection to issue this album, and please, please, don’t blame it on these talented and fun musicians. Blame it on your own tastes and sensibilities, and move on.

But come back, because the next album on my list is full of the best stuff — garage rock, surf, and psych howlers from Mozambique, Congo, Angola, and South Africa.