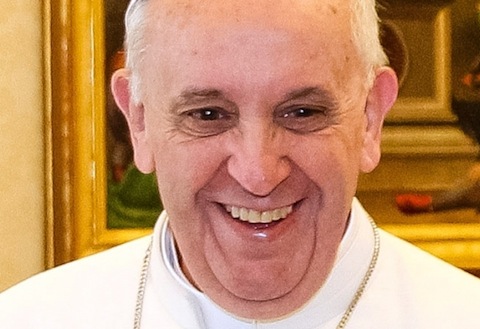 It’s about due that the world got a pope that understands the maladies of society, what needs to be done and most importantly, what does not. The church’s obsession with what we put in our mouths and assholes has done a lot of damage to both society and the church itself through centuries of fire and brimstone political policy.

Now it seems the Vatican has finally seen the errors of their past and is working to catch up to the society it used to be such an integral part of. Case in point, Pope Francis has been dubbed ‘Man of the Year,’ not only by the prestigious Time magazine but also by a rather surprising source, the LGBT magazine, The Advocate, for his revolutionary and outspoken opinions regarding how we should treat homosexuals.

This is absolutely amaze-balls except for one easily overlooked facet –  it’s horseshit!

Fucking smelly, utterly transparent, excrement. The only thing Pope PR has done is add a little strategy to an aged and brittle institution. Instead of standing firm as the Catholic Church always has (until the heat blows over) Francis recognized that right or wrong, this consternation shit ain’t working. People aren’t interested in archaic ideology and ritual anymore. So what’s a guy to do to reel the masses back in? In a testament to our own faltering attention span, he has simply changed the subject.

Don’t be confused, you’re still burning in Hell’s pit if you have a dick and suck a dick at the same time. See Leviticus 18:22 and 20:13 to find God denouncing homosexuals as abominations that must be put to death. See 1st Kings 14:24 for less sharply spoken, but reinforcing statements. See Romans 1:26-27, 1st Cor 6:9-10 and 1st Tim1:10 so you don’t think anything changes in the New Testament. And finally, see Matthew 5:17 so you aren’t under the impression that Jesus, at least according to the scripture, was any different. There he states that all the laws of Moses and the prophets are still to be followed, down to every letter and pen stroke.

Francis just finds the whole topic played out and would really prefer focusing on capitalism and money, issues with which the Vatican is far better suited.

It all started to snowball when The Pope asked simply, “Who am I to judge?”. Well, beyond from being the only human being on earth permitted to commune with The Almighty, Francis was also speaking very specifically about homosexual priests. Yes, men that have taken a lifelong vow of celibacy. How could he give a fuck if he wanted to? You can’t be a gay priest. You can’t even (technically) be a straight priest! This is a non-answer.

For the sake of staying on topic, I won’t even allude to the rampant and persistent child fucking and the conspiracy of cover ups that ensue.

This sleazy facelift for the so-called “Man of the Year” is obvious, as Francis has always been clear where he stands, calling the notion of gay adoption, “Shocking…a destructive attack on god’s plan” and gay marriage bills “…a move of the father of lies who seeks to confuse and deceive the Children of God”, while receiving acclaim for saying we should focus on something else instead. Of course you think we should, Francis, because you’re part of an antiquated hierarchy of bigots and perverts! Why wouldn’t you skirt the issue? And why would we all applaud??

Perhaps you remember when The Pope called that queer to tell him his sexual orientation didn’t matter, somewhat contradicting himself. This is hardly redeeming. The Pope is merely trying to make the Catholic Church look progressive and friendly and he’s succeeding. He’s playing us. There is nothing novel about his stance. Even if it were genuinely accepting, he’s following decree laid down in Article 2358 of the Catechism that demands compassion towards the “disordered” queer population. What is he actually focusing his time on? Hiring more exorcists because he has seen evidence that demon possession is on the rise. Truly the greatest mind of 2013.

Pope Francis is nothing more than a wolf in sheep’s clothing, but at least we know he reads his Bible. It’s probably where he got the idea.

Luke Miller is a writer, geologist, neuroscientist, humanist, stoic nd audiophile who just wants to make the world less tolerant. He’s terribly biased but holds himself to journalistic standards of honesty and it certainly helps that he’s always right.
@kryslam

More ‘deep’ thoughts from De’Lunula:
Bubbles.
Do Banks Steal from You?
Eulogy For Your Internet Fame
LinkedIn is as Jealous and Insecure as my Ex-Girlfriend.
Complicated Books Summarized in Haiku Form