‘Tried to spit in the soul, only got the face’ — 26 Poetic Russian SPAM Tweets 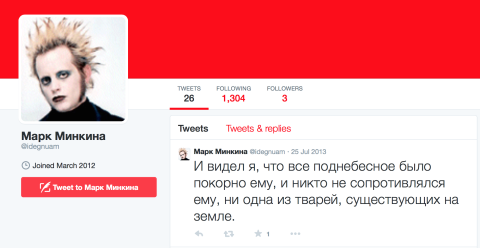 Meet Марк Минкина. He/she is a Russian SPAM twitter account. It’s pretty obvious once you visit his/her account. But to make this account (only 26 tweets) appear genuine, this bot generated some rather poetic tweets. Spam bots often unintentionally appear poetic — these ones, we thought, we especially good. We translated them from Russian to English using Google Translate. Read them below.

And I saw that all was dutifully Celestial him, and no one opposed him, none of the creatures that exist on earth.

And then came the crunch of breaking branches – someone ran here.

It was clear as day that she was not used to people, and it brought on a review of the crowd.

How can this be called premature, sickly baby son?

Other delve into the garbage.

And then at night is simply nothing was to be seen.

You know, for what killed my only son !!!

Runes are applied in a strictly defined order and not otherwise – will not work.

Now she would not have thought of Sergei, had it not been this terrible story.

And followed the army.

We did not make it more difficult to accompany you, ha ha.

Often we went together to pick mushrooms and berries.

Music to the ears, a symphony of death, like the angels cry over the winter forest, turned into mountain of hell.

I looked up from the magazine

Feel yourself a truly stylish person! Now we make you brighter and more attractive in online mode!

He tried to spit in the soul, but only got in the face.

A cat has four legs: input, output, land and food.

Many bachelors dreaming of kpasivoy, intelligent and caring wife. Many married men dream about the same.

People can not be bribed, but it can make a drunkard.