Why Every Guy Should Be Doing Kegels Right Now 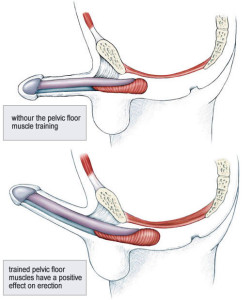 There is one main reason why every man should practice Kegels. No, it isn’t that it helps you maintain stronger erections, nor is it the possibility that it makes your wang (slightly) longer. It doesn’t have to do with the repair of erectile dysfunction, the mitigation of premature ejaculation, or the possible increase of pleasure during orgasm. It is none of these things.

Kegels sure do a lot, don’t they? But one more thing they do is this: they improve control over the bladder. Yes, if you suffer from incontinence, then Kegels can help you gain control. Flex your wee-wee. Get some continence. “But,” you say, “why the hell are you telling me to do these weird ass German smut stretches for my incontinence? I am a healthy young hipster and I don’t need that shit.”

Well, chances are you are a piss dribbling slob and you do actually need this shit. I’ll tell you why. Buckle up.

I’m pretty fucking sick of going into public restrooms and having to avoid standing in a huge puddle of piss every time I want to use a urinal. It’s gross, ok? Even worse than getting the accumulated piss of strangers (which has partially dried so it’s a sort of ooze) on my soles is the idea of scrubbing that shit. Do you think the typical meth-addled ex-con working at a shitty store like Wally World doesn’t have enough on his plate? Do you think he wants to be on his hands and knees with a paint scraper, peeling that layer of noxious slime off the floor?

Well, he clearly doesn’t want to be doing it, because it never gets done. AND HERE LIES THE PROBLEM. Stop pissing on the floor. I know the reason why; it’s because when you get to the end of your urinating session, you’ve gotta get that last bit of piss out your hose. So most guys give the cursory squeeze and shake, and zip it up.

Here’s what I say to this: fuck you. Fuck you and your dick slapping in public. Do some Kegels. Squeeze out all of the piss from your limp dick next time.

Tags: delunula, penis tricks and tips, this website likes penises too much
Previous postPHIXATIVE -- Ryan Avery's Disposable Love Next postThese PHX Comic Con Photos Don't Have Any Cleavage In Them So You Probably Don't Want To Look At Them Sorry