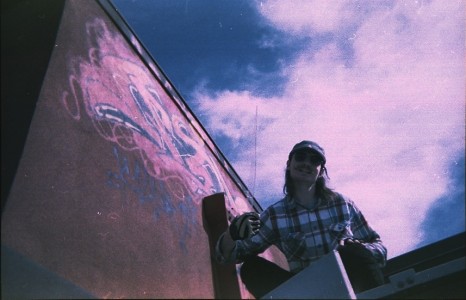 One fine day, Tekel and I were out driving, looking for an opportunity for adventure. This opportunity was a closed down Lone Star Steakhouse off the I-17. There is no spooky or off-color reason this place was closed — Lone Star was dealt a blow by the recession, and they shut down 27 restaurants around the country, leaving them with 152 godless locations. I can only say good riddance; may the rest of the Lone Stars shut down within my lifetime. Not even Texas wants this lowbrow restaurant, as no locations exist within the “Lone Star” state itself.

Pulling into the dead empty parking lot, I parked the Rod under a tree. We tried the doors, to no avail, and we noticed that no windows had been broken that weren’t boarded up. In fact, aside from some graffiti and a junction box stripped of its copper wire, the place was pretty intact. That, however, was only on the outside.

Around the area were a couple oddities, however. The first was the dumpster enclosure had been turned into some sort of miniature hobo jungle. The steel gates were locked into place, the dumpster was long gone, and in its stead stood a jaunty structure manufactured out some cardboard boxes and a dirty sheet. Strewn about this enclosure was junk, presumably of some use to the sub-human that nested there.

Deciding we did not want to enter the enclosure and risk catching Hep A/B/C (or worse), we went back to the building. There, we noticed that someone had clearly leaned their back up against the wall and shat. Perhaps this was done many times by one person, or perhaps people seeing the shit marks of the first thought it was brilliant precedent, but needless to say there are shit stains all over the back of the building. Between you and me, judging by the horribleness and the age of the fecal matter, these stains could have come from someone who had just eaten at Lone Star.

Anyways, on to the breaking and entering: I realized that we could probably get in via the roof. Seasoned urban explorers such as us know all kinds of tricky ways to get in the building. Sure, we could have smashed a window, but why break and enter like a common ruffian when you can break and enter in style? 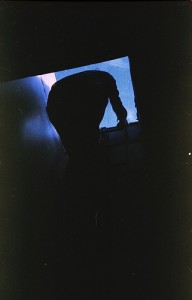 I couldn’t get Tekel to hoist himself up on the roof with me at first, so I went it alone. Using the levers and vents of the busted junction box, I pulled myself up on to a lower outcropping of the roof. After grabbing the top and pulling myself up, I realized that the weird shit I felt under my hands while pulling myself up wasn’t merely debris, it was 15 inch glass shards. Cool. I hauled myself up the next 8 feet all the way on to the roof proper. I looked around a bit, but it had been torn up by meth addicted copper hunters, so I focused on the reason I went up there in the first place – the fire escape. It was a big metal hatch, maybe four by five feet, and upon lifting it, I could see a steel ladder descending 10 feet into darkness.

However, like a fool, I left my adventure bag in the car. What the fuck, man? Why have an adventure bag stocked with all your handy shit, like a flashlight and a bowie knife, and not bring it with you into a building infested with crack whores and syphilitic bums? But I’m getting ahead of myself. As I stepped down from the ladder, I noticed that the floor around it was littered with junk – newspapers, magazines, discarded clothes, plain old trash. Looking up, I saw a black hallway. As I mentioned, I didn’t have my bag, so I had no light, and also no weapon but my fists. So I let my eyes adjust for a second, and I entered the hallway at the ready with my mitts. The place was torn apart. I kept knocking my head on ceiling tiles and light fixtures hanging by a thread, and plastic tubing that once contained copper wire snaked out in bundles from the ceiling. It was very musty, and also one or two degrees warmer inside – not much, but enough to make the must… palpable. There was only one door in that black hallway, as I made my way down.

The door to the deep freezer. 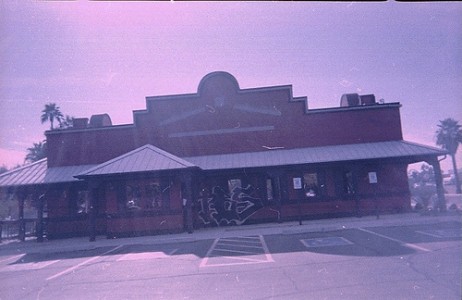 I, being the brave soul I am, determined to open that large, square, steel door. However, I, being the sensible soul I am, looked around at the junk on the floor for something dangerous. I found a piece of pipe about a foot long, and brandishing this in one hand, I opened the door to the freezer. Luckily, no axe killers jumped out, no dinosaurs trapped by kids in the ‘90s jumped out, and I felt a bit silly. I didn’t go in, however, because you never know – maybe that axe killer is waiting just inside the door. Even if there weren’t any axe killers in there, it was blacker than black, and I didn’t want to stumble around and get strung up on the rusty meat hooks no doubt swinging from chains in there.

Moving on. I emerged from the hallway and found a stripped down dining area, and a trashed kitchen. I dropped the pipe, because I was feeling silly, and looked around just a little bit. I then exited through one of the many doors, which were conveniently unlocked from the inside. Tekel was waiting, and he hustled to enter the building by the door I just opened, but I SLAMMED IT SHUT. I told him he had to go in the way I went in. It was the only way – the only way to get the adrenaline flowing, the only way to properly experience this hovel.

So, we scrambled up the same way I had several minutes earlier. We climbed down the ladder and crossed the hallway with the same level of excitement, too. Entering the dining area, we paused and looked around. There wasn’t very much to see. The place had been shut down, the stuff had undoubtedly been sold off, and what was left was rifled through and looted by meth monkeys.

The most grotesque part was probably the women’s bathroom. Well, I should say the cowgirls’ bathroom. This was Lone Star, after all. The floor was strewn with hooker clothing. I mean, Tekel and I had to practically wade through hooker clothes. I’m talking the whole gambit – PVC boots, cheap black lacy things, y’know, hooker stuff.

Why were all these articles of hooker clothing here? If I was a hooker, I wouldn’t discard my threads so willy-nilly. Buying new clothes cuts into profit. Maybe it was just a hooker clothing repository, like a giant dresser drawer. Let’s hope that’s the reason and not something more sinister. Also strewn about the bathroom were meth pipes. The pipes were everywhere – we even inadvertently stepped on a few. The men’s – excuse me, the cowboys’ bathroom — was comparatively clean. By comparatively clean, I mean the walls were kicked in, and the toilets were overflowing with shit, not to mention the mirror which had been clearly head-butted into pieces. But hey, at least we didn’t step on any crack pipes.

Deciding we had enough and finding no good souvenirs, Tekel and I walked out through one of the side doors and jumped in the car and drove off. For an even more bizarre and dangerous adventure, come in the middle of the night, alone. Maybe you’ll surprise a meth freak and her john. Maybe, just maybe, you’ll surprise a meth freak and his john. Only one way to find out! 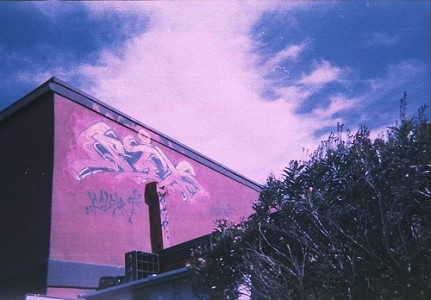 Previously by Sebastian:
How To Make Ketchup Soup So You Don’t Starve In The Apocalypse
de’Lunula’s Ethanol Dossier — The Blueberry Peach Cobbler