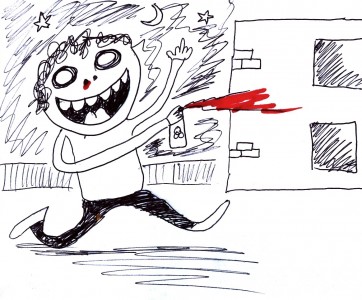 This was many, many years ago. It started at 3:30 in the morning, my roommate passed out drunk in his bed and I was frolicking in the limbo of dreams when someone pounded on my door. I waited a beat. Was it the cops? The landlord? The mafia? Who pounds on the door at four in the morning? I was wondering if I should answer it, but didn’t have to. The door swung open, the lights burst on and there was Steven*, my roommate’s best bud. He was drunk as fuck.

*Steven was definitely not his name. Not even his middle name.

I asked him where we were going.

Steven started blowing out bits of blood in his nose into my sink. I asked if he was OK. He replied, “Oh, it’s just the coke.” Wait, cocaine? Mind you, this was my first indirect interaction with cocaine, so it was somewhat of a mystery to me at this point. I thought it killed you or turned you into a raving addict immediately or something. Now that I know better from personal experience, I can say this is an unnatural reaction to the drug. Or maybe Steven was just an asshole.

“I’ve never done it before,” Steven continued. “I feel like I can do anything. I jumped off a building on the way over here. It must have been 15 feet! I can take on anything! C’mon, let’s go!” And I went. I knew, I knew, I really knew I shouldn’t have, but I went anyway.

The construction site was right across the street from my apartment, next to a late-night sandwich shop. The building was going to be more housing for some college, so it was naturally pretty expensive.

Even this early in the morning, a handful of people were outside and they watched Steven jump the fence. I straggled behind, unsure of myself and they asked me what he was doing. When Stevie Wonder pulled out a can of spray paint and drew a red Anarchy sign they exclaimed, “They’re tagging! Ah, fuckin’ awesome! My buddy here takes pictures of tagging all over town!”

For a minute, I felt like an anonymous celebrity. Had they seen any of my work? I used to tag all over the city too. Maybe these photographers wondered who I was and blah blah blah. Then I was too worried about Steven to focus, as he had grabbed a metal pole and begun to bang it around. He splintered a few boards and hit the fence again and again. “C’mon, let’s go!”

I climbed over the fence against my better judgment and my roommate followed. I was paranoid as hell, but my heart was beating like it was in love. What a rush. Steven painted more anarchy signs, then did the Communist hammer and sickle. He yelled at me, “Anarchy is cool, but Communism is just as cool. They’re pretty much the same thing.” Then, he drew a swastika. It’s not like he was winning brownie points with anyone anyway. I didn’t feel like arguing.

Steven decided to knock over all the outhouses at the construction site. There were five of these goddamned things and he knocked them all over. It was cold out and most of the crap was this half-frozen slushy of diarrhea. I bit my fist to keep from laughing and to keep from smelling the rancid shit as it poured into the dirt. My roommate just watched, slightly amused, still drunk.

Steven ran inside the half-finished building and painted more and more shit on the walls. Ducks and a few stickmen and the word ‘fuck’ a lot. I kept my eyes out, still a bit paranoid. Mind you, I was the sober one out of all of this, yet I was still dumb enough to agree to this. I hadn’t even painted anything. No idea why we weren’t already arrested. Yet, I went inside.

Steven screamed at me that we needed to go up on the second floor. “Okay,” he said. “We can go through the roof, or around the roof. Your choice.” Trying to find an excuse to head back, I said, “I’m kinda cold.”

“Alright! That means around the roof!” He started to climb the scaffolding and was making noise on the floor above. I looked around and saw a person heading toward us. I have no idea who he was or what he was doing. He looked like he had a security jacket on and without risking another moment, I quickly walked away. I tried to signal Steven and my roommate, but they were long gone, spraying away. Fucking the government in every asshole it has.

I hopped the fence and doubled around my building, that way there if anyone saw me leave the site, they wouldn’t know I went directly to my apartment. I loaded up all the paint and stencils I had at home into a tub and gave it to a friend to store, in case my room was searched, because my roommate was involved, after all. My friend was not happy I woke him up at 4:30AM. He told me if they got involved somehow, he’d rip my balls off.

Later, I learned that Steven had grabbed a shovel and went from room to room, smashing all the lights. Eventually, he was caught, but because he was wearing gloves when spray painting (he threw these away at some point) they couldn’t pin any crimes on him. Both he and my roommate had to pay a huge fine for trespassing and later, Steven was kicked out of school for this. But he went back and eventually finished his degree. He still does coke every now and then, but is much more responsible about it.