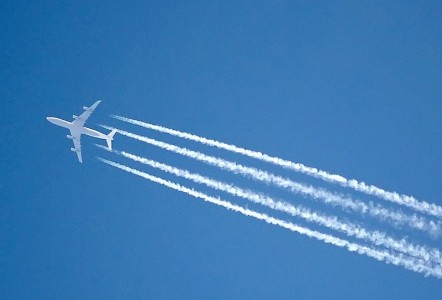 These will kill you. Probably. (via Wikipedia)

So these days it seems there is a steady murmur about a mysterious term, “Chemtrails,” a.k.a. “Holy hell they’re poisoning the air!?” After years of discussion, speculation and hard assumption making, some very serious conclusions have been reached. First, some if not all airplanes on the planet are dumping massive quantities of this chemtrails stuff into the atmosphere 24/7.

Chemtrails are bad. Everyone knows chemtrails are bad. So what exactly are chemtrails? “Heavy metals and stuff,” and “Wait, is that the stuff they used in the 1980’s as hairspray? No, no that’s not it…” are among the most common answers you’ll find. Really, who knows? What matters is they are bad (probably even poisonous), they’re everywhere and it’s getting worse all the time.

So, what’s really going on here? Is this another conspiracy meme or can this chemtrail stuff be attributed to a true origin, if not both? Many people have strong feelings in all directions on this topic, so I think it’s best to break it down to what makes the most sense.

Some people say that the chemtrails are just huge quantities of harmless ice shards floating up in the sky. These people are clearly lying, as anything that convenient and scientifically plausible has to be a secret cover-up, right? Besides, ice can’t float in air! Everyone knows that! So these things must be poison. But who would do such a terrible thing?

There are three major camps for who is behind the chemtrail conspiracy: Aliens, the Illuminati, and of course the mutant reptile folk of Secret Atlantis, each of whom through various ways is manipulating the global political sphere to nefarious ends. The Illuminati and Alien camps share the same essential method: Make sure everyone on the planet is all chock full of this chemtrail junk, issue special antidote pills to selected members of the population (in most cases, anyway), and blast an Ultra-Low Frequency wave that causes the heavy atomic structure of the chemtrails now in the human body to heat up and eventually explode. This will leave Earth fairly empty for whatever the Aliens and/or Illuminati want to use it for.

On the other hand, the Secret Atlantis ice lizards have the most fearsome plan. According to somewhat credible sources, nanotechnology is extremely advanced in Secret Atlantis (evidently they were smart and invested big early) and they plan to use it to change the Earth’s climate. This argument carries the most weight because really, how else can climate change be explained? If it makes sense, it must be true, just as our ancestors have taught us.

At this point you must be asking, “What can the average dude do to survive this imminent doom?” Well, most people believe that maybe by getting on some sort of short list that gets the antidote pill when the time comes. Unfortunately, the Chosen Ones, as implied in the name, have been predetermined. The best bet for the sensible person is to strike up on a quest to find and conquer Secret Atlantis with Combat Magic passed down through the ages learned on another separate side quest.

However, if you’re anything like me you’ll probably just hope for the ice shards in the sky thing, then possibly have nightmares about somewhat large spikes of ice falling at you from high above when it’s so cloudy you can’t see, but they just keep falling, falling, falling.

Kenan Laprath is an imaginaut, delving deep into strange imaginary places on a somewhat consistent basis whose goal is to improve humanity by constantly learning and sharing that information in a mildly radical way. He is a musician, poet, astrologer, counselor, Head Chieftain of Harmonious Juju, and all around fun guy, amongst other things.