‘Energy Charge’ Defies Everything I Hate About Video Art 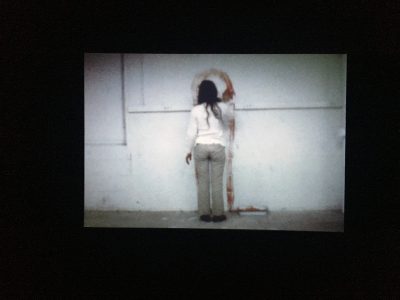 I went to ASU for two years before I realized they had an art museum. Every day I would walk around the Mill area, pass by Gammage and the Organ Hall, and not once did I wonder where that nearby flight of stairs cascading below the pavement led to. And then one day on a whim I descended those stairs into the underworld and found myself in the ASU Art Museum’s lobby. I was struck by the place’s unique, esoteric vibe. Thanks to its location it feels like a secret, like some hidden level found in a video game that can only be accessed by walking through a wall or plunging down the right pipe. It’s the perfect place for an exhibition as mysterious and occulted as “Energy Charge”, now on display at the ASU Art Museum until Dec. 31st. 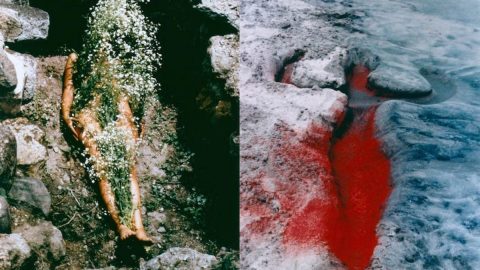 “Energy Charge” focuses on the art of Ana Mendieta, an artist whose performance art, installations, and film work has inspired generations of artists. The exhibition not only showcases her body of work, but also has rooms dedicated to several other female artists whose own work has inspired by Mendieta.

The first artist I come across is Antonia Wright, a video artist. Before coming to “Energy Charge”, I read up on the exhibition and found out that a good portion of the show would be dedicated to video art. Real talk: 9 times out of 10, I fucking HATE video art. It wasn’t until I saw Bill Viola’s “The Raft” at PAM’s Da Vinci exhibition that I started to see the value and beauty in the medium. 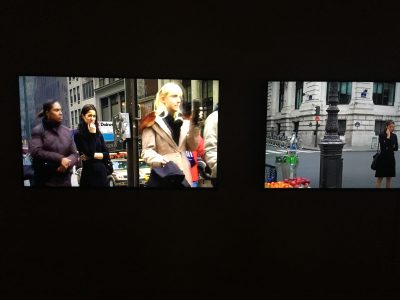 Antonia Wright “Are You OK?”

Digression Time: Why I Hate Video Art, in 3 Bullet Points:

That being said: “Energy Charge” may have completely redeemed video art for yours truly. The exhibition was heavy on this medium, and all the pieces on display were worth watching in their entirety. Antonia Wright’s pieces, in particular, really stood out. In one series, “Are You Ok?”, she split screens two films of herself weeping in public. She stands there and cries, sometimes for minutes on end, until a stranger approaches her and asks if she’s alright (interestingly enough: The stranger is always an older woman or group of older women, never a man or someone in Antonia’s age group). As soon as she’s comforted, the video ends and starts up with her crying again in a different location. Watching how LONG it takes for her to be approached is heartbreaking: You can even see people lurking on the edges of the camera (including a mother and her child) who seem like they’re internally debating about whether or not to make an approach before walking away. 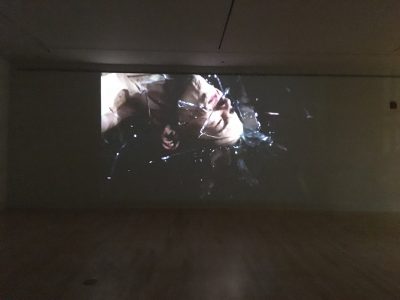 There’s also pieces that show Wright rolling naked down a sludgy, oily alleyway and one where she films her naked body smashing through panes of glass in slow motion. “Suddenly We Jumped (Breaking The Glass Ceiling)” is as hypnotic to watch as a great GIF: I must have spent 10 minutes watching Wright’s face pass through a shower of broken glass over and over again. 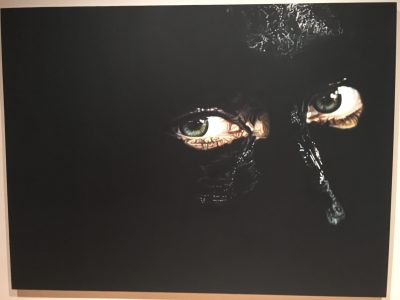 The floor above Wright is dedicated to the artists Kate Gilmore and Ana Teresa Fernandez. The section dedicated to Fernandez focused on her striking piece “Erasure”, in which she filmed herself in a black room being covered in dark paint. The amplified sounds of the paintbrush bristles scraping across her skin sounded like sizzling noises, as though her entire being was being burned up and devoured by the viscous black paint. By the end of the film, the only things untouched by the black were her huge white eyes; As soon as she closed them, she merged perfectly with the black room. Her disappearance was one of the most haunting things I’d see at “Energy Charge”. 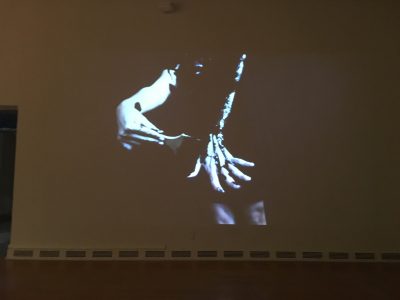 Kate Gilmore’s work included videos of women in floral dresses trying to tear apart a huge mound of mud (“Sudden As A Massacre”) and of herself climbing up steps to paint a room by hurling pots full of paint onto the floor (“Love ‘Em, Leave ‘Em”). While not as tense to watch as Fernandez’s work, the sense of playfulness in these pieces and Gilmore’s use of bright colors made them an interesting contrast to her neighbor’s work. A platform suspended by four cables also hung in Gilmore’s section, to be used in live performances of her piece “All I’m Taking With Me” that will be happening throughout the exhibition’s run. 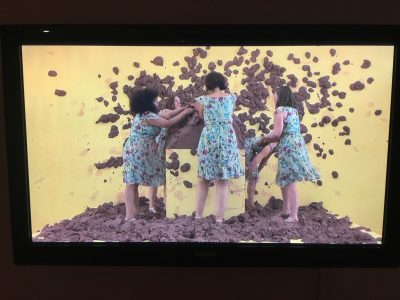 Kate Gilmore “Sudden As A Massacre”

On the other side of the second level was a room devoted to works by Gina Osterloh and Simone Leigh. Leigh’s side of the room was screening several different angles of her video work “Waiting”, which featured the artist up to her neck in a spinning ceramic vessel. Leigh’s blank, almost bored face in the ceramic pot made her look like a pharaoh being mummified in clay; The pot spun around her, a giant top in perpetual motion. 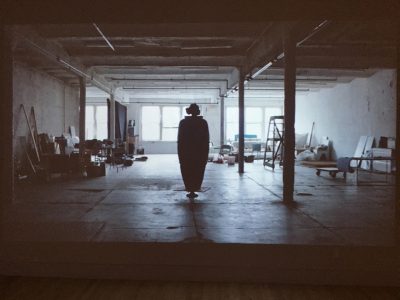 Osterloh’s side of the room featured photographs of her being obscured by bright fields of colors, flowers, and other kinds of print materials. Buried beneath these colors, the only part of her body that’s visible is her mouth, a small red lacunae in the heart of her prints. There was also supposed to be a film screening in there, “Press and Outline”, but the projector was down during my visit. 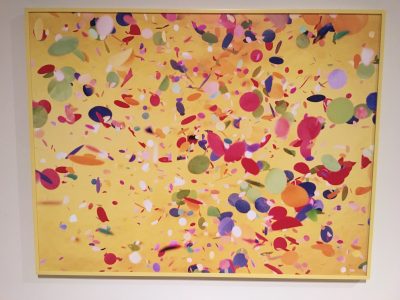 While I enjoyed seeing Leigh and Osterloh’s work, their room didn’t grip me in the way the other parts of “Energy Charge” did. I headed downstairs to see the star that all these other artists were orbiting around: The Ana Mendieta gallery. Her portion of the exhibit did not disappoint. One room featured photos of her “Siluetas” series.: Pictures of her body’s imprint in snow, full of blood; her outline set ablaze like a wicker man; Mendieta laying naked in a rock pit, covered by bundles of baby’s breath.

The Siluetas have an eerie, pagan power to them. Some of them look like they could be crime scene photos of ritual sites, while others look like freshly excavated ceremonial chambers. One could imagine the photographers of these sites being perplexed detectives or awed archaeologists. Her outline in the earth looks like it could be a portal to another world. I hesitated to stare too long at the siluetas, for fear of what I might see crawling out of them. 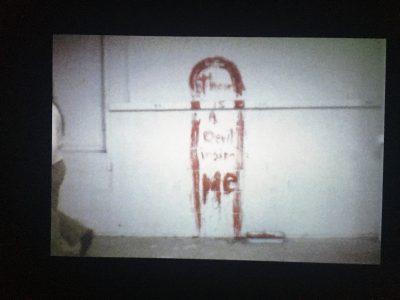 Next to the gallery of “Siluetas” five of her videos screened simultaneously in a dark room. These shorts played silently, depicting Mendieta doing more of her “Silueta” work. In one short she lays naked and immobile in a stream; in another her face stares steadily ahead as blood seeps from her scalp, dripping slowly down her face. In “Burial Pyramid”, she lays buried under a pile of rocks; The rocks heave violently and tumble as she breathes her way out of the rocks, making it look like she’s being born beneath them. And in the eeriest of the shorts, she makes an archway out of blood with a cryptic and unnerving message written inside it. The films were shot on either 8mm or 16mm, and lack the kind of polish you’d normally see from films of that era. They look like occult home movies, the kind of films that a clueless horror movie character would find in an attic and watch at their own peril. Mendieta casts a spell in these films with her presence; You could almost believe she could step out of the screen at any moment. Mendieta is the only dead artist on display in “Energy Charge”, and yet somehow she feels more alive and present than the rest of them.

“Energy Charge” is on display at the ASU Art Museum until Dec. 31st. Admission to the exhibit and related performances is FREE.