Here’s where I would put a profound statement about zines if I wasn’t too drunk to come up with one. Zines are cool, like punk rock and sex with attractive people and drugs that get you high. Here are some reviews of zines and places you can get them. Want us to write about your zine? Drop us a line at delunula[at]gmail.com
–Andre D. 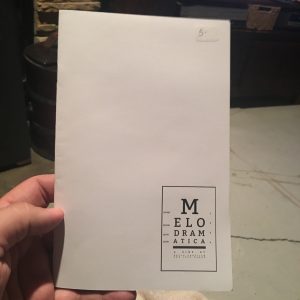 Melodramatica // all fotos by author.

“I hate when I throw parades in my sleep.”

Poetry zines can be really hard to write about. When they’re good, they can be revelatory reading experiences. When they’re bad, they’ll make you wish you could pluck your eyes out of your sockets and let them soak in bleach overnight. But when the poetry is just… there…. what then?

“Melodramatica” is a poetry zine and collaboration between Jeff Darge and Bella Castillo. Darge supplies the poetry and Castillo does the drawings. Castillo’s art elevates “Melodramatica”, giving it a “replay value” that a lot of other pure text-based poetry zines lack. There are certain pieces in “Melodramatica” that I would have zero desire to read again, but I’d always have time for the accompanying illustrations. Her style is economical yet elegant: Whether it’s depicting a pair of ballerina shoes or an astronaut vegging out on a Lazy-B, her black & white drawings imbue these images with a playful spirit.

As for the poetry: It’s there. It isn’t bad, by any stretch of the imagination. Darge has an appealing style, direct and to the point with short lines. It’s just that I found it hard to relate to most of the pieces- Like the most personal poetry, it feels closed off. If I could find a small doorway that would let me inside Darge’s mind for a day, I’m sure I could vibe with these pieces. But alas: I’m trapped in my own head and he’s trapped in his, and try as I might to cross them, the poetry in “Melodramatica” makes for a rickety bridge between us. 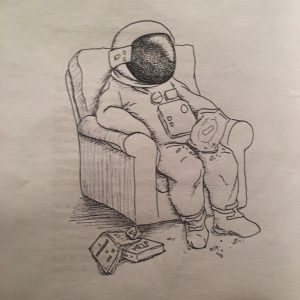 To be fair: There IS one poem in “Melodramatica” that knocked my socks off. It’s the last poem, “Energy”, in which Darge is having a conversation with a talking dog who’s hitting him up for some money. It has a surrealistic feel and it’s quite funny; It pulses with a vitality and energy that makes it truly stand out. It feels like it belongs in a different collection of poems entirely.  If Casillo and Darge get together to do another poetry/art zine that is full of pieces like “Energy”, I’ll be the first one in line to buy it. 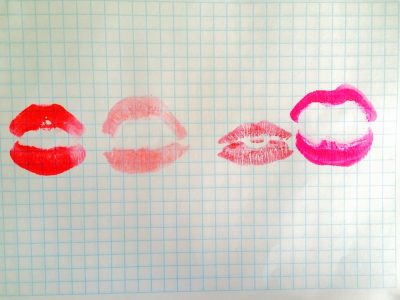 “I bet he smokes weed but doesn’t drink. I bet he’s had a profound acid trip. It probably changed his whole outlook on life. Maybe that’s when he decided to start looking handsome in airport gardens.”

“Every issue has got a different a lipstick print on it,” the clerk at Lawn Gnome tells me. There’s an entire row of Pity Party issues in their “Zine Zone”. And true enough- each with a different set of lips. Some are kissed bright red, others look faded and gray like they’ve been making out with a ghost. On the back of the zine is a paragraph by Audrey Wollen explaining Sad Girl Theory. The first line reads:

“Sad Girl Theory is the proposal that the sadness of girls should be witnessed and re-historicized as an act of resistance.”

That idea sold me on the zine right away. It was an intriguing notion, the idea that sadness, depression, and just being straight-up bummed out could be a political act, perhaps even a liberating one. And of course it’s the kind of idea that only could be taken seriously if it were proposed by women. Imagine if some extremely earnest dude tried to suggest that drying his tears on his cardigan sleeves while listening to The Smiths was an act of resistance: He’d be buried under an avalanche of Get-The-Fuck-Out-Of-Heres and eye-rolls. His Marxist Sadboy zine, “Heaven Knows I’m Militant Now”, would be lining birdcages throughout the world. 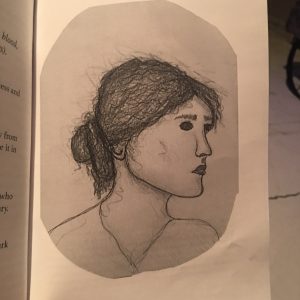 “Pity Party” is a worthy read, one that’s destined to not be toilet paper for birds of paradise anytime soon. It features a collection of poems, prose pieces, and other fun bits (like a game of Sad Girl Bingo). My feelings on the poetry half of the zine are closely aligned with how I felt while reading Jeff Darge’s poems: The poems are competent, well-structured, and too personal to relate to. I’ll concede that not being a Sad Girl means that there’s a good chance I wouldn’t be able to connect with the pieces in the first place.

But I think it’s more than an issue of target audiences or gender: Some of the poems are just incredibly personal and withdrawn. Reading them is an intimate experience because they’re clearly such meaningful pieces to the writers who’ve produced them. But there were moments where I yearned for more, for context, for some better understanding of what inspired these pieces, who they were addressed to, more flesh on the bones of these poems. I was hungry for details.

On the other hand: I REALLY liked the prose pieces in “Pity Party” because they were so detailed and specific. Raquelle Potts’ story about a waitress serving a large (and thoughtless) church group at her diner was a major highlight. The piling on of details about what it’s like working at the diner, the little character bits involving her manager and the snarky line cooks, the way she’s able to convey the horrors of waiting on a massive group of cretins: I felt like I was right there with her, wearing the same ranch-drenched apron. 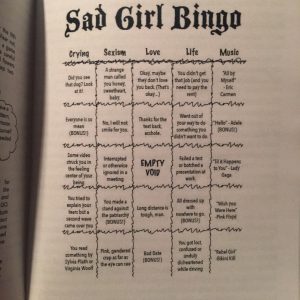 Jamie Leland’s “Airport Garden” was another strong piece, in that it spends almost its entire time indulging in one of the all-time great pastimes: People watching. Leland’s narrator is scoping out a handsome guy at the airport who is conspicuously reading a large book. The woman in Leland’s piece wonders about the guy, his intentions, his background, his body. It feels incredibly true to life. It also feels a little out of place with the other pieces in “Pity Party”. Whereas most of the poems and other prose pieces feature women who are sad or stressed out, the narrator in “Airport Garden” doesn’t seem unhappy. On the contrary: She sounds self-assured and in-control.

On the whole, I really enjoyed reading “Pity Party”. It’s a strong collection of work. If I have any major criticism of it, it would be that the blurb on the back from Nollen made me think that the zine would touch on more overtly political themes and ideas. Not just “the personal is political”, but actually talking about politics too. There isn’t much of that in “Pity Party”, but that’s alright: Few things ruin a good party faster than talking politics. 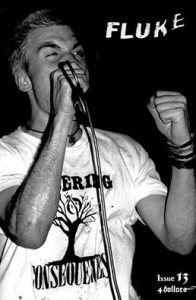 “It’s the people who put in the sweat that make a scene go.”

Fugazi were legendary for putting on cheap shows. Paying $5 to see a band of their stature is just nuts. Throughout their career, they could have asked for significantly more money from people and they would have gotten it- hell, they would have DESERVED it. But as a matter of principle, they kept their art affordable and accessible. I wonder if that is the same reasoning behind Fluke’s $4 cover price.

$4 for a zine of this size and quality is an insane price. To say its generous is an understatement. I have no idea how much it must cost to print out a run of zines that are as dense as these Fluke issues are, but I would be surprised if they’d be able to break even at just $4 a pop. Even if the zine was pure dogshit, I would have to give them props for making their work so accessible. 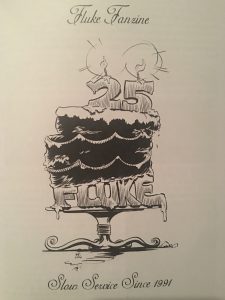 Luckily Fluke’s 25th anniversary issue is far from dogshit: It’s a very compelling zine, put together with strong layouts and striking photos. This issue focuses entirely on the punk scene that emerged in Little Rock, Arkansas. Fluke digs through the scene by not just talking to bands, but also talking to the people who helped make the scene happen: Promoters and graphic designers and the peeps who put up the fliers get just as much print time as the musicians themselves. It does a great job of not just letting you know what the Little Rock scene was about, but giving you a sense of what it was like to live through it in the first place.

There are great stories scattered through this issue about skater kids growing up in high school, about Fugazi tricking out the inside of their touring Penske truck (they nailed in Lazy-Boys and furniture to turn the back of the truck into a living room), about Tav Falco taking a chainsaw to a guitar in front of Alex Chilton. Interviews with Falco from Panther Burns and James Brady from Trusty go in depth on what it was like playing (and eventually leaving) the Little Rock scene, and also include insights about people like Chilton, Ian MacKaye, and artist buZ blurr.

What makes this issue interesting is that it approaches its subject in such a way that even if you have zero interest in Little Rock’s scene, it’s still a fascinating read. While I doubt I’ll be doing a deep dive into the music of Econochrist or any of the other Little Rock scene mainstays anytime soon, I’m glad I was able to spend some time getting to know them and their community. 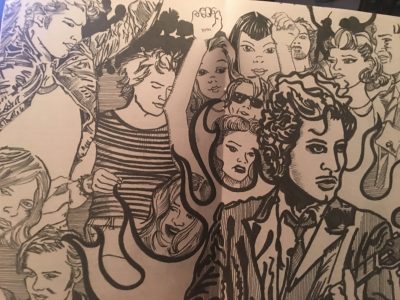 In addition to the lengthy interviews, Fluke also has some fun crosswords and one word horoscopes mixed in. Not bad for a measly $4.

Fluke is available at Wasted Ink Zine Distro, Lawn Gnome Books, and at their online store.

Want us to write about your zine? Drop us a line at delunula[at]gmail.com