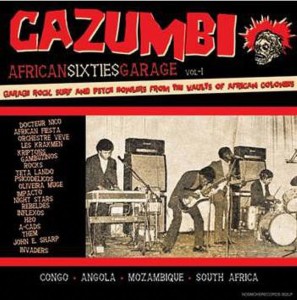 Here’s an interesting thing about this album: all the tracks are exclusively by bands from Congo, Angola, Mozambique, and South Africa. While all of these countries are independent now, they were colonies during the time the majority of these songs were recorded, which is why this album has the tagline, “Garage rock, surf, and psych howlers from the vaults of African colonies.”

Here’s an interesting thing about this album, pt. 2: Most of the bands listed have names like Os Impactos, Gino Garrido E Os Psicodelicos or Conjunto Night Stars — certainly not traditionally African names. In fact, the majority of these band names have Portuguese origins, which makes sense because until 1975, Mozambique and Angola were both under Portuguese control. In the 1960s, Portugal had its own garage-rock renaissance going on (yes, there will be a compilation album about that soon enough), so it’s really interesting to see the migration and influence of rock ‘n roll as we know it into these countries by way of their colonizers.

[I feel like it goes without saying here that Angola, Mozambique, Congo, and South Africa all have rich musical histories of their own, which may have contributed to the creation of rock ‘n roll in the first place. Portugal, by extension of the rock ‘n roll craze of mid-century America, by no means “introduced” good music to Africa. That’s absurd, and will quickly be dismissed when I post some traditional sub-Saharan tunes that remained untouched by the hand of colonization.]

If you can name a country, a garage/psych compilation for that country exists, I’m sure of it. For me, the most fun part of these comps isn’t necessarily “finding new music,” because — let’s be real — a lot of garage rock from this era sounds pretty similar. What’s so interesting to me is seeing the changes in vocals and instrumentation; each country has its own style that seeps into these songs, making each one subtly different from the last.

What’s also so astounding is how prolific this genre is; it was everywhere. You’d be hard-pressed to find a genre that took on as much as early rock ‘n roll. It was universal. It was the music that everyone wanted, before they even knew they wanted it.

Sorry about the departure from the album at hand. Let’s get back to Cazumbi.

A few of these bands are the brainchildren of expats who brought over their own musical influences to the region. Take the A-Cads, for example; pretty much every member of that band was born in Britain. Which, uh, kind of makes sense, as their one song on this compilation is, “Down the Road” — a version of an early Rolling Stones song called, “Down the Road Apiece.”

But this album is far from just old British dudes living in South Africa. I particularly dig the work of Teta Lando. Lando was born in the capital city of the Portuguese-speaking Zaire province of Angola, and the majority of his music (sung in both Portuguese and the local Kikingo) focused on Angola’s civil war and the effects it had on those of Angolan identity. It’s pretty melancholy. I think this song, “Muato Wa N’Ginjila,” is gorgeous:

And then there’s Nico Kasanda (Docteur Nico), a Congolese musician who achieved a good amount of fame for being a crazy good guitarist and composer. He ended up playing in L’Orchestra Africa Fiesta, and created both a new technique of playing guitar and a new music genre. I heard he was even pals with Jimi Hendrix. Nico is a bona fide badass.

My favorite track on the album, though, is “Les Krakmen” by Bantous et Mujos (incorrectly listed as “Krakmen Twist” by Les Krakmen). I’ve had a hard time tracking down any information about these dudes, other than the fact that they’re Congolese and may have gone by the name Super Bantous Avec Mujos. I dig this song so much, and for some reason, it reminds me of Andre William’s “Bacon Fat.” I don’t know why. They don’t even sound that similar. It’s just one of those things, I guess.

There’s always been some weird stigmas attached to African countries. People treat the entire continent as one country, and there are assumptions that everyone, everywhere, and everything in Africa is behind the times, corrupt, and incredibly primal. I love this album so much because it pushes all those stereotypes out of the way. I mean, these guys were making hellish and wonderful and crazy and modern and bangin’ rock ‘n roll 50 years ago!

Cool stuff happens all the time, everywhere. You just have to look for it.

Anyway, the next album is gonna take a break from garage and psych, and instead focus on traditional folk and country (and some rock ‘n roll — ya got me) from the most ignored and forgotten people in North America: the Indigenous populations.