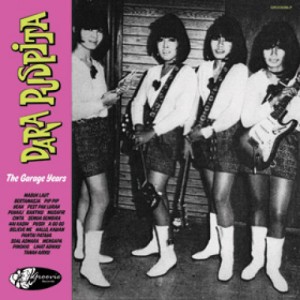 Let me be up front: I’m not really going to talk about The Garage Years here. Dara Puspita is famous, and they rule, and this album is the best collection of their best songs. I don’t need to spend any of our time convincing you of this, because it’s just… it is.

What I am going to talk about is the band. This Indonesian all-girl four-piece has one of the most interesting and inspiring stories, and it needs to be told (although it has been — many times). Stick around, and you’ll be rewarded with tales of oppressive regimes and a mysterious German named Mr. Bootz and prison and in-your-face, fucking flat-out girl power. But I’ll be sure to throw in some songs off the album here and there, so you can aurally remind yourself why these girls were so cool.

In 1945, Soekarno became the first president of Indonesia after being a key figure in Indonesia’s fight for independence from the Dutch. That was all fine and good, until he ended up instituting an autocracy that included a series of aggressive and oppressive policies (aided by the Soviet Union and China) under the guise of Anti-Imperialism. That wasn’t all fine and good. Simply put, Soekarno was a real dick, and he hated all things fun or vaguely Western — especially the rock ‘n roll of the early 60s.

He was particularly vengeful against Dara Puspita, because not only were they playing rock ‘n roll, but they were women –– women who wrote their own songs and played their own instruments and were unapologetic in their badassery. They were brazen and loud, and they writhed, wiggled, jumped, crowd-surfed, and generally blew the roof off any show they played. They weren’t a cutesy bubblegum-pop girl act. They rocked, in every sense of the word — totally unprecedented stuff for women in general, especially ones in mid-century Southeast Asia who were taught to be meek and subservient. Soekarno really had it out for them, calling them “an illness” and claiming that theirs was “music for the mentally deranged.”

In June 1965, Dara Puspita and their “brother” band, Koes Bersaudara (The Koes Brothers) were booked to play a house party. Not too long into the set, an angry mob formed and began stomping on the roof, breaking windows, and pelting members of all the bands with stones. Both Dara Puspita and The Koes ended up being arrested, and while the former managed to escape jail time, the latter wasn’t so lucky. The Koes Brothers served three months.

It’s crazy that this is the type of music that landed them in jail. I wonder what Soekarno would’ve thought about The Cramps.

During those three months, Dara Puspita skipped town and headed over to Pattaya, Thailand, where they picked up local influence and actually had a really good time. They even began singing some songs in Thai. That’s where they wrote “Pantai Pataya”:

They soon headed home to Jakarta, where they released their first album Jang Pertama (“The First”) in 1966; of course, it was a massive success, and over the next two years, they released three more LPs and became Indonesia’s No. 1 band, much to the chagrin of Soekarno.

By 1967, Indonesia had had enough of Soekarno’s 20-year Reign of Bullshit, and essentially ousted him in a coup d’etat. His post was taken over by Suharto, who admittedly had his own forays into corruption and authoritarianism. But Suharto, at least, was lighter on the artistic community than his predecessor, and he ushered in a new era of Indonesian music renaissance.

Less than a year later, Dara Puspita was approached by a mysterious German agent named Mr. Bootz, who was visiting Jakarta with another all-girl group, The Candy Girls. The rest was a whirlwind: Bootz locked in a three-month deal for Dara Puspita in Hungary that eventually turned into a wildly successful three-and-a-half-year European tour. When they returned to Jakarta, they were selling out 23,000-seat stadiums filled with fans who had really, really missed them from 1968 to 1971.

That’s really all there was to it. Even though their career only lasted seven years, Dara Puspita achieved something no other Indonesian women had done before them, and I doubt there have many who did the same after them. They’ve served as the inspiration behind a myriad of garage and psych bands since, most notably The Cambodian Space Project, whose founder Julien Poulson produced a series of really cool screenprints immortalizing these ladies. He calls them the “Pussy Riot of the 1960s” — though their lyrics weren’t very controversial, Dara Puspita itself was.

Yaaaaa, yipee yipee ya ya ya!

I’m not entirely sure what I’ll be posting next week — maybe some weird Chinese garage covers, or maybe an album highlighting the influential, yet short-lived, USA Records. Choose your own adventure!