Smear Yourself in Literature at Lit Cream!

Hey y’all! At de’Lunula Media, we like to host weird events, like our Screeners series (which may return someday). We started a new thing called ‘Lit Cream,’ which will remove your acne and freshen up your skin.

Wait, actually, it’s dead authors read by local Arizona poets. The first one, themed ‘My My Madness‘ is September 1st at The Coronado. The second event, themed ‘Suicide Ain’t Painless‘ is October 13th, also at The Coronado. A third Lit Cream is in the works, so let us know if you want to be a part of it.

The idea came from a desire to share obscure literature from authors who can’t read it in public themselves (in this case, it’s because they’re you know, dead). So for ‘My My Madness’ we’re going to have readings of William Gibson, Harlan Ellison, Italo Calvino and others read by local writers Sarah Hibner, Ernesto Moncado, Ashley Naftule and Ash Ponders.

For ‘Suicide Ain’t Painless’ it will be readings of authors who have killed themselves: Anne Sexton (read by Rosemaire Dombrowski), Sylvia Plath (read by Yael Grauer), David Foster Wallace (read by Ashley Naftule) and Hunter S. Thompson (read by Troy Farah.) We will also have a guest speaker who will discuss why suicide is a problem in our country and what to do if you’re feeling like ending your life. It should go without saying, but de’Lunula isn’t trying to advocate suicide, but address this taboo subject and it’s relationship to creativity.

We hope you’ll join us at these events and others that are upcoming. Here and here are the Book of Faces event pages again. You really should just follow us on social media so you know what we’re planning next! Here are the event fliers that you should click to enlarge, done by Mene Tekel. 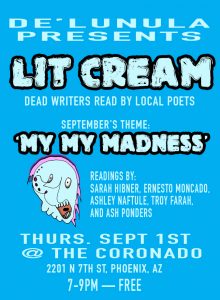 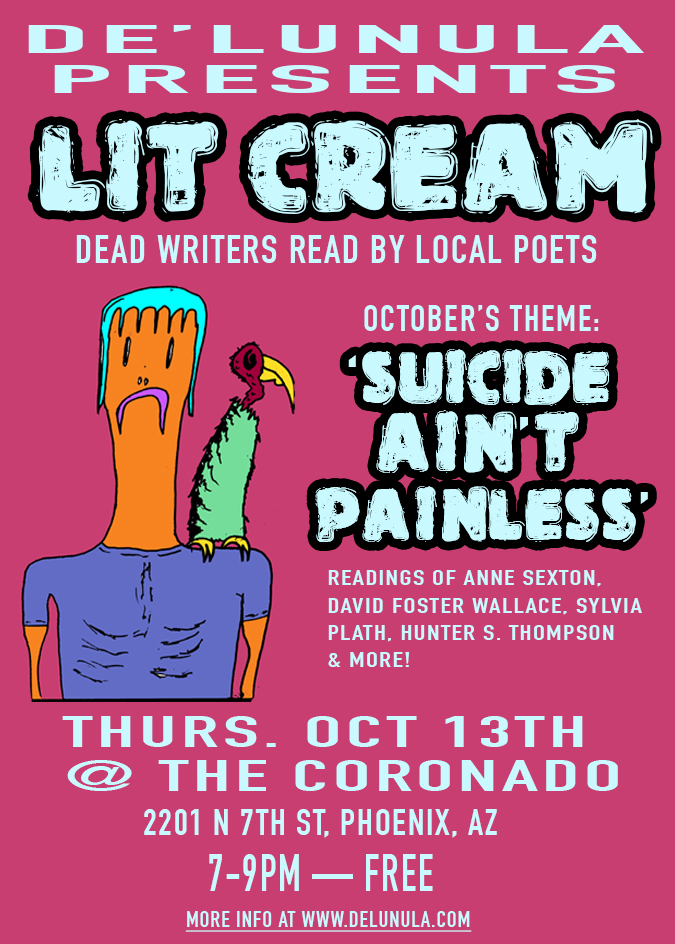