Abandoniers! — We Broke Into This Deserted Office On Central Ave. 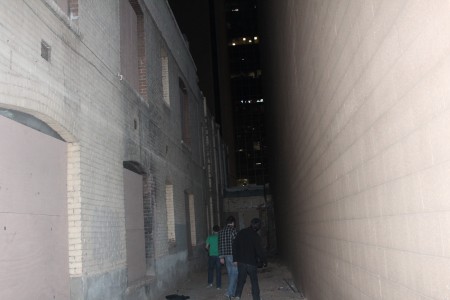 Abandoniers! is a new column about breakin’ and enterin,’ tresspassin’ and trangressin’ — and all the cool shit you find. Wanna share your urban explorations? Send them and any pictures ya got to [email protected]

We were sitting in Seamus McCaffrey’s, planning our next course of action over Blue Moon and fried mushrooms. Kiddy-cornered to this downtown Irish pub is the 12-story, 1931-era bank building that lost everything in the housing market crash. It’s been empty for a long time, but never seemed accessible. Until now.

Well, not exactly. We actually broke into an abandoned office/hotel/whatever adjacent to the landmark art deco bank. The bank didn’t have any viable entrance points, but the neighboring small, squat building had a door that was busted wide open.

It was Sammy and Ty who had noticed the door the night before and gone a little ways inside. Now, we wanted to go deeper. First, we did a perimeter march around the block, noticing three parked police cars, zero security and who, if anyone, could see us from the Ghost Lounge. We were nervous, but after a drink or two or three, it didn’t matter.

We were going in.

We gave Vinny a walkie-talkie and Jeffy the other. He was eager to get inside so he went first and we followed. Five people, stepping gingerly over a broken door and entering an abandoned building on a main street in downtown, without being noticed.

The first room was a dark hallway covered in broken drywall and bricks. We took a left, entering an open desk area with a fireplace. Office supplies were strewn about, but it was still too close to the front doors for comfort, so we quickly moved on.

Outside, Vinny radioed that he could hear us, so we briefly checked out the rooms on the bottom floor and climbed up to the second story. Here, it was a lot of the same. The rooms were all bare, except a few with some lame graffiti, the pipes and wiring torn out of a few rooms, but nothing looked recently occupied. The hallway was incredibly creepy and none of us had any idea the walls were that ugly shade of green until after the flash revealed the true color and we reviewed the pictures.

One room had a caved-in roof and the board covering the window was kicked out. We could have climbed out and been right next to the bank, if only the windows there weren’t boarded up and there wasn’t a spiky sea of rebar poking out of every side.

We didn’t go on the third floor, which was just the attic. We agreed we were pressing our luck and took off. I was one of the last in line to get out the door and freaked out because I heard voices on the other side. Voices like, “What are you doing?” and “How’d you get in there?”

But then I heard laughter and figured it was safe to follow my friends. The voices outside belonged to some off-duty firefighter dudes who just happened to be walking by, presumably on their way to the bar we’d just left.

They were curious and asked us what was inside and we told them in earnest. They seemed impressed, these guys who could all probably lift us and throw us a few yards.

We closed the door so that no one else would think to go inside, to save the place for later and then headed off to another bar to drink celebration beers. More pictures below, click to enlarge. 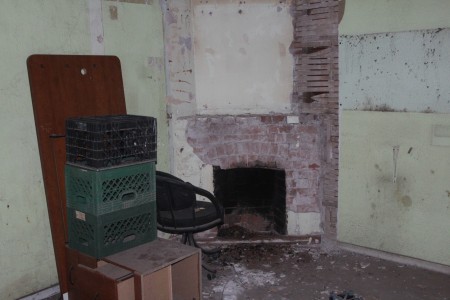 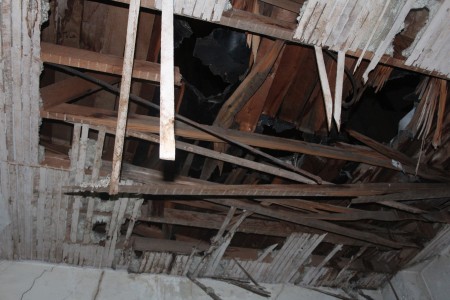 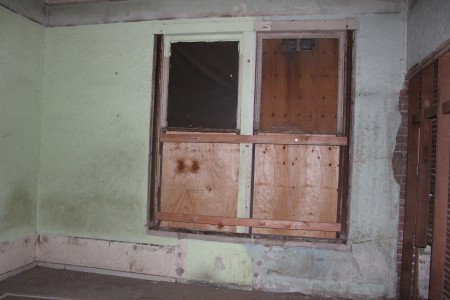 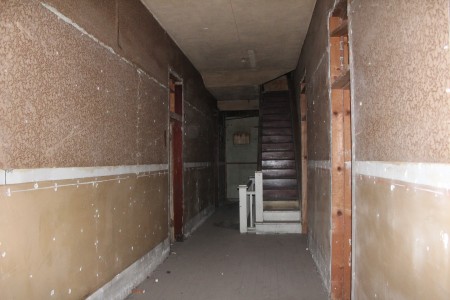