Abandoniers! — Who Wants to Buy Santa Claus, AZ? Nobody. 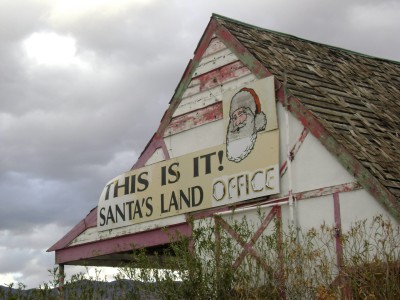 On a lonely stretch of interstate connecting Phoenix to Las Vegas sits a collection of derelict buildings so innocuous that only the most well-seasoned veteran of Route 93 is likely to even notice them. Abandoned tenements are nothing out of the ordinary in these parts, their slow decay testament to the mid-century glory days of the cross-country road trip, yet there is something about this particular vestige of America’s kitschy past that feels anomalous even in the land of the roadside curiosity. Perhaps it is the red and green pinstriped pillars against the beige backdrop of creosote and big galleta or perhaps it is the stray tinsel caught in the barbed wire fencing surrounding the buildings waving in the mild winter breeze. In all probability however, it is the signage advertising the sale of these four acres of prime real estate in the Mojave Desert, otherwise known as Santa Claus, Arizona, which arrests the unsuspecting motorist’s attention.

Now little more than a handful of buildings in various states of decay nestled in between two billboards advertising Harleys and life insurance with a great view of the Gambi Landfill to the northeast, the outlook for Santa’s Land was not always so bleak. Founded in 1937 by Los Angeles transplant Nina Talbot, Santa Claus, Arizona was meant to become a major tourist attraction which would help Talbot sell off the subdivided 80-acre parcel of land. Talbot, self-described as the biggest real estate agent in California (which is something of a double entendre, given that she weighed about 300-pounds), had visions of grandeur for her little fledgling attraction, hoping that Santa’s Land would give rise to a full-on Santa-themed resort town in the middle of the desert. 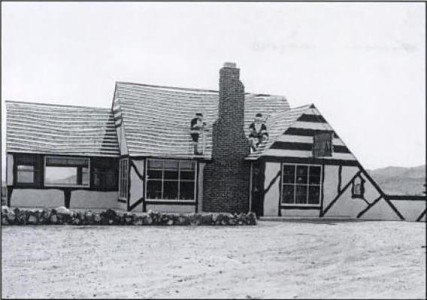 Santa’s Land had a deceptively promising start, attracting hundreds of visitors annually by the early 1940s including minor and major celebrities alike, such as science fiction writer Robert A. Heinlein and film actress Jane Russell, who once threw a dinner party there for her close friends. The tourist boom prompted the erection of several new buildings including a post office, a Swiss-themed ‘Cinderella’s Doll House,’ a Santa Claus Inn and a land sales office, for those interested in becoming a permanent part of the Santa Claus community. At its peak, Santa’s Land boasted several attractions, including a pink children’s train known as ‘the Old 1225’ and a wishing well, although the primary sources of income for the aspiring township were its restaurant’s famed chicken a la North Pole and remailing service, through which customers could have their mail rerouted and postmarked from Santa Claus, AZ during the holidays for a quarter. 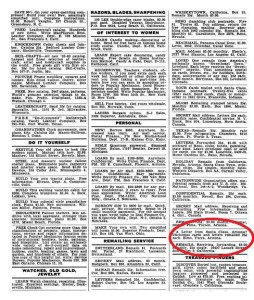 Advertisement inside the December,1961 issue of Popular Mechanics

By the time I arrived at Santa Claus, little remained to indicate that it was once a “destination,” or for that matter, anything at all. Gone was the pink train of yore, the wishing well now filled in, a fitting metaphor for Talbot’s dream town. The Inn and land sales office still remain however, with gaudy, ad hoc signage on the latter arrogantly announcing “THIS IS IT!” – consequentially also summing up my own sentiments regarding this monument to failure.

Mr. and Mrs. Claus having long since vacated the premises, visitors to Santa’s Land are now greeted with barbed wire fencing intermittently punctuated with conspicuous placards warning against trespassing. The giant floodlights out front suggest this warning is hardly taken seriously by the majority of visitors. I look around for someone to speak with regarding Santa Claus’ history of decline which is etched in the sagging marquee of the Santa Land office, but find no one. The junk yard down the road is entirely devoid of activity, the only signs of life in the immediate vicinity being the occasional motorist gunning through the barren desert landscape.

Feeling entirely underwhelmed by Santa Land’s façade, I decide to venture around back to see if I might find more clues as to what led to this ill-fated Arizona town’s demise. In the rear of the facility, I find a non-descript boarded up building, which I can only assume served as Santa Claus’ post office. More promising, I see that some ne’er-do-well had kicked in the back door of the Inn. Climbing inside, I find that the floors have been recarpeted with bird droppings and the entire building seemed to have been repurposed as a party house for Kingman’s degenerates and a drop house for immigrants working their way north. Emptied gallons of water and 30-racks of Nattie Ice litter the floor, tags dating back years are painted upon all available wall space. One stands out in its amazing self-evidence, a floor to ceiling scrawl spelling TRASH, as if to underscore for all future visitors the current state of the building. 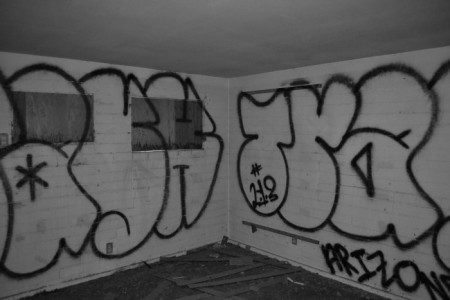 Among the artifacts of the 21st century, one can still find reminders of Santa Land’s idyllic past scattered about the premises. Old elf shoes sit in front of a hearth strewn with debris, the tattered remnants of what appear to be themed costumes can be seen from beneath a layer of dust and plaster. Faded tinsel still frames the doorways in a halfhearted attempt to imbue the place with holiday cheer and discarded signage hints at failed attempts to sell the town.

As it turns out, the town has been sold a number of times. Talbot abandoned her dream for her resort town by 1949 selling it for an unknown sum to the new owner Tony Wilcox. Following the 1960s Santa Claus went into a steep decline and by the 1970s all development of the township ceased, the only business in the town generated by the quickly deteriorating restaurant and a gift shop hocking oil portraits of John Wayne. In 1983, Wilcox unsuccessfully attempted to sell the town for $95,000, turning down an offer of $50,000 believing he was being undersold. Unfortunately for Wilcox, after several years of unsuccessfully attempting to sell the town, he relisted the lot for $52,500 in 1988, once again unsuccessful in his attempt to foist responsibility for the wasteland onto someone else.

Following the restaurant/gift shop’s closure in 1995, Santa Claus has for all intents and purposes been forgotten. At some point it was removed from official Arizona maps, its official population of 10 persons and one buffalo dispersed, as of 2005, all mail sent to Santa Claus, AZ is rerouted to a town in Indiana sharing its name and most of the remaining Christmas themed architecture was auctioned off or stolen. It seems that even the current land owner has given up hope on selling the land, with all of my attempts to contact the current proprietor met with looks of confusion or incredulity. A phone number for the town is listed on Google with no further description, but apparently the line has been disconnected in recent years. 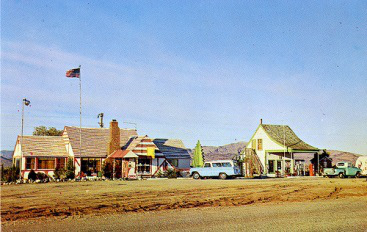 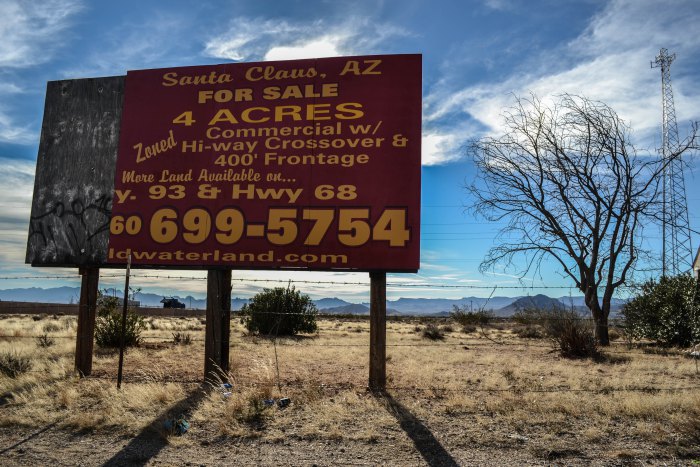 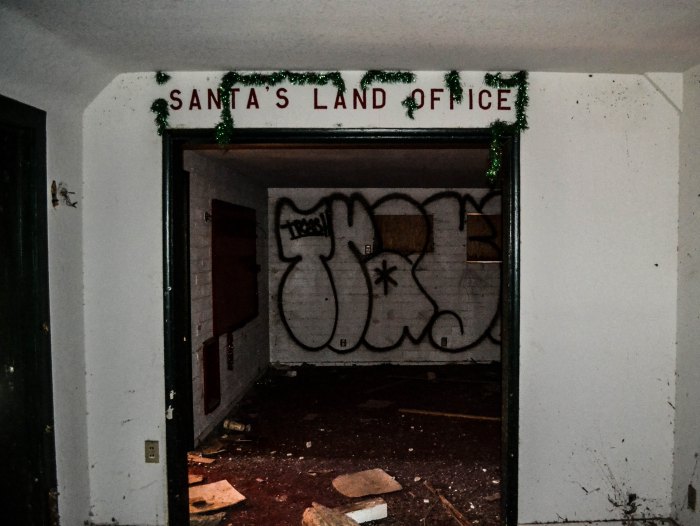 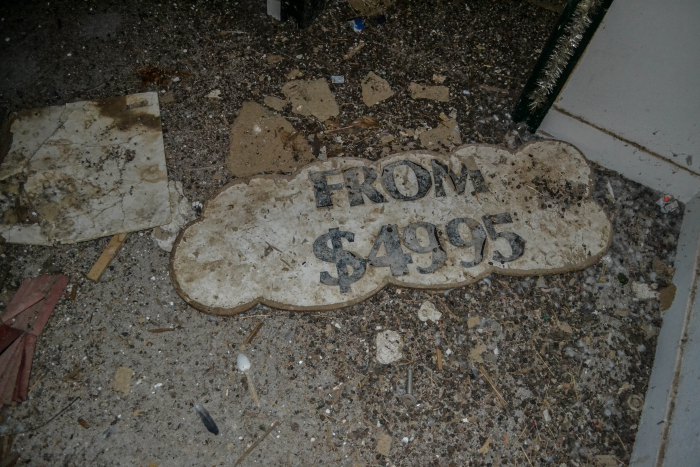 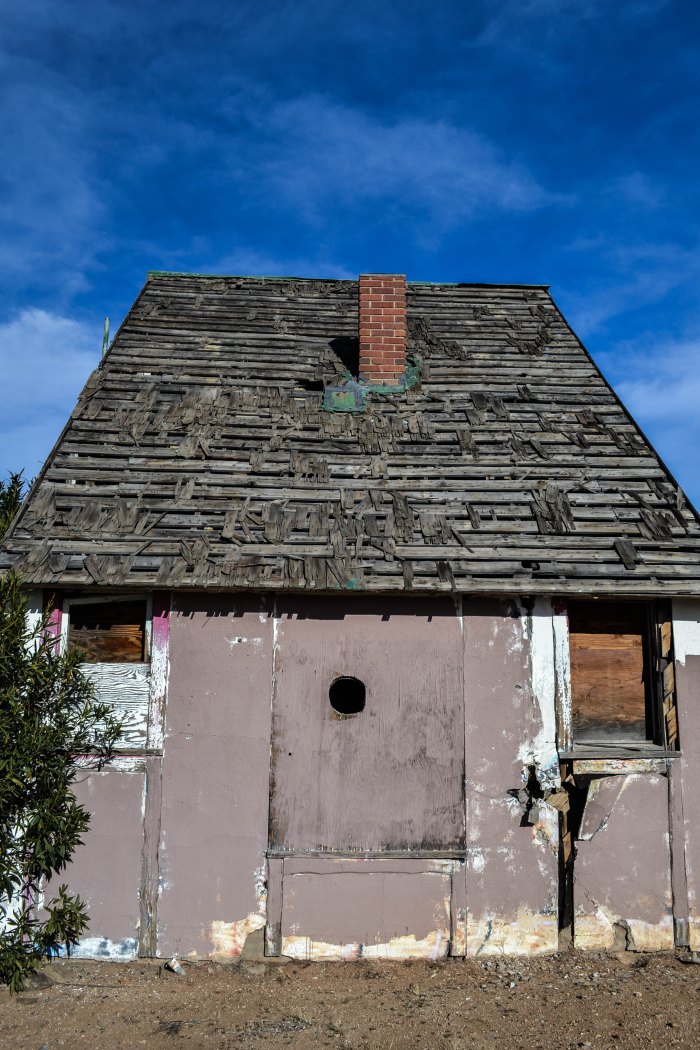 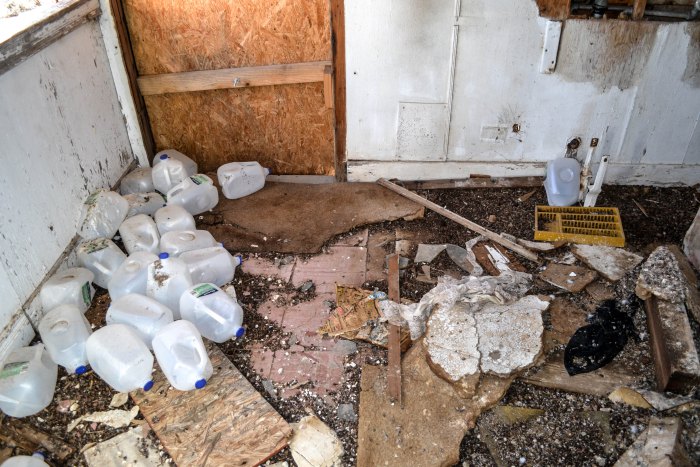 These pictures below are by one of our contributors, Troy Farah, who coincidentally visited Santa Claus in 2008. There was (slightly) less decay at this point. Daniel Oberhaus is a geek and adventurer who currently lives in Delhi, India, where he writes geeky adventure stuff. Here’s his Twitter and his spooky website that has one of those annoying mobile menus that are stuck in the corner.

Previously on Abandoniers!:
Dragonfleye Charter’s Depressing Remains
War Is Hell, And So Was This Deserted Veteran’s Home
The Coke-Fueled, Anarchist Spray Paint Fracas