WikiHole – C’mon Everyone! Let’s Get Castrated! 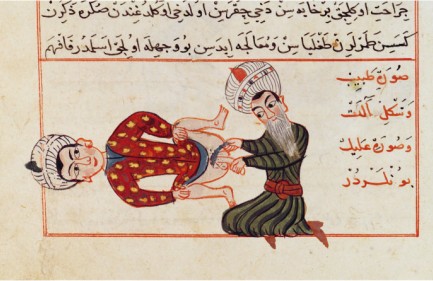 A medical illustration by Sharaf ad-Din depicting an operation for castration, c. 1466 Via Wikipedia

I like junk. Maybe it’s better to say I have a strange fascination with it, a sort of strange obsession. I don’t mean junk like the stuff you find in storage sheds or like the stuff you shoot up, but you know. Junk. Primary sex characteristics. Reproduction is just so damned weird. Isn’t it?

Anyway, when someone links me something junk related, such as Skoptsy, on Wikipedia, I fall into the WikiHole.

Skoptsy is this strange sect from 19th Century Russia that believed castration would make them better Christians. They referenced Matthew 19:12[1] and 18:8-9[2], which details Christ’s counsel of perfection. Y’know, some (not all) Christians cherrypick Bible verses to follow all the time, but these are some of the stranger ones to choose:

It’s quite interesting, actually, because according to this, the Skoptsy believed that when Adam and Eve were expelled from the Garden of Eden for eating the fruit, God affixed the fruit to them. Yeah, the fruit is all up in our bizness. This made us/them mortal, as they had to reproduce like the plants, and it was a physical sign of their sin, etc. Don’t laugh, it totally makes sense.

So, in order to eliminate those pesky human libidos and show penance, they would whack off the attached bits of ‘fruit.’ This meant pretty much anything that ‘hangs’ — for men, that’s ballsacks and for women, that’s boobies.

Now, I’m sure Russian rustics in the centuries leading up to modernization didn’t really know anatomy that well, but I find it strange that they didn’t try to mutilate the poor womenfolk, as do so many other backwards religious cult bastards around the world.

There’s a syndrome named after this! According to the DSM, Skoptic Syndrome is the desire or preoccupation with castration. It seems I’m not the only one: The Heaven’s Gate cult (the ones that suffocated themselves while wearing Nikes) also practiced castration. …And that’s as far as I got down the hole before I decided to get up and put my balls in the microwave.

Read more tomes from the WikiHole:
What Up, Phoenix
Don’t Let The Penis-Faced Saiga Antelope Die From The Sniffles
Get Traumatized Learning About Traumatic Insemination!