Free Will in Ancient Greek Myth 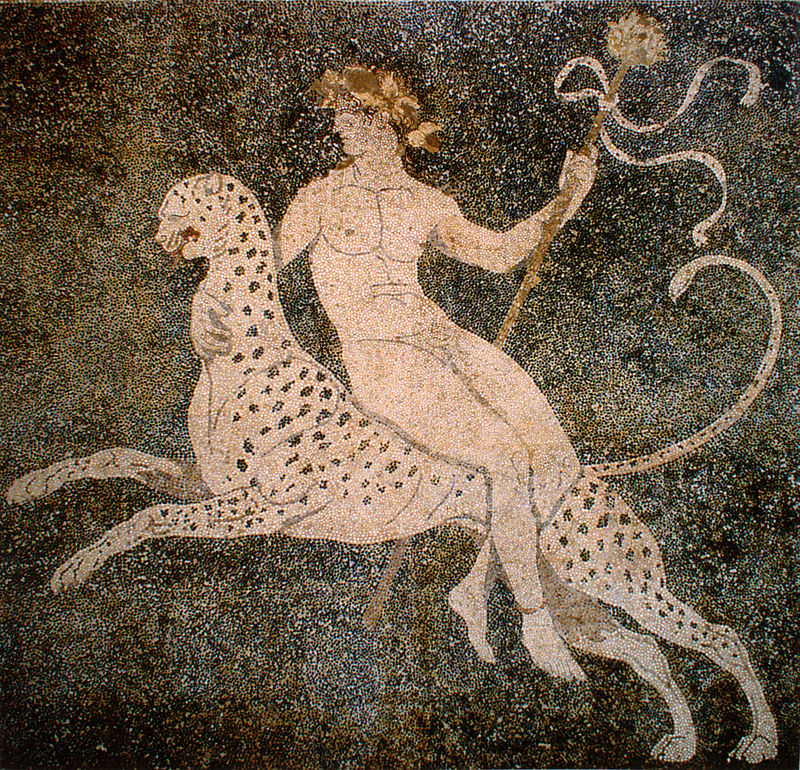 Dionysos Riding a Cheetah, which is metal as fuck // via Wikipedia

In late antique Platonist thought the Gods, as prime individuals, contain the potential character of any God that did, does, or will exist within their own nature, but it is their individual agency that determines which of those potentialities they come to embody.

Ex: Dionysos has the ability within himself to act in the capacity of Apollon and sometimes does (as when the God annually took his brother’s place as the patron of the oracle at Delphi during Apollon’s winter departure for Hyperborea) but crucially he is still Dionysos, acting in an Apollonian fashion. Thus many syncretisms in cultic evidence (i.e. archaeological artifacts, inscriptions, etc) can be interpreted as being directed specifically toward praising one god for acting on behalf of another and in the spirit of the other gods character while respecting the individuality and agency of both gods without reducing them to the function being performed; i.e. Dionysos Apollon when the Dionysos takes the place of Apollon as patron god of the oracle at Delphi.

Another example would be Bactrian Greco-Buddhist depictions of Heracles as a Buddhist Arhat or Buddhist “Saint” and companion of Buddha. Mind you Dionysos and Heracles are still acting within their own natures as well—Dionysos is a god of prophetic inspiration and Hercules as Buddhist Arhat was understood as being not just companion to but protector of Buddha on his travels as well.

All of which is to say that in Platonic thought the metaphysical buck stopped with the primacy of individuality, necessary components of which are agency and differentiation (self-other). This has interesting implications for a theory of free will because it implies that the closer you are to godliness the closer you are to liberation. Not necessarily that you are free now as a mortal. But that through right worship of the gods you may become more free through their divine providence.

Contemporary to this line of thought were the soter cultus of various Greco-Roman deities, including Dionysos, Hekate, among others. A more favorable afterlife could be achieved by being initiated into certain mysteries and thus becoming more deeply devoted to the God to whom the mysteries are dedicated. Rather than being a restless shade always thirsty for a taste of the libations of one’s descendants a soul could bask in the company of their favored God and partake in that God’s sacrifices as part of their patron’s benevolence. Think of it like this: as a mortal there are circumstances beyond one’s control both in life and in death. The way to deal with that is to dedicate oneself to a God, who following Platonist thought, is fully beyond circumstantial constraints and can help their worshipers overcome them as well.

From the Buddhist point of view however humans, animals, plants, and gods are all subject to circumstances beyond one’s control (in the case of gods to a lesser degree). The key innovation in Buddhist cosmotheology is that the most fundamental fact of existence, beyond any deity as a ground of being is change and that if one does not accept this one will be bound to suffering because good or bad nothing lasts forever. Thus a human rebirth was highly desirable compared to an animal rebirth or rebirth as a deity. This is because as a human you exist in a sweet spot of being aware of the problem of suffering (compared to a god who can stands above much of suffering relative to mortals) and able to do something about it (compared to animals who appear to be largely subject to baser instincts without hope of achieving higher sentience in their current form).

To bring all of this back to the conversation on free will:

Yes, the underlying neuroanatomy and brain chemistry is responsible for our conscious awareness. And yes we are largely subject to forces beyond our control both biological as well as natural. But our experiences of ourselves is something which can never be reduced to mere chemicals. Because even though our consciousness is rooted in and emergent from our brains we can change and alter our consciousness and change our experience of life in ways that will, in my opinion, never be accounted for or truly 100% predictable.

And furthermore even in science that which is formally true is often not informally true. I.e. we can say that the scientific theories which underpin physics are the basis for understanding and explaining the theories of chemistry but without the unique contributions of chemists and chemical theories we will never truly, fully understand chemistry based on physics alone. Similarly I believe we will never truly reduce consciousness to the theories of neuroscience. We will always need other theories, subjective ones, rooted in navigating the experience of being conscious in order for our understanding of consciousness to be truly complete – free will included.

Tags: buddhism, dave morris, delunula, dionysos, free will, polytheism
Previous post"Moonlight" Shines Brighter Than The Rest Of 2016's Starlit Films Next postWarren Ellis' "Normal" Is A Mad Trip On A "Speeding Death Kaleidoscope Made Out Of Tits”