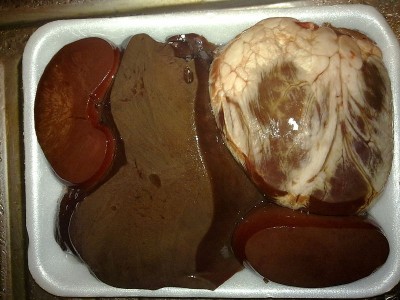 Hello and happy Valentine’s day, fair readers! As we all know, Valentine’s Day is the holiday celebrating rabid commercialism love and romance! And what is the symbol of all this mushy love?

“The heart, of course!” you undoubtedly are thinking right now, “just like it has always been.”

What if I were to tell you, dear reader, that the heart was not always the seat of this most noble of emotions? Skeptical? Buckle up and read on, you reader you, and find out for yourself.

For a very long time in the west, the heart was considered the home of thought as opposed to the brain, which was usually thought to be the home of the emotions. This was changed by that most famous of physicians, Galen. Eventually, Galen decided (after much experimentation) that the heart gave the emotions, the brain gave the reason, and the liver gave the passion. Therefore, it’s perfectly acceptable to show your affection for your boo with whiskey.

This view of organs was held for a very long time, as were Galen’s other views on medicine and his methods of treatment (such as bloodletting). Even though our science is much more modern regarding the subject, 1500+ years of that old and rather incorrect form of anatomy/physiology has left us with the heart being the symbol of romance.

However, the heart takes on a slightly different role in the ancient east. We can see this in the ancient Egyptian culture, where the heart is more or less a physical representation of the soul. Anubis, in a role as a death-judge, would weigh the heart and determine its purity. If it passed, then the owner was free to carry on to the afterlife – but if the heart didn’t pass this test, heart and owner were eaten by a SCARY MONSTER.

The heart as a piece of the soul is also evident in Hebrew culture, and is quite noticeable in the Old Testament. It is for this reason that it is said that God knows the hearts of men – the heart being an analogue of the soul. This influenced the whole romantic heart thing in the west too, obviously.

Moving farther east, we can see the heart meaning the same thing as mentioned above in Sanskrit and the Hindu religion – a sort of resting place of the soul.

Even farther east, in ancient China, the heart was viewed as the soul, and later, as the center of intelligence. This is quite in line with what the ancient peoples of the western world believed. In ancient Greece, thought was supposed to emanate from the torso region. Certain ancient thinkers point to the heart, whereas others mention the diaphragm or guts. This is noticeable in bronze age writings.

So, dear readers, before you commence sqwoobling under the sheets tonight, consider which organ it is exactly that secretes all that love.

Read more tomes from the WikiHole:
WTF Is A Hell Pig?
How to prevent misunderstanding while communicating when stressed[edit]
Don’t Let The Penis-Faced Saiga Antelope Die From The Sniffles
Get Traumatized Learning About Traumatic Insemination!