On Blast: My Girlfriend Was a Punk! 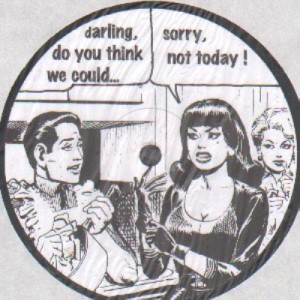 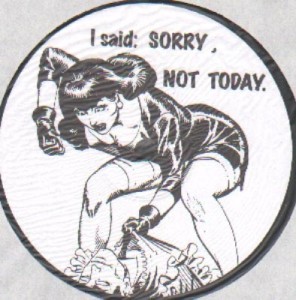 Think about the thing you love the most. Think about how you could corner some poor straggler at a party and talk to them about it for hours without even recognizing how they’re shifting their feet or anxiously staring at their nonexistent wristwatch. Think about how willing you are to abandon social mores just so you have the opportunity to let someone know how violently stoked this thing gets you.

Now think of hordes of people who you’d assume would be your natural allies — people interested in the same thing — attacking you, claiming your excitement was inauthentic, trite, and fabricated in order to impress boys on the internet.

Such has been my life as a woman with a passion for punk, garage, and rock ‘n roll.

When I was in high school, the dude I was dating moved to Israel for nine months. The way I dealt with the crushing devastation of adolescent loneliness was typically 21st Century; I spent a lot of time on the internet. Specifically, I took one of our mutual interests — punk rock — and dove in deep. Every day for nearly a year straight, I spent hours online following message boards and music communities and album reviews and band biopics and links after links after links, making lists and keeping notes and adding albums to my listening queue. I would purchase records I had never heard of, look at the liner notes, and Google the people mentioned to learn more about their musical histories.

I followed each one to the best of my abilities, making loops and turns and abrupt stops and lots of backtracking to add to my collection and get excited about something new.

Even after the nine months was “up,” and my (comparatively speaking) long high-school relationship petered out, my time spent sticking my nose in old business didn’t.

I was confident in my knowledge. I was pretentiously confident in my tastes. I wanted to know more, listen to more, so I began seeking out communities of people interested in the same music. I butted in conversations and started threads and began album trades with people in punk bands across the world. For some reason, most of the people I traded with were in Australia. Australians make really great punk music. Just, you know, by the way.

Upon learning I was female, the majority of people in those communities dipped out on me. Some of the communication breaks were of my own volition, spurred by the 180-degree change in the way these dudes would talk to me. One second, I was the cool internet stranger they wanted to share Wipers B-sides with. The next, I was the mysteriously sexy (HA ahaha) cool internet “not like other girls” girl they wanted so desperately to fuck or date or stalk. Other times, they cut ties with me after berating me for “feigning interest” or “trying to be a know-it-all just to impress boys” or “being fake” or whatever they could say to help rid themselves of any strange insecurities they had about girls knowing as much, if not more, about their favorite thing.

Silly girls! Punk is for boys!

Understandably, I got angry. But ever the internalizer, I just used that anger to fuel my interest further. This time, however, I homed in specifically on the role of women in punk. As much as I could sing the praises of Riot Grrrl and third-wave feminism’s role in the creation of some truly great music, what really made me excited was looking at the women who were doing it first — the women all across the world who have been there since the very beginning, who were kicking mad ass before Kathleen Hanna was in the second grade.

But it wasn’t my interest in women and punk that led me to discover My Girlfriend Was a Punk!: Rare Early Female Punkrockers. Weirdly enough, it was my desire to get better at speaking German.

In high school, instead of taking Spanish, I decided it would be a good idea to brush up on German. My high school didn’t offer German class. I convinced the administration to let me take an independent study through some accredited source that would send me a binder of printed German exercises I would complete at my leisure.

Surprising no one, the lessons were a total bust. Being in northern Arizona and surrounded by zero German speakers, I turned to the only source that could help me with my pronunciation and fluency without  making me want to drool into a paper cup: Music.

I forget how I stumbled upon them, but I was soon listening to a  1979 7” by a Swiss, female-fronted punk band called Glueams. In particular, I really latched onto this song, “365.”

About three mouse clicks later, I owned the fantastic compilation on which “365” is featured: My Girlfriend Was a Punk! Check out that cover. God, it’s so good. 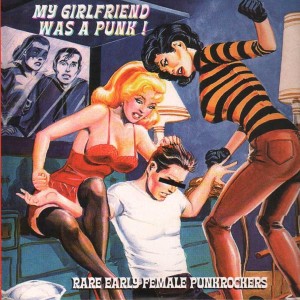 This is one of those rare instances in which I know absolutely nothing about the album. I don’t believe it was released on any particular label. I don’t know when it was released, or by whom, or how they compiled the tracklist, or any of that good stuff.

All I know is that it features 17 songs released from 1977 to 1982. These songs were recorded by different female punk bands from… Let’s see, there are songs from the US, the UK, Canada, Sweden, France, Denmark, Italy, and of course, Switzerland.

I really dig this one, by French girls Anouschka et les Prives. It kind of reminds me of X-Ray Spex and Redd Kross combined.

I laugh every time I listen to, “I Gave My Punk Jacket to Rickie” by Mary Monday. I had to learn more about her, but unfortunately, there wasn’t much to learn. She’s pretty mysterious. On the bright side, mystery makes for the best stories. Here’s a little bio HoZac put together, if your curiosity is piqued.

And even though this song may be better classified as new wave, and even though it kind of of reminds me of that one awful song, “Turning Japanese,” the use of synths paired with her upturned vocals also remind me of The Okmoniks, which is a much better thing to be reminded of:

Honestly, I could link you to every single song on the album. They’re all great. But I have to choose a stopping point here, and I think I’ll end with Toronto’s 1978 punk love, Tyranna.

It’s 2015 and misogyny is still rampant. Each woman has their own way of rising above the tired rhetoric of childish men, and mine happens to be listening to punk. A part of me still feels a bit cowardly — after all, these women I’m listening to were doin’ it 40 years ago, and I’m just sitting here passively absorbing their power.

But for every overhead pop song I hear throughout the week that encourages women to sit down, strip down, and bow down, I’m comforted by the fact that I can go to my record collection and pick out any number of songs that reaffirm, “Fuck. That.”

Tags: but the point i'm trying to make here is that women are awesome, fuck you, girl power, girl punk, guys and non-binary people are cool too because i am an intersectional feminist, my girlfriend was a punk, punk, riot grrrl
Previous postEthanol Dossier- Infusion, Round 2! Next postEthanol Dossier -- Cold Drinks from a Cold Man