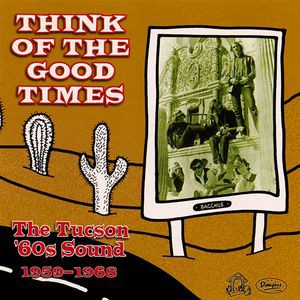 On the real, though, I learn so much about music every day. And since I’ve expanded my music collection to include the entire world, I feel like the more I learn, the less I know. I can easily get into a research hole about one band and spend the entire day making weird connections until I feel like my brain is about to short circuit. You know what I’m talking about. Don’t act like you’ve never Googled, “fibromyalgia” and then somehow ended on the Wikipedia page for that swastika made of yellow trees in the otherwise green forests of Prenzlau, Germany.

I suppose what I’m trying to say is that I’ve spent so much time obsessing over the music of foreign countries that I’ve neglected to dig into my own backyard.

So, today, let’s talk about Tucson.

Tucson is a weird place, a sanctuary for equally weird desert rats who presumably want the comforts of a city but prefer a certain level of isolation. And wouldn’t ya know it, a lot of the people who fall within that category happen to be musicians! I started sensing that Tucson was a special place for music when I noticed that some of my favorite bands would noticeably skip out on a Phoenix date, instead opting for a stop in Tucson along their western tour circuits. It made sense, as I later learned that some of those aforementioned favorite bands actually started in Tucson.

Several years back, I nabbed bootlegs of “Acid Dreams Testament: 75 Minutes of Psychotic Terror” and “Acid Dreams Epitaph: 69 Minutes of Green Fuz,” two rad collections inspired by the original Acid Dreams compilation put out by a German record shop owner who took a cue from Elektra’s Nuggets series. In the middle of my 69 minutes of green fuz, this song came on and I couldn’t get it out of my head. Probably listened to it seven times in a row.

Long story short, I learned these dudes were from Tucson, and it led me to look into their releases, which led me to “Think of the Good Times: The Tucson ‘60s Sound 1959-1968.” This comp was released by Bacchus Archives, a sub-label of Dionysus Records.

Dionysus started as an extension of the tape-only label of the Roads to Moscow record shop in Tucson that was active around 1981-1983. Founder Lee Joseph skipped town to LA in ‘84, where he officially began Dionysus with the help of Suzy and Greg from Bomp! records. What the fuck, man. Bomp! is one of my all-time favorite labels, with a catalog that includes stuff from The Stooges, Dead Boys, Spacemen 3, Black Lips, the Brian Jonestown Massacre, The Nerves… Get outta town. That’s so cool. For how expansive and overwhelming music is, it ends up surprising you in really neat ways.

Here are a few tracks from “Think of the Good Times” that I’m really, really diggin’ on:

Another jam from The Grodes, who went by The Tongues of Truth at the time. Bacchus Archives actually released an earlier Grodes-heavy Tucson comp that takes on this song’s namesake.

I’m not particularly in love with this song, but it’s fun to note that it appears on the fifth volume of one of my favorite series, Girls in the Garage. Another rad 60s group I had listened to a few years prior without realizing that they grew out of Tucson! I feel like Tucson has a lot more secrets I have to uncover.

As is customary, I saved the best for last. This song is not only the best track on the album, but it comes from a band that has the most interesting and tragic backstory out of any. 1:49 is the perfect length for this song, because it’s crazy good start-to-finish and never drags. I can’t get enough of it.

These guys originally started as a band called The Intruders, but soon evolved into The Dearly Beloved with a lineup comprised of Tom Walker, Terry Lee, Shep Cooke, Rick Mellinger (who used to play drums for The Grodes!) and Larry Cox. Because of their ability to do both Beatles AND Stones (that is — be loud and gnarly and gross, but also play with finesse and technique), they became a pretty big deal in Tucson. DJ Frank Kalil, who ran Tucson’s legendary radio station KTKT, apparently had a soft spot for local acts, and squeezed them into his rock’n roll playlists whenever he could. And the people loved it!

Soon, another well-known radio dude, Dan Gates, got in touch with the band and tried to steer them into a poppier direction. They begrudgingly obliged, despite the fact that the entire band thought the song Gates wanted to record, “Peep Peep Pop Pop,” was super lame. It kinda was.

But Columbia Records really dug it. They dug it enough to release the single, and pretty soon it was #1 on KTKT in Tucson. It beat out The Beatles. If you know any older people who were living in Tucson at the time and listened to rock ‘n roll, seriously ask them about The Dearly Beloved. My guess is that they’ll be flooded with memories of decades past, and they’ll have a lot to say about ‘em.

The Dearly Beloved was enjoying its popularity. The band showed a lot of potential, a lot of promise. But after a while, the deal with Columbia was beginning to turn sour, and they wanted out of the contract. At the time, they had just finished a date in Dallas, and wanted to drive into LA to meet up with Columbia to hash it out, play a few shows on July 1 and 2, 1967, and hopefully negotiate a deal with a new label.

Because I haven’t actually talked to any of the members (and they’ve been understandably quiet about the whole ordeal), I’ll only write what I know:

After a few very long, sleep-deprived days on the road, The Dearly Beloved was desperately trying to get back to Tucson in time for Larry Cox’s wedding on July 4. Cooke was driving on the highway near Yuma when he fell asleep at the wheel. It flipped. Most everyone except Cooke was badly injured. Cox died at the scene.

The band ended. The tragedy was too much to bear, and the members felt that Cox was irreplaceable, and that was that.

I came across a 2012 Arizona Daily Star article that profiled Rick Mellinger and his life since the crash. Apparently, the time that he spent in physical therapy ignited a new passion — In 1968, he landed a job at St. Joseph’s physical therapy department. He later became the director of respiratory therapy at the University of Arizona Medical Center, where he stayed for 13 years. He now works for a company that provides medical equipment for home care. And according to the article, he’s “absolutely ecstatic about [his] life turned out.” Well, dang!

The article also noted that in 2005, the Lees (former bandmate Terry Lee and his wife, Lil) saw Mellinger playing drums in a praise band at Catalina Foothills Church. They reconnected, brought in a new singer named Mike Cooke (no relation to Shep), and played a few shows as The Dearly Beloved in Tucson, until – get this – Cooke died after being mauled by his dog.

Next week I’ll be dipping my toes into heavy metal, a genre that I’m admittedly clueless about, to show you a crazy proto-heavy metal/blues album from early 1970s Argentina!

Tags: delunula, doonoola, review, tucson is kewl
Previous postAbandoniers! -- The Night Climbers Of Cambridge Next postEulogy For Your Internet Fame