When I wrote my first column here, I promised that the majority of stuff I’d post would be somewhat in the realm of old garage, blues, rock ‘n roll, or surf. But I also wrote that I couldn’t guarantee that I wouldn’t toss something completely unrelated into the mix. Today, I’m here to deliver that. Get ready for some Tuvan throat singing. 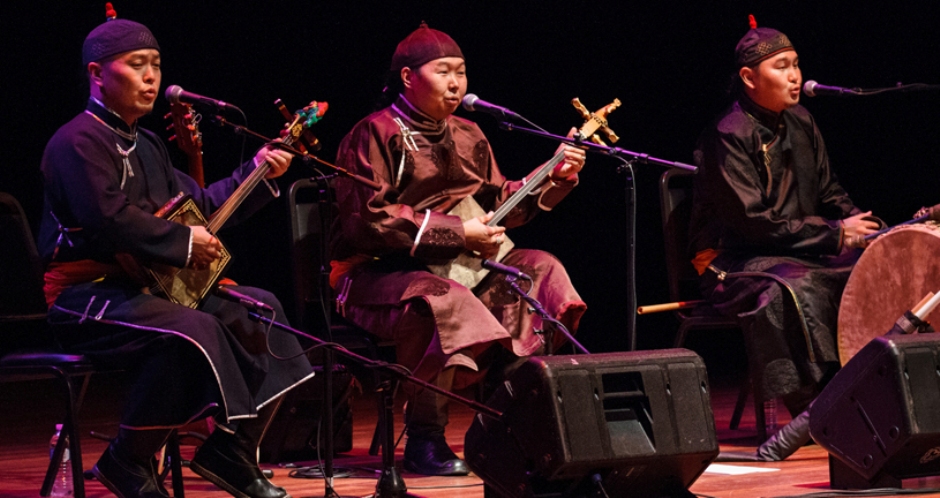 Alash Ensemble: Cooler Than You

I have a soft spot for folk music. Not, like, Bob Dylan/singer-songwriter/”Look I have a banjo and am wearing a tweed vest in 2012” folk music, but folk in the most basic and traditional sense of the word – the music that has more of an oral history, the music that’s native to regional communities, the music that people would still be playing if cultural transmission wasn’t a thing and popular music never crept into all corners of the world.

My mama was careful to teach me that the sounds created in America are in no way reflective of the sounds that are created around the rest of the world. The result was a childhood steeped in “world music” (though that term is iffy). The foundation was laid early on, but when I started studying geography, my interest in regional folk music exploded.

I probably annoyed a lot of my friends. On more than one occasion, my boyfriend has given me blank stares as I’ve sat and listened to silk-and-bamboo ensembles while trying to hide the fact that I was basically crying. Shit’s beautiful, dude. Highly recommended. Not for parties, though.

For the uninitiated, throat singing is essentially a kind overtone singing in which you make a fundamental pitch, usually a deep and constant sound, then you sing over that tone with lighter pitch that sounds almost like whistling.

Here’s a video of a German girl explaining it (and doing it) better than I can!

Some of my favorite folk music comes from east-central Asia, right where Mongolia and Siberian Russia get cozy with each other. This region, particularly around the Tuva and Altai Republics, is where throat singing originated. Even though this song was released in 1994, here’s a rad example of what traditional Tuvan throat singing sounds like. It’s also just a really fun song that I’m super into. I listen to this an embarrassing number of times during any given work-week.

Here are some reactions I’ve received when I’ve shown this to people:

My responses are usually as follows:

You know, I get it. It sounds weird. If I started dating someone new and we were talking about music we were into, I wouldn’t immediately lead him to throat singing. It’s an acquired taste, but once you’ve gotten used to the sound profile of throat singing, it’s easier to find it more than just a novelty.

This song, for example, is genuinely one of the most beautiful songs I’ve ever heard. It’s simple, haunting, and every time I listen to it, I find myself stuck in my tracks, unable to function until the song is over.

Although some people disagree with me on this, I think throat singing can actually be pretty versatile. Aside from the traditional folk music of central Asia, it lends itself pretty  well to modern bluegrass and blues stylings.

No fuckin’ way. Bela Fleck managed to squeeze Tuvan throat singing — more specifically, the Alash Ensemble — into a bluegrass rendition of, “Jingle Bells.” How can anyone dislike this? I’ll listen to this song in June.

As cool as that song is, I don’t think it even compares to “Good Horses.” I found this song through this fantastic documentary called Genghis Blues. It follows blind American blues musician Paul Pena as he makes his way into Tuva to learn about, and compete in, a Tuvan throat singing contest. The way he blends that blues guitar with traditional Tuvan music, man, it’s just… Totally unexpected. I love listening to collaborations like this, because it’s nothing I could’ve ever thought of. Metal/pop crossovers are tired and cliche, electronic/folk collaborations are predictable and shitty, but blues/Tuvan throat singing? Who else would’ve ever thought of that?

Now I’m just thinking of all the blues songs I love that could be enhanced with a bit of Tuva. I think this one would sound dope with some good ol’ fashioned throat singin’:

[Side note: Blind Boy Paxton is a blind, 25-year-old blues prodigy from LA. FROM FUCKING LOS ANGELES. HE’S BASICALLY  MY AGE, FROM L.A., AND HE IS MAKING MUSIC LIKE THIS. Shit.]

I’m gonna wrap things up now. At this point, you’re either into it or you’re not. If you’re not feeling throat singing, seek out traditional folk music from other parts of the world to see what you do like, because having that expanded musical repertoire really does make your life so much easier to enjoy. You’ll always have something to listen to for every mood. You’ll never be bored of your music collection ever again.

If you’re curious about learning more about the music of the world, I cannot say it enough times: Go to the Musical Instrument Museum. If you live in Arizona and you haven’t yet visited the MIM, who the fuck even are you? Go. It’s worth the admission price, and then some. The museum is divided by continents, and within each “continental” room, you travel each country, looking at the instruments of, and listening to the music of, literally every country in the world. There are also rad exhibits – the first time I ever visited, there was a traveling exhibit of Latino and Hispanic Punk Rock 1977-1983. Just sayin’.

Anyway, I think one of the best ways to discover an appreciation for throat singing is to try to do it yourself. Seriously, next time you’re in alone in your car, try to make your vocal cords make two sounds at once. Try and push out a baseline tone, while you “sing” in a high pitch.

Let me know how that works out for ya.

Previously on On Blast:
My Girlfriend Was a Punk!
Your Favorite Music Wouldn’t Exist Without This Music
Native North America
Thai Pop Spectacular