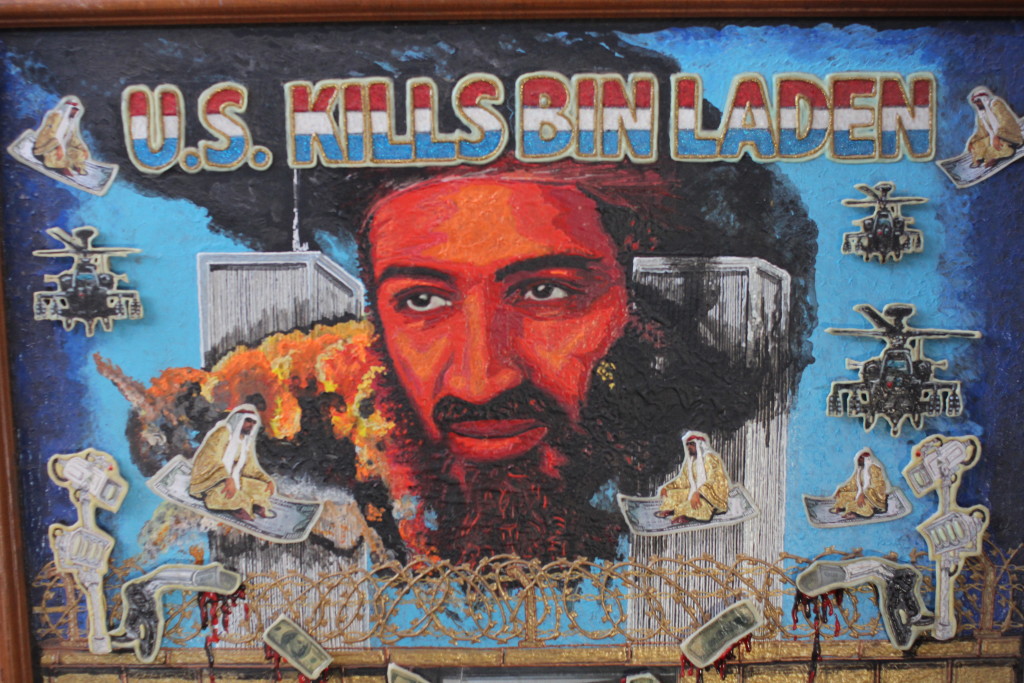 All photos by Troy Farah

Painting was one of the few things Dean Chetwynd’s parents couldn’t beat out of him, he tells me. My friends and I had just happened to be wandering around the streets of Cottonwood, Arizona (population: 11,000), when we happened upon Chetwynd’s back alley art gallery just off Main Street.

At once unsettling and immersive, Chetwynd’s strange style is a bizarre blend of Frank Frazetta with Hieronymus Bosch via an InfoWars nightmare. Using craft store fabric paints, he creates intricate, grotesque scenes depicting conspiracy theories, apocalyptic doomsday scenarios, and current events. Nothing, not even the Statue of Liberty wearing a gas mask or horses breathing fire or the word ‘Messiah’ in Metallica font, is too strange for Mr. Chetwynd. 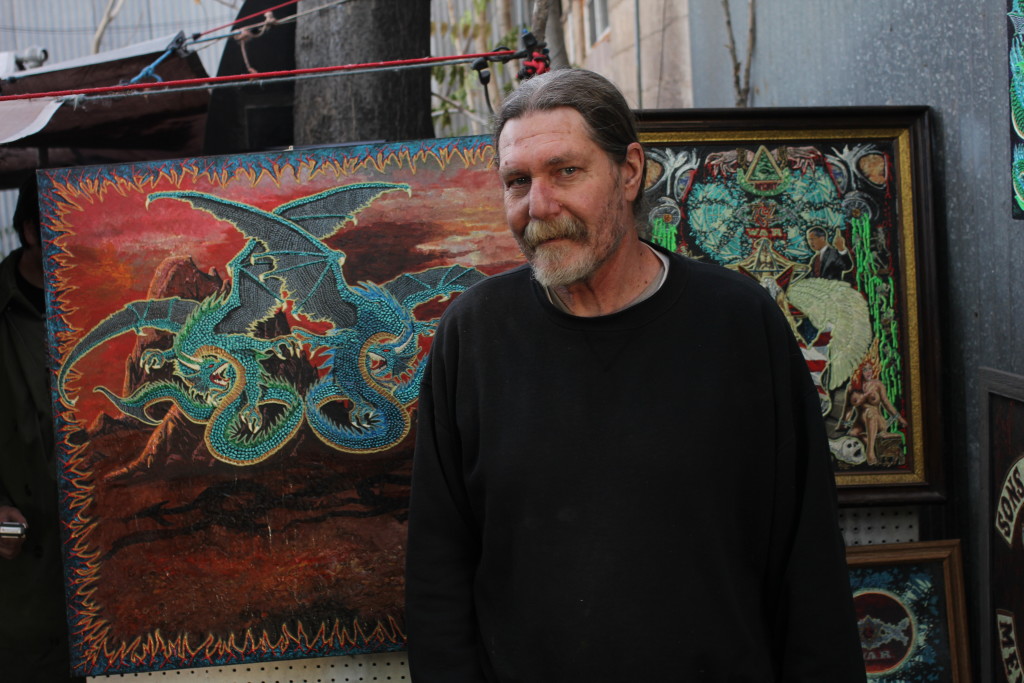 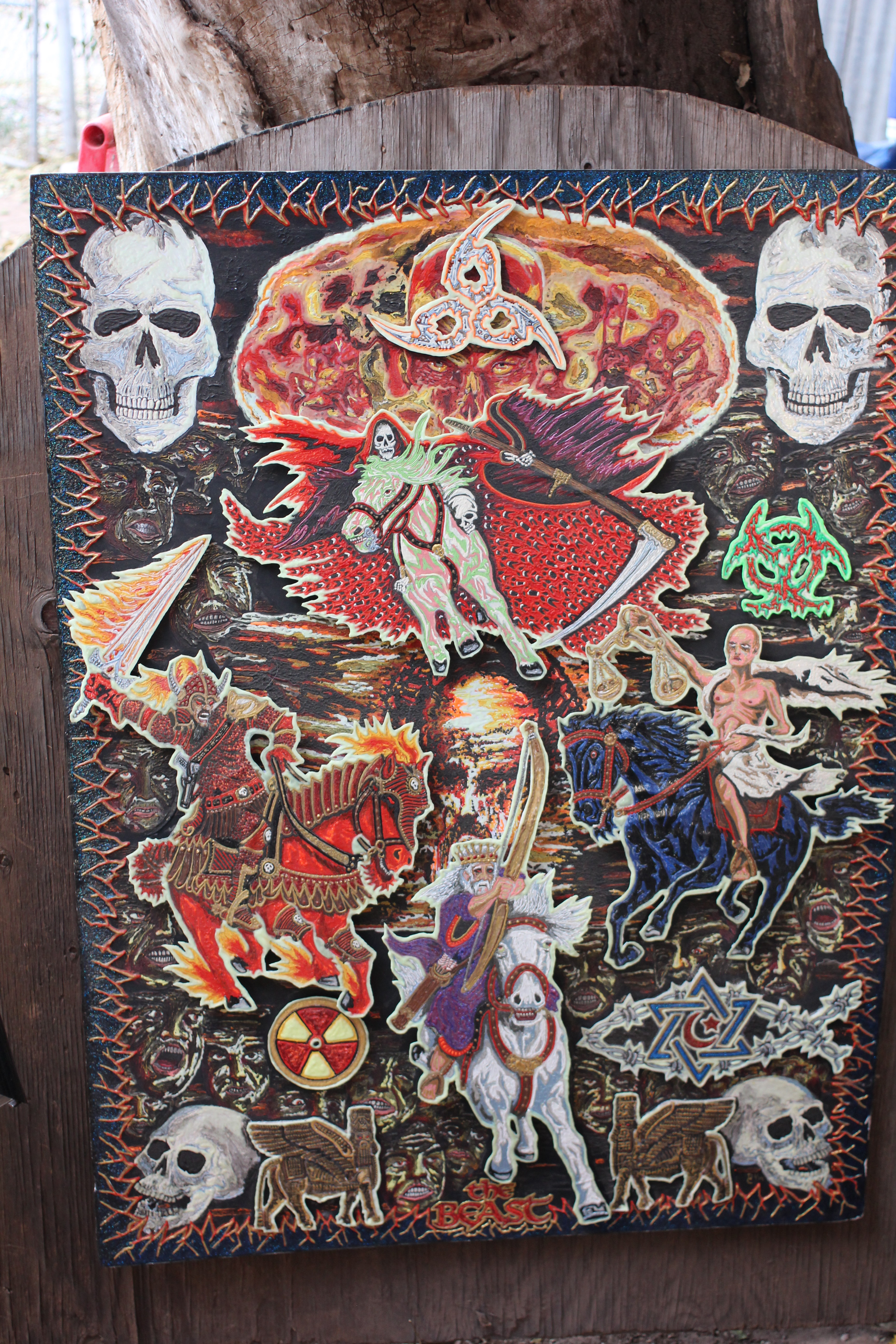 “What I do is, I call it collective imaging,” Chetwynd tells me. “I take images from magazines, papers and headlines and they just form this tapestry of what I call apocalyptic artwork.”

Chetwynd goes on to say his art is a reflection of spiritual warfare in the world. He says he started seeing patterns in history after the Branch Davidian compound was burned to the ground in Waco, Texas in 1993. So what patterns was he seeing? 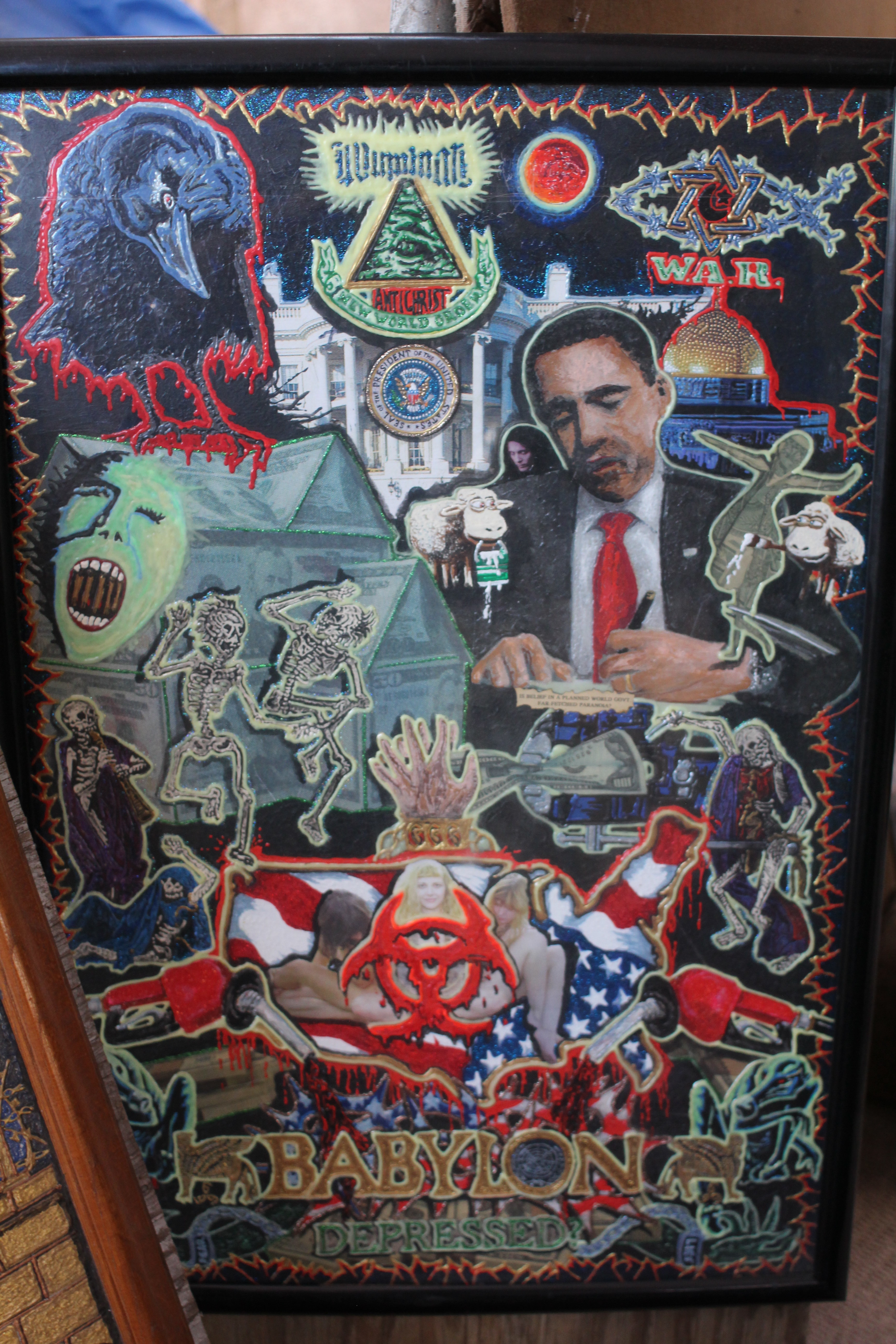 “Just the gradual enslavement of mankind, not only to materialism, but to technology,” Chetwynd says. “I saw the advancement of a power elite that was controlling more of global affairs than national affairs. So I started putting the pieces together.

“Some people call it Illuminati conspiracy, the Bible calls it Ephesians 6:12. It says, ‘Our war is not against flesh and blood, but against principalities and powers and wicked spirits in high places.’ So this is spiritual warfare and my work just brings out the fleshly part of that.” 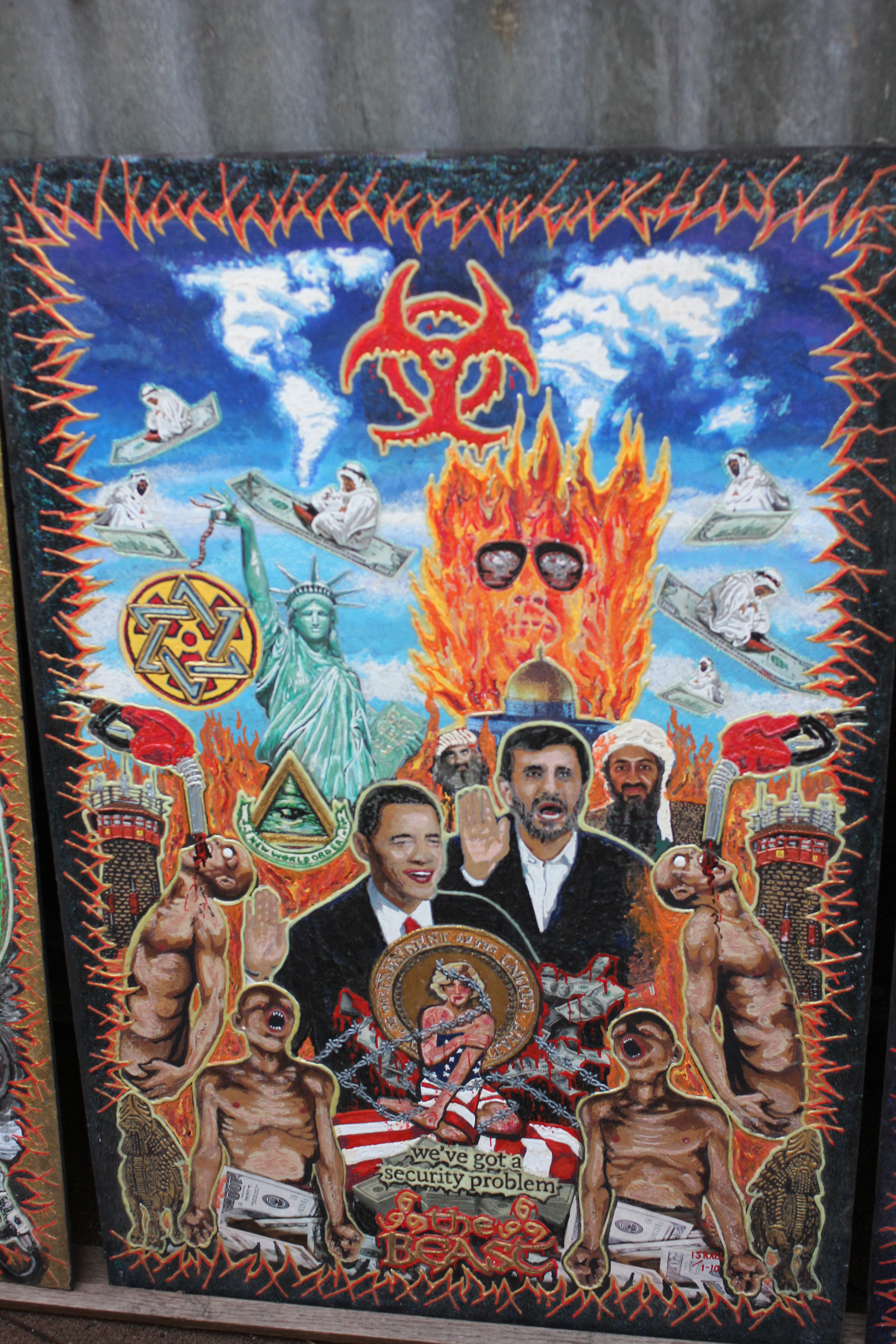 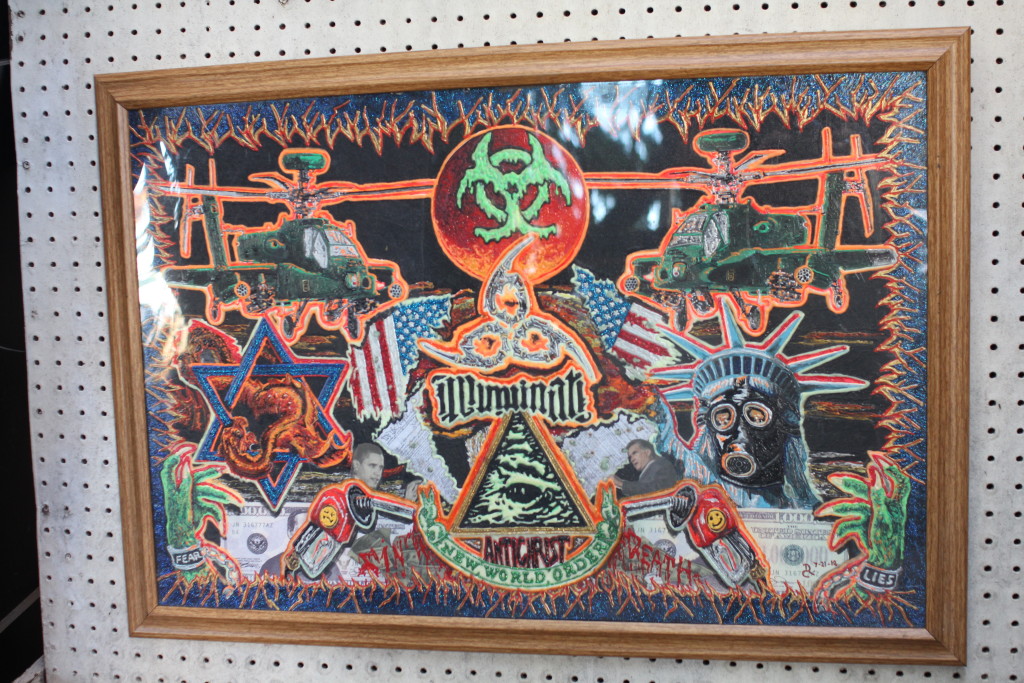 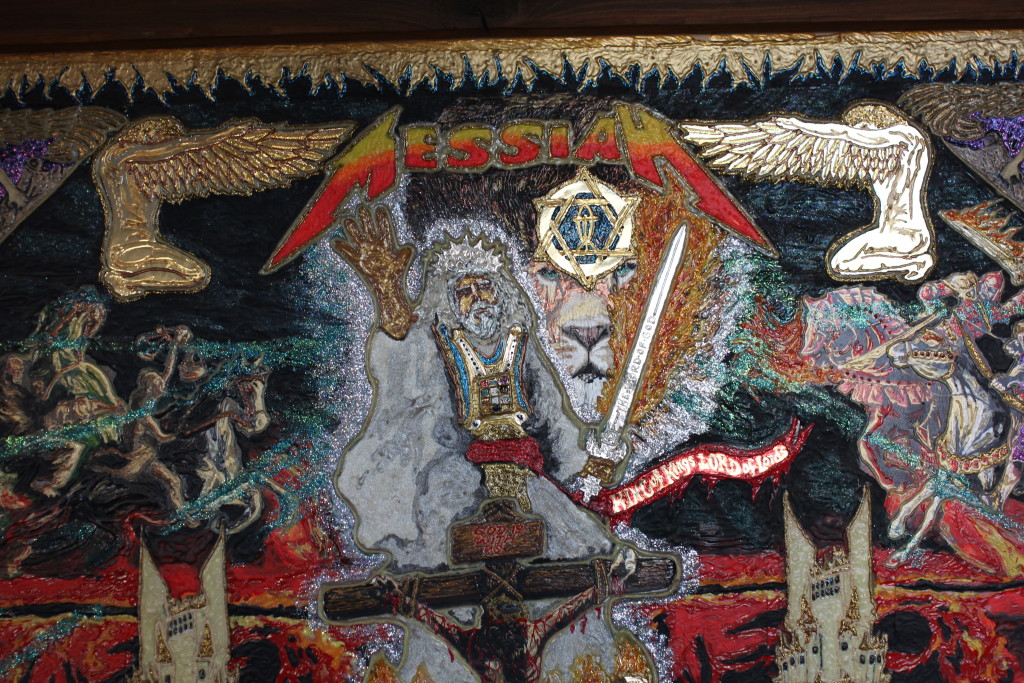 While Chetwynd’s worldview is, to say the least, unconventional, there’s little doubt that he’s a talent that pays closer attention to global headlines than most. Whether or not one can find accord with his outlandish beliefs, his intricate technique and unique perspective are arresting. Stylistically, it falls somewhere between ‘80s black light posters and cover for thrash metal bands with a level of detail on par with Christy Karacas.

“Frank Frazetta was one of my favorites,” Dean says. “Boris Vallejo, all that cool Molly Hatchet-looking warriors, Conan comic books.” 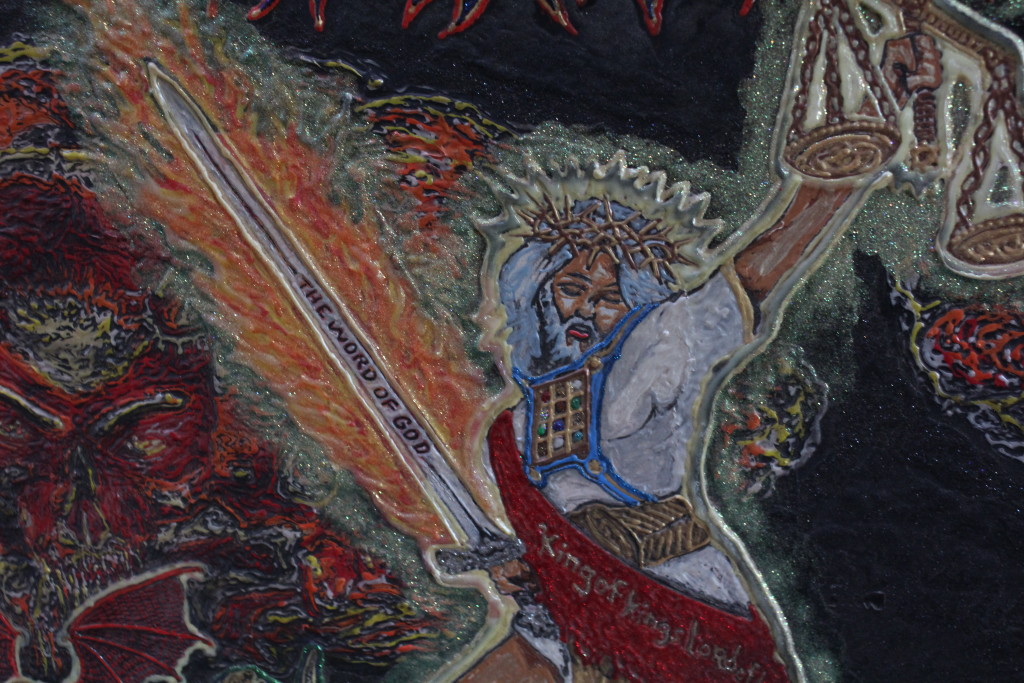 His influences certainly show through. There’s the fiery skull of Lucifer emerging from a mushroom cloud painted on a surfboard, aptly titled Surfin’ With The Lord or the angels of death spraying gasoline on a flaming stack of Benjamins or the seven-headed beast with the Eye of Providence from the dollar bill. On another, a woman (who suspiciously resembles Britney Spears performing “I’m a Slave 4 U,” complete with Burmese Python) dances on the One Ring from The Lord of the Rings in a field scattered with skulls and religious icons.

And, I’m told, there are stacks more of these kinds of paintings in the house. This is just the tip of the iceberg. 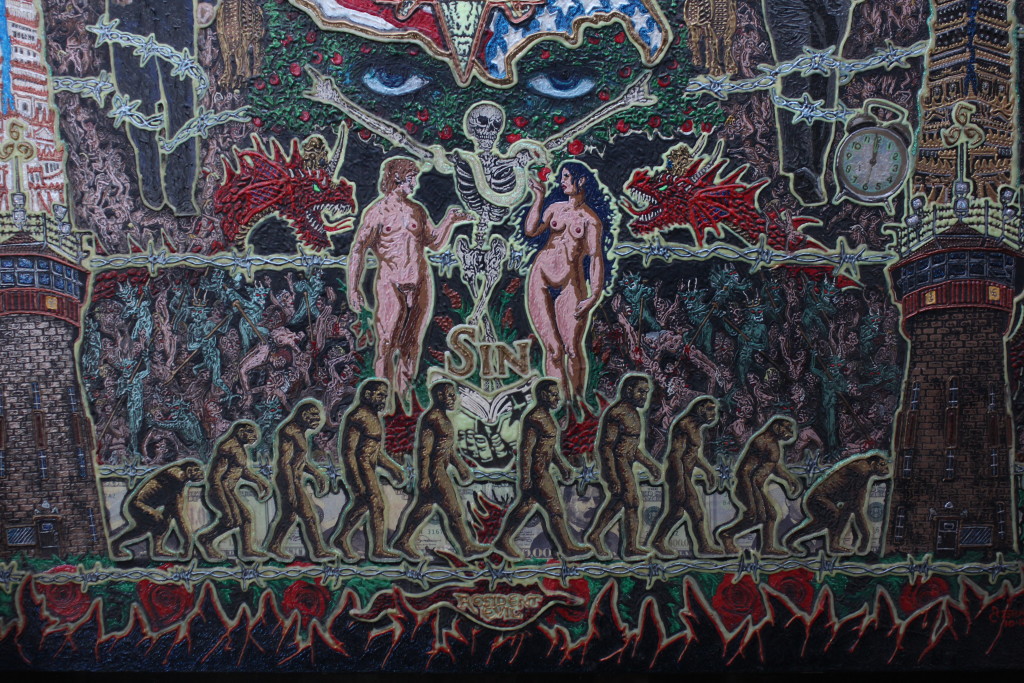 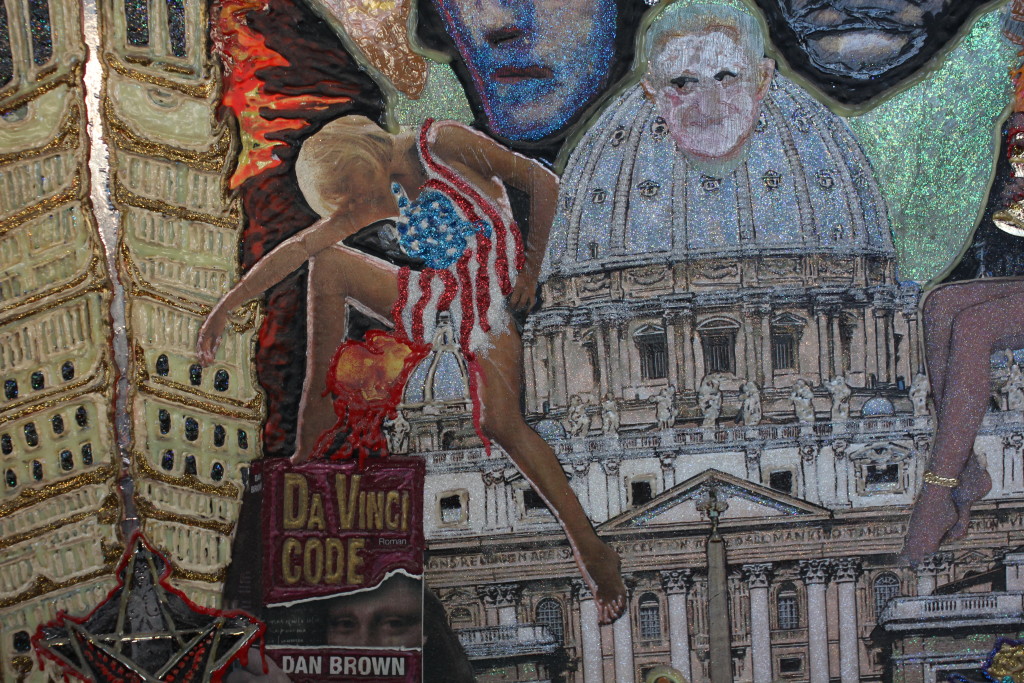 Chetwynd tells me he was born in England, but was raised in California. After hitchhiking around America for a few years, he settled in the town of Cottonwood, a sleepy province in the high deserts of Yavapai County.

“I love Cottonwood. I haven’t talked to a cop in fourteen years,” Chetwynd grins, laughing. “This is a great town for me.” After he hurt his back, selling these paintings to passersby on Main Street became his full-time gig. Despite being paranoid of world government, Chetwynd is fine telling me all of his theories and personal history, but says the last time a story was published on him, he discovered he had a long lost son.

A little online digging reveals Chetwynd is telling the truth. The man doesn’t have much of an internet presence as it is, but one of the few things that turns up is a blog from 2009 about the artist. In the comments, someone posting as “Jaime” describes a “father… which I have never met. His name was Dean Richard Chetwynd. This photo may possibly be of him.” Despite the inherent darkness that spreads from his id onto canvas, Chetwynd seems incredibly laid back and down-to-earth. He doesn’t even seem particularly worried if these predictions come true.

“It kinda makes sense after a while when everybody’s in confusion,” Chetwynd explains. “They’ll be asking all kinds of questions [like] ‘What’s going on man? How come you’re not freaking out?’

Regarding the future of humanity, Chetwynd says he hopes he’s wrong, but encourages others to do their homework.

“Study everything you can get your ol’ hands on and trust [that] the Bible will lead you into the truth,” Chetwynd says. “As long as there’s breath, there’s hope.”

Tags: art, dean chetwynd, deluna, delunula, post-apocalyptic nightmares, someone has too much time on their hands, the end is nigh so let's get high, troy farah
Previous postExclusive: Excerpts from Troy Farah's New Zine, 'Lilliputian.' Next postOn Blast: Tuvan Throat Singing