Phoenix Has Its Own Superhero And He’s Totally Awesome. 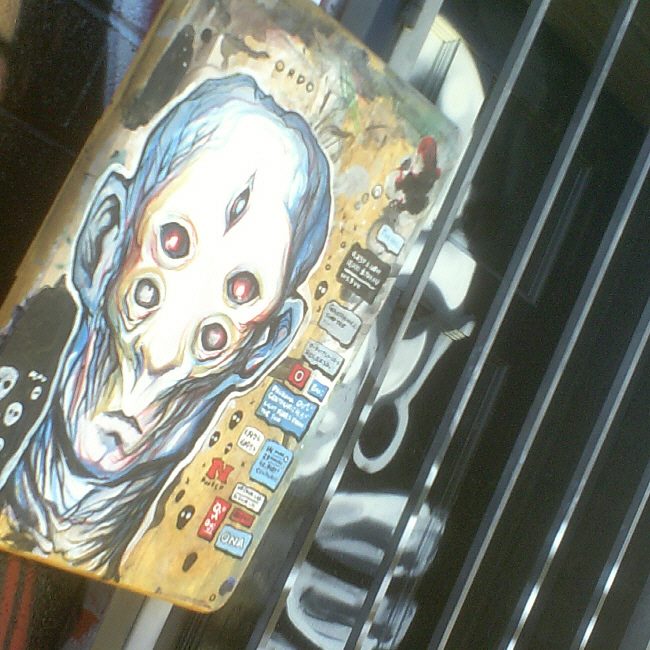 James B. Hunt is a freak and Phoenix loves him for it. The 42 year old L.A. transplant dresses in all black and refuses to be photographed. He wears a mask when he paints live to hide his identity. He will shoot dagger eyes at you if you try to take his picture without telling him. He rides a bicycle covered in every sticker known to man for crazy long distances and hides his art all over Phoenix. His art hunts are what he is most known for.

He carries a bull whip in his bike basket. If you are a car and you come close to hitting him, watch out. He might whip you. It’s been known to happen. When asked why he carries it, he responds “I use it to fight crime”. Crimefighting to James means whipping the cars who almost run him over.

He is better known by his alter ego NXOEED. When asked how he pronounces it, he says he doesn’t. He leaves it up to the public and accepts all pronunciations. 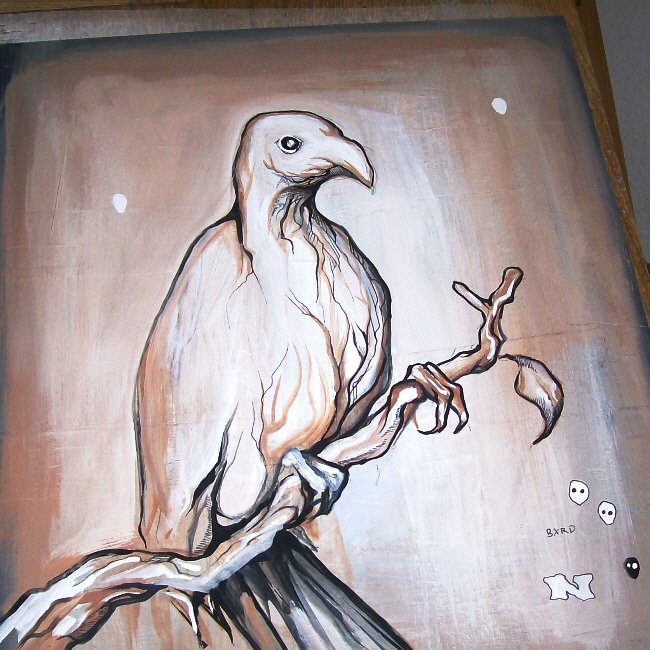 From the 23 Birds for Tempe hunt.

He’s been an active part of the Phoenix art scene for over 20 years and started hiding his art in the late 1990’s. He says he got bored with the way things were done and started looking for more interesting ways of doing art shows. The earliest ones involved a plastic toy horse he repainted and carried around with him on a tiny leash. He called it the Three Inch Horse. He hid it around downtown Phoenix during First Fridays between 1998 and 2002. He just liked the idea of it being out there for people to find. He wouldn’t tell them that he hid it but he would promote it with posters and stickers. The posters were black and white drawings of the horse with SUPPORT AND PROMOTE THE THREE INCH HORSE in block lettering. He did it as part of a social experiment under the name NTN Global Systems, an arts collective designed to look like a mock corporation he co-founded in the late 90’s with Lawrence Hearn, a local musician and long-time partner in crime.

Nobody ever found it. When asked where the horse is today, he says he gave it to his daughter. 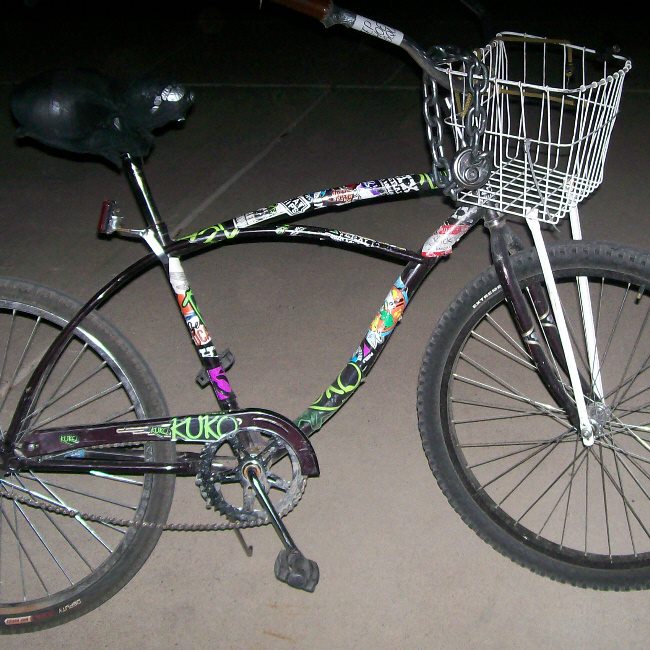 It wasn’t long after that he started hiding art that he actually wanted people to find. He was inspired by his trips into the desert where he would find things like animal skulls and warped pieces of glass. He hid a painting one day and posted a picture of it on AZpunk.com, a website devoted to local punk rock that he helped moderate.

“It was found within minutes” he says.

He kept the hunt going and has been doing it ever since.

Recent years have seen a spike in interest in his work among the people of Phoenix. More people are hunting for his art now than ever before. He says he is followed all the time by people who hope he’s out hiding something. But there are some who don’t like what he’s doing. Every hero has a villain. He has unwittingly become the father to a hidden art micro movement in Tempe and Phoenix. There are the rape dolls which appeared during his 23 Birds For Tempe hunt in February, he says he had nothing to do with them and doesn’t know how they got there. There are the bird balloons. There is the NO NXO graffiti tag that shows up near many of the paintings he hides. But weirdest of all is a guy who calls himself David Syndrome, who actually goes out of his way to destroy Hunt’s work if he can find it before anybody else does. Syndrome was interviewed in VICE earlier this year and actually said he considers the destruction of Hunt’s work a “cleansing.”

When asked if any of this bothers him, James says he doesn’t mind it at all. He loves it. 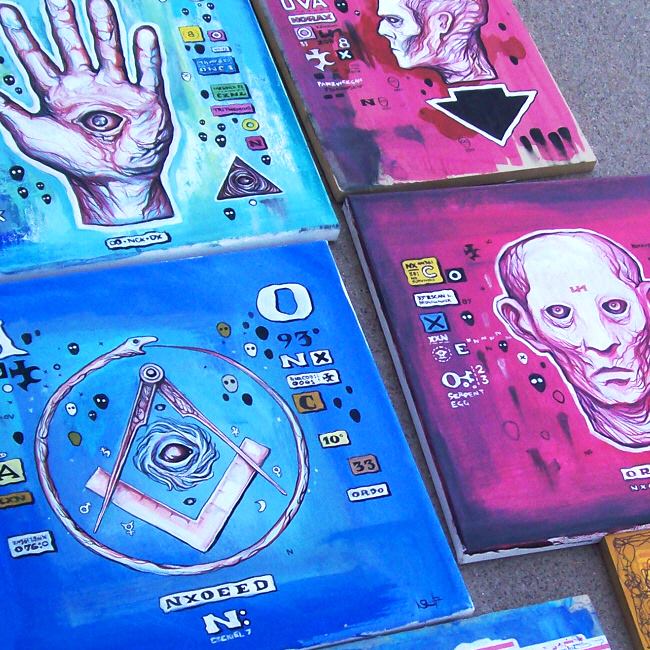 “Some people just seem to hate me for it. If you find a painting near one of my flyers, there’s a 30-40 percent chance that it’s been destroyed. I get messages from people who find ’em like that all the time. They’re usually more upset about it than I am. I find it fascinating. I like that this thing is happening. I feel like we’re all participating in a communal experience, like something significant and much larger than myself has come out of it, and [the destroyers] are as vital to the process as I am. I love them, whether they really hate me or not”. 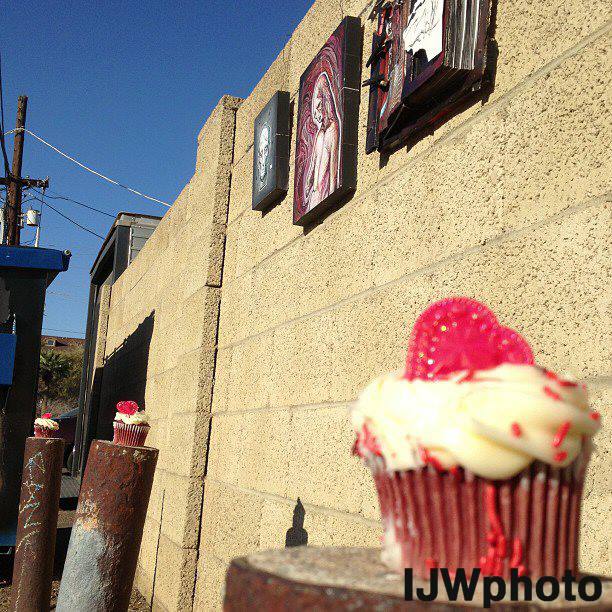 His latest project is the NXOEED Fox Hunt on July 26. He’ll be hiding 7 fox paintings in Tempe and 6 in Phoenix. He says he got the inspiration for the hunt by the fox he always sees at night when he rides around Tempe. He says he thinks it’s really intimidating and doesn’t know why he never painted it before. You can find clues on the night of the hunt on the Facebook events page.