Tangerine Dreams: The DanDan Noodles dish on their new record, Glendale and Jivemind experiment and grow. 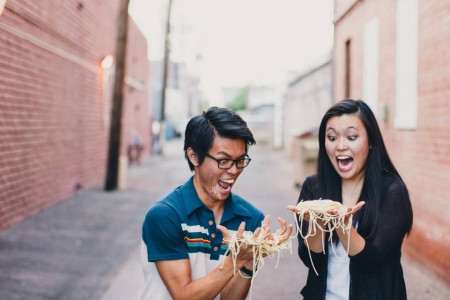 Driving down Glendale, you don’t pick up the vibe of an artistic city. You see all the familiar places; Pratt’s Pets, Cerreta’s Candy Company, the state’s first pot dispensary, not the D.I.Y. start ups and vibrant, spray painted walls of downtown phoenix, or the aggressively energetic college atmosphere of Tempe.  People endure the heat, carrying jugs of water or pushing grocery carts or strollers down the sweltering sidewalks.  A tattered banner strung over the street reads “Free concerts every Tuesday.”

Next to the Glendale Civic Center is a large, red brick building. It looks like the other city owned buildings in the area, but passing by a side door the sound of blast beats and death metal chugging can be heard. Something is afoot.

Graphic novel inspired art greats you at the door of Jive mind, the “Gym for Musicians.”  They are a collaborative music space partnering with the city of Glendale; equipped for audio recording, practice spaces, and live events and experimenting with an original business model, offering monthly memberships to musicians. To enter call a phone number posted on the door.

Local folk-pop band the DanDan Noodles arrive, bright-eyed and bushy-tailed, for another day of recording. The lobby is a community space, the kind of place you’d see in a 90’s T.V. show. Teens and 20-somethings can have good, clean fun; sit around couches and tables, and play board games and Nintendo. The walls are adorned with musical instruments and paraphernalia, everything a musician could need.

Standing between a mini-fridge and record plaques for famous screamo bands, brother and sister Dana and Dani Nguyen of the DanDan Noodles spill the beans on their experience at Jivemind.  Dani: “We met Jeff (Rose, engineer) at Fair Trade Café’ in downtown Phoenix a few years before Jivemind opened. He wanted to start a music lab. He was doing fund raisers and asked us to play.” 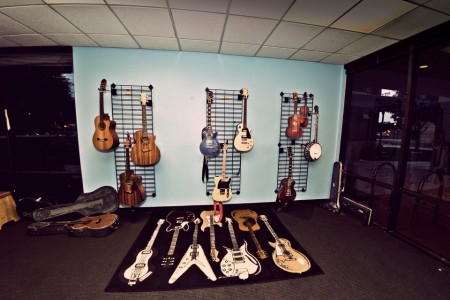 A few years later Jivemind acquired a physical location. Dana: “They were taking applications for bands that had drive and were going somewhere, to help them put out an E.P. for free, and give them a foot up.” The DanDan noodles were chosen, along with Field Tripp, Taylor Jayne, Avery, and Northern Hustle. The studio now looks to expand into publishing these songs in movies and television.

Two kids in Zelda hats walk into the room and get the tour from Jeff and the band geek out and delve into their process. Dani: “We’ve been recording this E.P. for a week; it sounds a bit weird…” Dana: “In a good way of course! Weird bands are awesome!” Dani: “We need weird bands, being normal sucks. Being weird should be the norm, even if that’s like, contradictory or something…”

Jivemind is a calm, professional space. From a musician’s perspective, it’s the kind of place you can work on an album for a week or two, without hustle and bustle or the constant grind of a financial axe. Dani: “Compared to other studios you might go to, it’s way… Less Nazi-ish.” 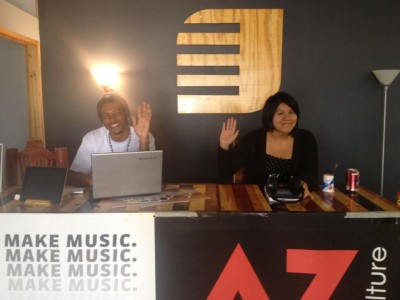 Dana: “Dustin (Chaffin, Engineer) is a musician. He speaks musician and gives and is open to suggestions.” Dani: “He’s not Iron fisted.” Dana: “He can bring ideas in your head out in real life, it’s mind-blowing. You can watch it evolve.” Dani: “Like Pokémon, you think it’s like, a Bulbasaur, but really it’s…” Dana: “A Squirtle?” Dani: “At least it’s not a Next-Gen Pokémon, like a fucking pair of dice with legs coming at you.” 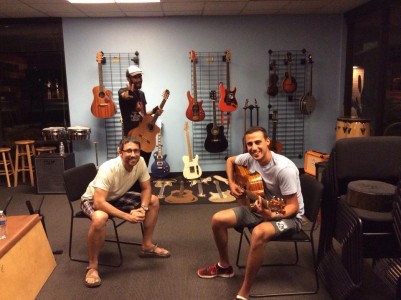 “The mixing room is filled with panels to break up sound waves, some of which are adorned with cartoon icons like Hey Arnold and Quail Man. Jeff Rose puts on a new DanDan Noodles track. It’s psychedelic pop, like Of Montreal but with a theatric, Bowie feeling to it.

The verses are filled with sweet harmonies and quirkiness. Their voices are crystal clear, earnest and pitch perfect. Jeff: “This song is about a bad pot trip when you were a teen, right?” Dani: “I wasn’t, but I felt like a teen.”

The catchy lyrics give way to sadness and poetry, the refrain repeats “You believe in something better, you believe in nasty weather.” This is perfectly complemented by the duo’s penchant for playing multiple instruments, giving them the ability to go to far out, Brian Wilson drug-pop territory with their tunes. They are slow and sad, up-beat and pretty, all in the same thirty seconds.” Dani: “A friend of mine said he couldn’t afford to be in love, I took that and turned it into a lyric.”

Listening to songs this good, freshly recorded and un-mastered, is a truly original experience. Creating something like this is rare, and a nurturing environment that facilitates this kind of art is also rare.

Jeff Rose: “I grew up in the valley doing music. You get tired of over-priced gear, retail, and bad practice spots. Gyms have an efficient business model, nice gear, and classes. We’re trying to build that kind of environment for musicians. We’re branching out into different back-end services, including memberships, studios, and production. We’ve learned a lot about partnering with a city, we’re on to something big.” 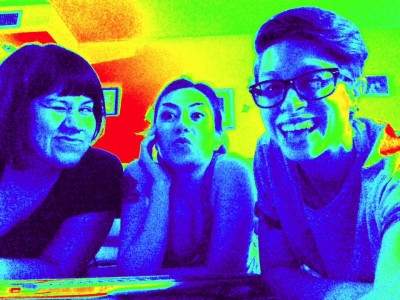 Jivemind has received a great deal of help from their engineer, Angela Garcia from local riot girl band Sedusa (named after an evil succubus from “The Power-Puff Girls.”)  She became aware of the studio through Glendale city councilwoman Norma Alvarez, who has been trumpeting the arts in the area and helped with the partnering of the studio and the city.

“She’s a freaking bad ass. She helps fund art and music programs for schools and gave me the newsletter where I heard about this place. I was at GCC for audio engineering.”

Angela helped set up the E.P. project, pointing the studio to up-and-coming bands in town. She contacted River Jones Music, getting Jivemind in contact with singer-songwriters like Serena Dominguez and Courtney Marie Andrews.  Angela, Cecilia Olea (former singer of nerdy, dark-surf band the Echo Bombs) and friend Yasmine Venezuela have been spreading Jivemind’s message through the valley music scene ever since.

Angela: “in the past few months, we’ve run sound for the Glendale Heritage and Folk Festival, Whoopee Daze at Tolleson Veteran’s Park (setting up for tejano bands), Fourth of July parties at both Tolleson and Westgate, and we’ve done live recording for concerts  for (local radio stations) 97.5 and 103.9, and recorded bands at the Van’s Warped tour. “

The studio is also looking forward to booking bands at the Westgate for festivities leading up to the Super Bowl. Angela: “Jeff was like, ‘If we could get anybody, who should we get, like, Garth Brooks?’ I don’t think anybody really listens to Garth’s stuff nowadays, and mostly Mexicans live in Glendale. I told him to get Los Lonely Boys, and he did! I Love them so much, the vocal harmonies are just… amazing! That’s like my favorite thing.”

Jivemind is located at 59th avenue and Glenn, in downtown Glendale, Arizona.

To check out the new album “Tangerine” by The DanDan Noodles, visit their facebook page at www.facebook.com/thedandannoodles.
—
Andy Warpigs writes music. Listen to it here.