Do Nothing Professionally: The Unsung Triumph of Prince’s “Under the Cherry Moon”

For every exalted individual in the pop culture echelon, there exist plenty of party-poopers who sneer at such praise and proclaim, “Psshh, they’re overrated.” However, these fuddy-duddies are fooling themselves if they talk such trash about Prince because there’s no way to overhype him. He was literally one of the greatest musicians who ever lived, and his touchstones are as good as music can possibly get. At his worst, he was still better than anyone else at their peak. Many folks eulogize the flawless 80’s era that spans from Dirty Mind to Sign O’ The Times. But this isn’t about those albums — this is about his rejected and forgotten cinematic follow-up to Purple Rain.

Purple Rain’s concert footage is the finest I’ve ever seen in a film–not only because of Prince but also because of the criminally underrated Morris Day and The Time and Apollonia 6 (groups that Prince created). It is not a good movie in any other way but it doesn’t matter; the soundtrack and concert footage are so good that the rest of the film could be a still frame of cow dung and I still would’ve watched it dozens of times. Perhaps it was so commercially successful because the context made sense to the viewer: Prince made a movie that centered around what he was known to do well, which was playing the jams. But Prince was something that people would never understand, and so it’s natural that he followed up Purple Rain with a black-and-white, Fellini-influenced flick that left most viewers flabbergasted. 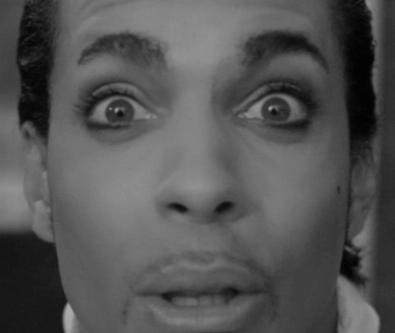 In Under the Cherry Moon, Prince played Christopher Tracy, a self-objectifying gigolo with a knack for sensuous stares and wise cracks. He and his best friend Tricky (played by Jerome Benton from The Time) live the lives of carefree swindlers in France until they both become smitten with a gal named Mary (Kristen Scott Thomas) who comes from a wealthy family. They compete for her affections, while simultaneously showing her that there’s more to life than socioeconomic hierarchy, so on and so forth. The plot is basic enough, but many factors set it apart from what one would expect of a Prince film. For starters, even though there are background tunes throughout the whole film (from the stupendous accompanying soundtrack, Parade), there are only two live performances. Can you believe it? Prince distanced himself from the only good element of Purple Rain – the concert footage! What a loon!

In place of Prince rocking out is an abundance of slapstick humor that brings to mind Abbott and Costello if they were wearing sparkly backless suits. It’s as if The Purple One wasn’t comfortable with being a goofball in Purple Rain, so his “The Kid” alter ego maintained a mostly detached disposition (except for when he was humping a stage), and all the comical opportunities in that film went to Morris Day and Jerome Benton. But in Cherry Moon, he was ready to reveal his own silly side to show Morris and Jerome how it was done. His animated facial expressions make Jim Carrey look like Ben Stein, and though a glass-half-empty person might call the gags confusing and asinine, I prefer the term “avant-garde”. When the jokes aren’t laugh-out-loud funny, they’re at least fascinating because they’re in Princespeak. 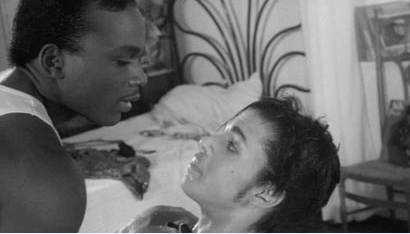 It seems that most people haven’t been able to handle such a clear perspective into Prince’s mind. The film won five Razzie awards, including one for Worst Picture. If it comes up at all while discussing Prince, it’s generally referred to as amongst the most colossal of his snafus. In the book Let’s Go Crazy: Prince and the Making of Purple Rain, Alan Light describes Cherry Moon as “a series of disasters” with characters “who were decidedly unlikeable”. Off the top of my head, I can think of at least two people with whom I’ve watched this movie who could not make it to the end. His follow-up film, 1990’s Graffiti Bridge returned to the world of Purple Rain, though with more of a supernatural musical vibe. It also flopped with critics and audiences, bringing an end to Prince’s cinematic career.

I believe that Cherry Moon is a misunderstood and brilliant film, but that’s beside the point. He had to know that making this movie would invite scorn, and he made it anyway. It’s hip for a creative type to say, “I don’t care about popularity, man. I do it for the ART”, but Prince walked the walk. If he gave a damn about acceptance, he wouldn’t have shunned the internet for most of his life and demanded that YouTube videos of him be taken down. (And I quote: “The internet is completely over.”) He wouldn’t have retired many of his most famous and risqué songs out of respect for his Jehovah’s Witness faith. He wouldn’t have changed his name to a symbol, which required a level of audacity that hasn’t been matched by any pop star before or since. As David Icke asserts in his tribute video, “A Memory of Prince-Beyond Normal”: “When you tune into these other levels of reality, as he did, then you’re not going to express yourself in the so-called normal way… When you are connected to something that’s outside the norm, then it’s very difficult for people who are not connected to understand where you’re coming from.”

An artist who wasn’t connected to something beyond this dimension couldn’t have made Under the Cherry Moon. For that reason alone, whether you end up loving or hating it, it’s worth giving Prince your extra time so he can show you what it’s all about.

Jason Kron is a mysterious and legendary Phoenix philosopher who is liked by everyone.