“Cameraperson” Gives Us A Fractured Lens To View Life 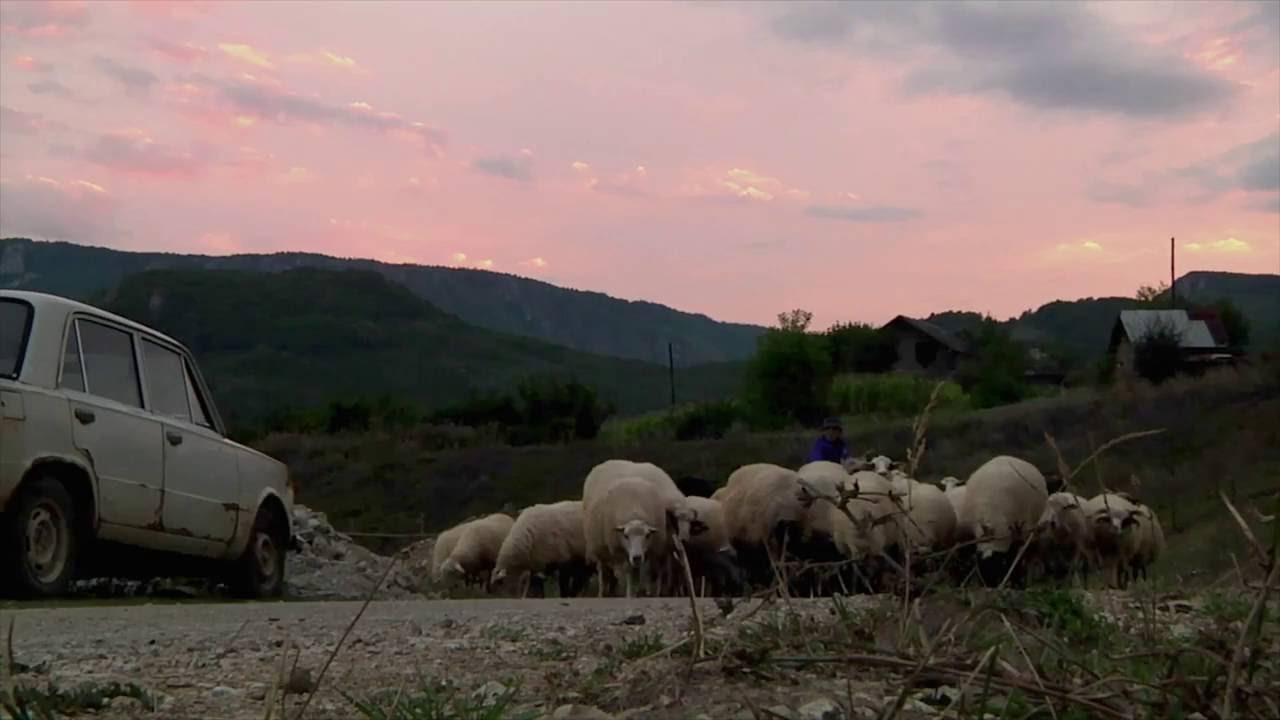 The sun sets on a dirt road in Eastern Europe. Under a pink sky, a flock of bleating sheep make their way up the slope of the hill. It’s a picture perfect image… well, almost perfect. Some weeds jut out, towards the bottom of the frame. A hand darts out and rips out the weeds. There- now it’s perfect.

This is the story of Kirsten Johnson’s documentary “Cameraperson”. Described as a “memoir of sorts”, it features footage Johnson has shot from a variety of other documentaries (many of it cutting room floor material). It hops from continent to continent, moving back and forth through different periods of time. Familiar faces like Michael Moore and Jacques Derrida appear on camera for a moment, never to be seen again.

What gives “Cameraperson” a through-line is that impulse we saw at the beginning: The refining of reality. “Cameraperson” is a powerful meditation on the role of the observer. What do we document? When do we interfere? What is true, and what is manipulated to seem like the truth? We hear Johnson off camera, coaching certain subjects on what to say. Sometimes it’s done out of sympathy, as they struggle to talk about something traumatic. Other times it’s like she’s a director feeding lines to her actors.

We watch a young child in Bosnia, playing with the sharp edge of an ax, and hear Johnson’s voice mutter “oh no” off-camera (but she doesn’t stop the child). We watch the attorney trying the infamous James Byrd Jr. murder case demur showing Johnson the photos of Byrd’s corpse, but he doesn’t hesitate to pull out the long chain that Byrd was dragged to death on for Johnson’s camera. We see her shoot the testimonials of Bosnian rape camp survivors and abortion patients at a low angle, so we can’t see their faces; we only hear their heartrending testimonies. Later on, though, we watch a young boxer have a humiliating breakdown after losing a match, and Johnson captures every second of his excruciating psychic flailing in public. It’s nothing like the horrors those women have endured, of course; it’s just interesting to see which flies get captured in the amber of film and which ones escape it. 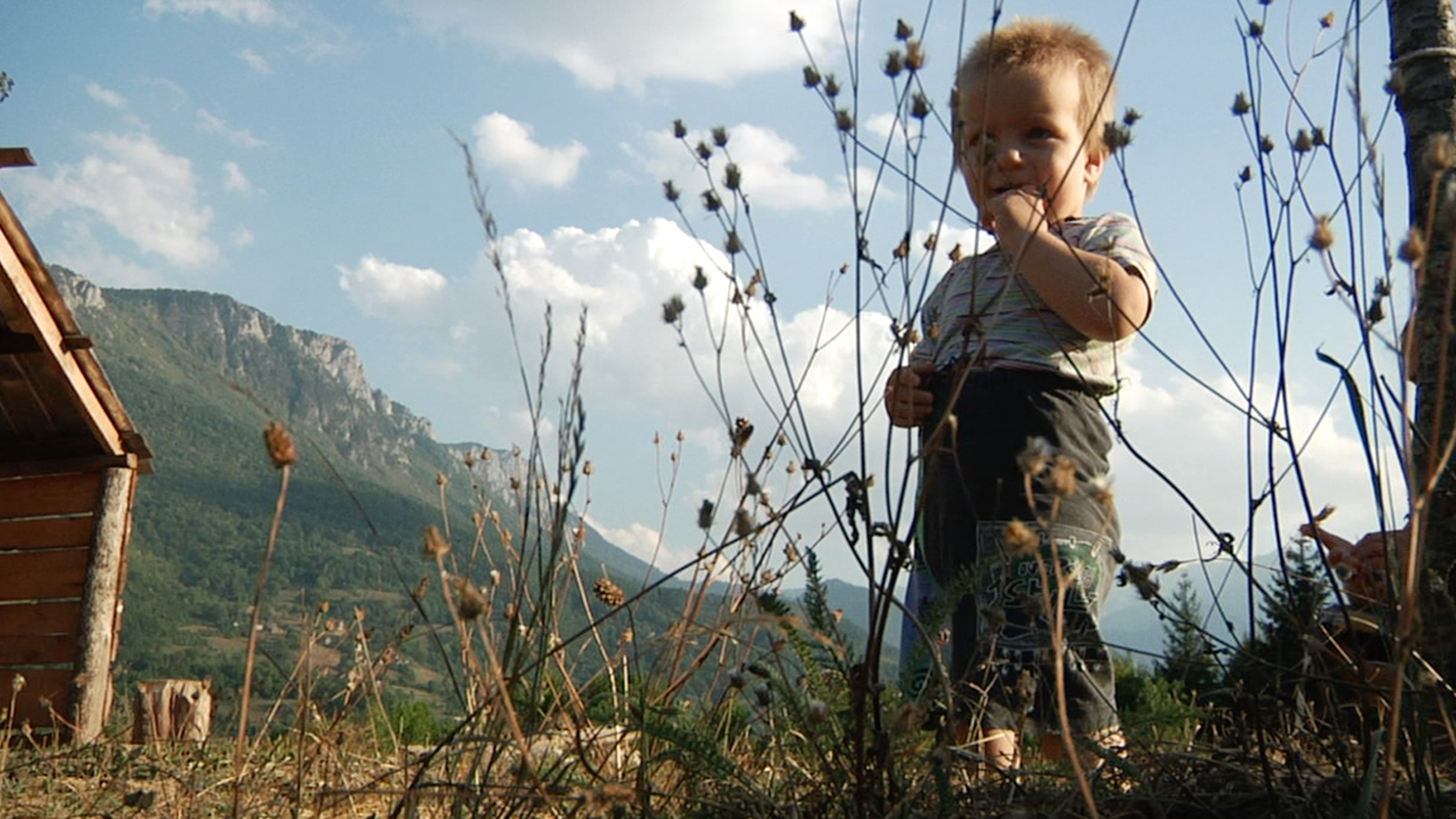 One of the most intriguing aspects of “Cameraperson” is how it offers up tantalizing slices of life that never get resolved. It feels a bit like Bunuel’s “Phantom Of Liberty”, a brilliant fiction film that would immediately switch to a new story as soon as the story you were watching was starting to get interesting… and it would never come back to that story again (if that format sounds familiar, it’s probably because it was one of the inspirations for Richard Linklater’s “Slacker”). We see Johnson burying a USB flash drive under layers of cement at an undisclosed location, presumably while shooting the Edward Snowden documentary “Citizenfour”. What happened to the USB drive? Was it ever retrieved? What was on it? What information was on it that was so sensitive that it had to be entombed in concrete? The film never comes back to it. Nor does it tell us what happened after Michael Moore offers to help a soldier pay for his legal fees, or what drives the hardened Bosnian investigator to research the region’s horrific ethnic cleansing, or where a bemused and ancient Derrida is off to in such a hurry, or what happens when she and her tour guide are ordered out of their car by Taliban guards.

There is no narration holding the film together, nothing to offer context aside from the images themselves and the occasional bits of conversation Johnson has her with subjects. What makes “Cameraperson” remarkable is how, in addition to being a meditation on the ethics of observation and journalistic detachment, it seems to encompass the entire breadth of human experience.

We witness births and see strangers experience the anxiety of pregnancy and parenthood. We see children at play and grown-ups struggle to do their jobs. We drift from white collar bureaucrats to teen athletes to weathered peasants picking fruits in cloudy fields. One minute we’re in New York in the 80’s, the next we’re in Liberia watching a street vendor in a lime green 50 Cent jersey trying to sell cheap radios. We see Muslims in a mosque, worshipping reverently and eyeing the camera with suspicion; we see young girls in white purity dresses ballet dance around a giant cross decorated with a bolt of white cloth. We see football games juxtaposed next to the hauntingly empty ruins of death camps, sites of mass death that are as quiet and peaceful as a cemetery. We see Johnson’s mother, losing her mind from Alzheimer’s, right after we see an old Bosnian woman who still has her wits firmly intact. And in those juxtapositions, we also see bits of Johnson’s life: her parents, her twin children, her childhood home, her mother’s ashes. Her anxieties and hopes and fears expressed by the Greek chorus of her subjects.

I have to admit: I teared up by the end of the movie. That feeling of traversing the entire human journey, from cradle to grave, in less than two hours is overwhelming. What makes it even more powerful is how universal it is: we see people in America, Africa, and Eastern Europe all worrying about the same thing. In a time where Otherness is becoming more pronounced and scrutinized than ever, it’s heartening to see a work that celebrates and underlines our connected nature as a species. No matter what box we tick off on a census card, we all have to deal with the same fundamental touchstones of being a mammal.

My car started acting up as I drove away from Valley Art, the engine misfiring from a coil that’s gone to shit. I drove home, praying the car wouldn’t break down on the 101, hoping it (and I, for that matter) would get back home in one piece. Even in that heightened state of stress, I couldn’t stop thinking about “Cameraperson”. Pulling over near the Thomas exit to batten down the hood of my car, I wondered what kind of picture I was making at the moment, and if there was some hand, human or divine, pulling out weeds in the foreground to perfectly frame my plight. Perhaps that’s why the belief in an omnipotent observer is so reassuring: No matter how huge or small the suffering, it seems just a bit easier to endure it with dignity when you’re imagining that someone else is bearing witness to it. 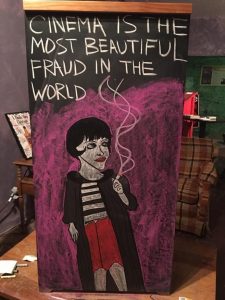 Chalked by the author