Statement of the Kennel Killer 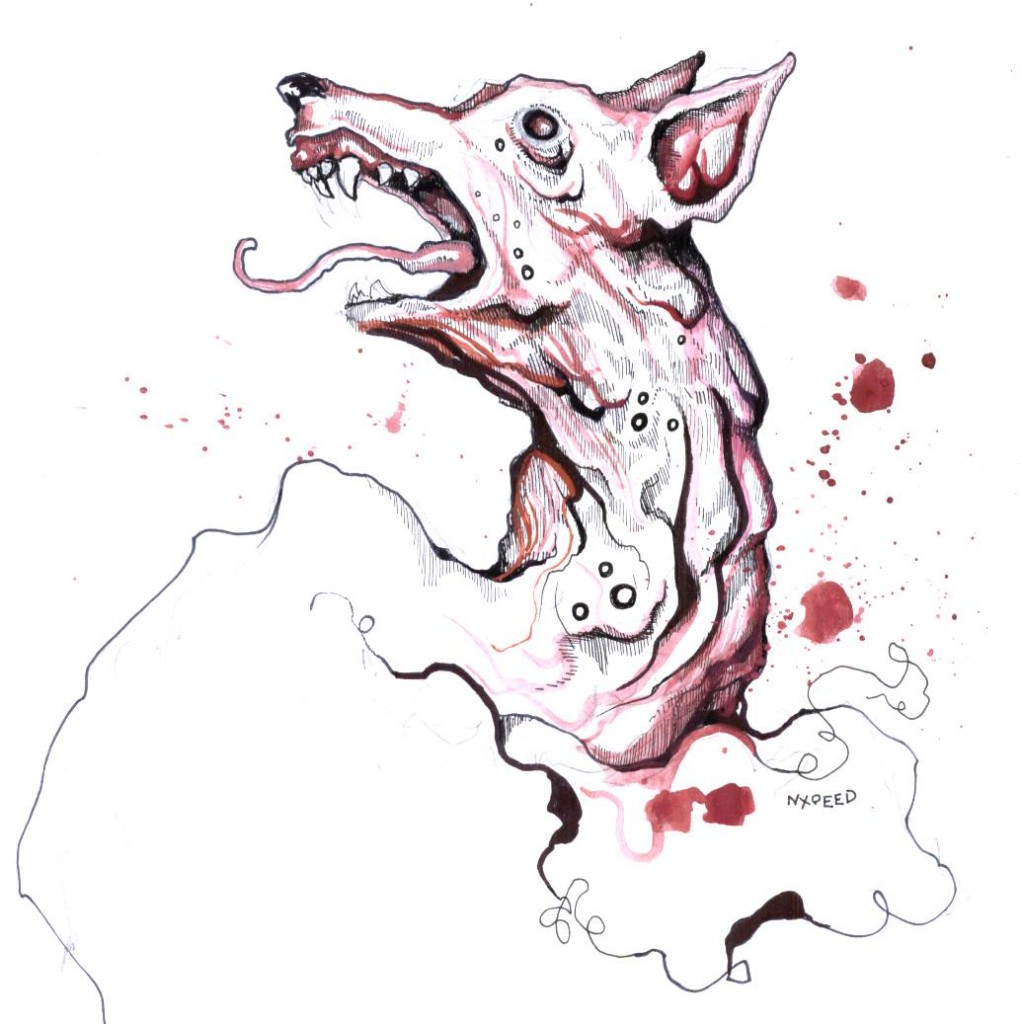 Or, What It’s Like To Euthanize Dogs for a Living

Yeah, me too. I like them enough to ritualistically murder them and carry their bodies to the funeral pyre.

I started working for an animal hospital when I was about 15, and quit when I was about 18. It was right behind my house; I would step out of my back gate and into the employee parking lot. The place wasn’t very large, but it was always busy, with many veterinary appointments every day. The main moneymaker though was the boarding and grooming, and that’s where I came in.

I was a pretty weird, greasy 15-year-old. Not like the awkward-but-funny underaged sitcom hero, but like weird. Like, wouldn’t look you in the eyes or ever speak weird. I really liked Star Wars though. I started working in the summer, and being the nervous wreck I am, didn’t talk or attempt to do much more than what I was assigned, since I was so afraid of fucking up. This meant I pretty much walked dogs, changed cat litter, and fed both varieties of creature. And laundry — lots of damned laundry. Surgery towels soaked in blood, beach towels soaked in urine. You get the idea.

Eventually, I became comfortable or whatever and could actually work instead of being a retarded mute robot, and I learned more and was given more responsibility. Most of the employees were unable to lift, so I started helping when muscle was needed. This meant I learned all the grooming shit, because only I could haul the fuckers up into the bath (which was set like 4 feet off the ground), and I would hold down dogs while they got their nails trimmed or ears cleaned or what-have-you.

Then, one day, I was surprised with the gift of a radiation overdose badge. I was now allowed to x-ray creatures. For some reason (I was a dumb kid) I was afraid of the machine, because I thought it would like burn me or something and I’d get cancer and die. That’s what happens when you give a dipshit a plastic badge with his name on it and when he asks what it is for you tell him that it measures radiation and will turn a different color when he is sterile. But I learned all the positions and how to hold critter arms at the proper angles to show their organs and such, and it was great.

Then, the next milestone was medical treatments. I was taught how to immunize, how to draw blood, give fluids (subQ, yo), administer all kinds of drops -eye, ear, nose, throat, butt, cooch, toe, shoulderblade – and also how to make an animal take a pill. It’s really easy, I’ll show you some time, and you won’t have to fuck with hotdogs ever again. Though you should give your dog treats anyway, because he/she is such a good doggie, yes he/she is.

Then I started helping with surgeries and more complex things. It wasn’t anything super cool – I would stand there for an hour with a mask on, holding a dog’s leg out of the way so the doc could sew shut the poor beast’s chest. It seems like I mostly helped with stitching up dogs that were injured in fights. Never sat in the operating room with a cat, but I did watch a rabbit get spayed once.

At some point, I started moving bodies out of the treatment room. They were always just these big black garbage bags, like the kind for grass clippings and yard junk and such. It was a little unnerving, but since I was kind of dumb I didn’t give a shit. When they saw that I wasn’t too cowardly about it, they started letting me bag the animals.

It was kind of weird putting bodies in garbage bags. Like, it’s not as easy as you would think, even though most of these animals were way less than half my size. That shit they say about dead weight is true. And corpses are floppy, which, when you’re trying to gracefully slide a creature that was just euthanized into a 40-gallon trash bag from Home Depot, caused me more than a little stress. I was such a corpse disrespecter.

Anyway, I’d hall them through the maintenance area to a big deep freeze unit in back. Yeah, kinda like the big chest freezer your grandma and grandpa have for when they make runs to Sam’s Club. Sometimes, the freezer would be full to the brim, and I’d be shifting around frozen bodies to fit in new, still warm ones. One time, when it was nearly empty, I saw a turtle in the bottom, just hanging out, no bag, you know, chilling (I had to make at least one pun).

The way this freezer was emptied was this: a big van from the crematory would come by and load up all these dead critters, drive em back to HQ and dump em all in a furnace. The company would burn all the husks together, measure out a certain handful of ashes into a container for each animal, and then mail us the containers which we gave (or maybe sold? I don’t remember) to the owners.

Truth be told, I never saw the crematory. It was some third party shit, you know, and I was more with the killing than the burning. Eventually I was allowed to be present at the euthanasia, and help out in some ways. It was weird seeing an animal euthanized. I’m sure many people have, as it isn’t an uncommon thing, but for those that haven’t, it’s pretty much just an old or sick animal lying there on some nice blankets, and then the doctor gives a couple shots, and the thing dies swiftly.

No death rattles, nothing too spooky, maybe a small drop of blood sometimes when the doc removed the needle, but that’s it. They always closed their eyes before they died. Well, the dogs always did. I’ve looked into the strange, fogged eyes of dead cats before. Birds too, but you can’t really tell the difference between a live bird eye and a dead one. Fuck birds. Freaky ass dinosaur mofos.

I never touched or tried to comfort the animals. I always just stood there with the “I should be sad right now because this is sad” look on my face. You know, the one kids wear when they’re at funerals and shit. I don’t think I ever stared at the animal through the whole process, either; I would watch for a bit, look away, and when I turned back it would be still, with its eyes shut.

Right after death, we would take the beast’s paw (if it was a mammal – reptiles and birds knew no such niceties) and press it into a little bit of Super Sculpy, and later we’d fire that shit in the autoclave so the owner’s could have a memento. It was weird, to be sure, sitting on the linoleum floor, rolling up a ball of cheap clay between my hands and flattening it against a dead animals foot, then putting it in the small oven alongside the tools used in surgery that I had washed earlier. It sucked, and eventually it made me sad.

I think the turning point was this huge dog, this enormous Doberman, who was old and feeble. He could barely walk because of yadda yadda “doggy whines too much, let’s get him deadified”. Despite his age and decrepitude, he still came up past my waist and weighed 80 pounds, even though he was literally skin and bones. It was insane to me that this dog, which had clearly been massive, the very definition of a dog, was stumbling around with bald spots. At the time, I didn’t think that this was how life works, how everything ages, gets sick, and dies because I was dumb, but it still made an impression on me. He was especially hard to carry to the back.

I don’t actually remember the names of any animal I saw euthanized. I don’t even remember what they looked like, save the big Doberman. There are other weird things I remember, though, like that time the freezer broke. It was in June or so in Phoenix (which if you are at all familiar with the place means that it was hot), and the thing just broke. I forgot why, turns out it blew a fuse or some freon leaked out or something, but yeah, the thing was broken, and since it was all the way in the back, past the laundry room and maintenance room, in it’s own little brick building that was added on to the main structure, no one would be able to hear when the repairman knocked on that door (he came after hours). So I sat back there and waited for him. It was a long day, and I was starving, so I didn’t eat my lunch (which for once I brought that day instead of just going home and eating) so I ate it while I waited. That’s right, I sat on top of that busted chest freezer full of bodies that were slowly thawing and ate a salami sandwich. It smelled… weird in there. It’s a somewhat unique smell, if you haven’t smelled it, but I’m sure you could guess. For this reason stenches of the dead do not bother me.

I learned a lot, and I mean a LOT of things at the hospital. I now know a good deal about dogs and cats (never learned much about other small mammals except they bite a lot), couple things about lizards, and a surprising amount about medicine and anatomy/physiology in general. I can’t like, diagnose shit, but I can do many other things. I lost a lot there, too. I lost my fear of blood and other bodily fluids; I lost the disgust of certain smells such as the poo of a crazy-sick animal, old blood, bleach mixed with simple green, stuff spilled from guts, the anal gland scent (though I still hate vanilla… fucking wretched vanilla) and I lost the disgust/fear of visual things like gore, horrible diseases, parasites (I used to have to dig through turds to find worms to put in test tubes), etc. I guess I lost a lot of tears, too.

I’d do it again, though, and that reminds me- I’d better start looking for jobs again before my dad gets pissed. Let’s see if indeed.com has any animal hospital jobs…

A Quick Guide to Sex Addiction
The Breakfast from Qlipnor

And some other heavy shit:
Did Capitalism Destroy Traditional Marriage? Uh, Probably.
An Esoteric but Brief Epistemological Diversion